…As He Blesses Oraeluno’s New Home

The Catholic Bishop of Ekwulobia Diocese, Most Rev Peter Okpaleke, has charged the people of Achalla Community in Awka North Local Government Area of Anambra State, to discard their old ways and embrace Christianity. The Bishop stated this in Achalla at the opening of the new home of Mr Raphael Oraeluno, last Tuesday.

Speaking after Mass to the appreciable crowd that graced the occasion, the Bishop expressed the hope that the community was now on the path of progress and had done away from their old ways.

Bishop Okpaleke thanked the monarch, Igwe Sunny Nwokedi, and prayed God to guide and give him wisdom to lead his community like his late father did. 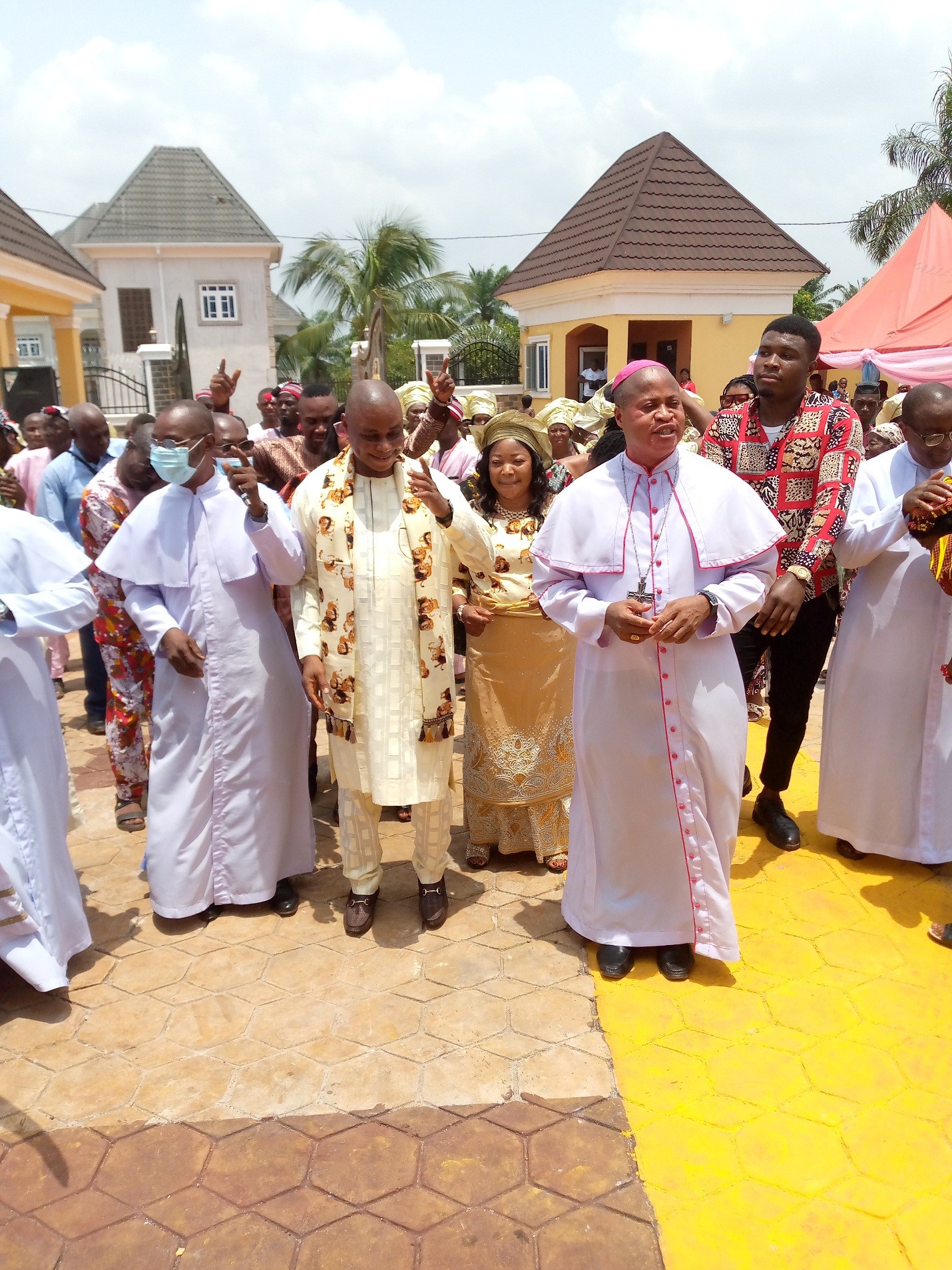 Bishop Ebere Okpaleke, 1st from right, in front, dancing with Mr and Mrs Oraeluno, immediately behind him; and others, shortly after blessing the new home of the Oraelunos in Achalla, Awka North LGA, April 6, 2021.

He noted that God had given the traditional ruler a new opportunity to serve his people and Church well, assuring that the future was bright.

Bishop Okpaleke said it behoved the leadership of the community to take the first step and harness all the resources around them to become a modern, successful community, saying it was the duty of the traditional ruler to lead the charge.

He commended Bishop Paulinus Ezeokafor of the Catholic Diocese of Awka for permitting him to officiate in the Mass to mark the house warming.

The Bishop commended his host, Oraeluno, for recognizing the importance and power of the Holy Mother Mary for whom he built a grotto and said it would bring blessings to the family, even as he prayed for God’s protection for the family.

Speaking later, Mr Oraeluno thanked the Bishop and his team for honouring his invitation. He also thanked the present and past parish priests of the parish in Achalla; indigenous Achalla priests; classmates in the seminary; the traditional ruler of Achalla, and his family, saying that he felt honoured by their presence.

A director in the Federal Civil Service in Abuja, Oraeluno who said the house was a product of twenty years of patient toil, said it had been his dream to have a home dedicated to God and affirmed that God’s time was the best.

He recalled the challenges he went through in building the house and how he overcame them by God’s grace. He expressed the hope that the Bishop’s visit would open the doors to stronger Christianity in Achalla Community.

The new home, apart from the grotto, also has a chapel, both of which were blessed by Bishop Okpaleke along with all the rooms in the home.