The Auxiliary Bishop of the Catholic Diocese of Awka, Most Rev. Jonas Benson Okoye alongside his siblings last Thursday, 30th September, bid adieu to their late Brother, Mr. Paul Izuadimma Okoye, who joined the heavenly saints on 10th of August, 2021.

Fides gathered that the late Paul was born during the civil war in 1967 at Adazi-Nnukwu and was an entrepreneur who dealt in clothing before his death. 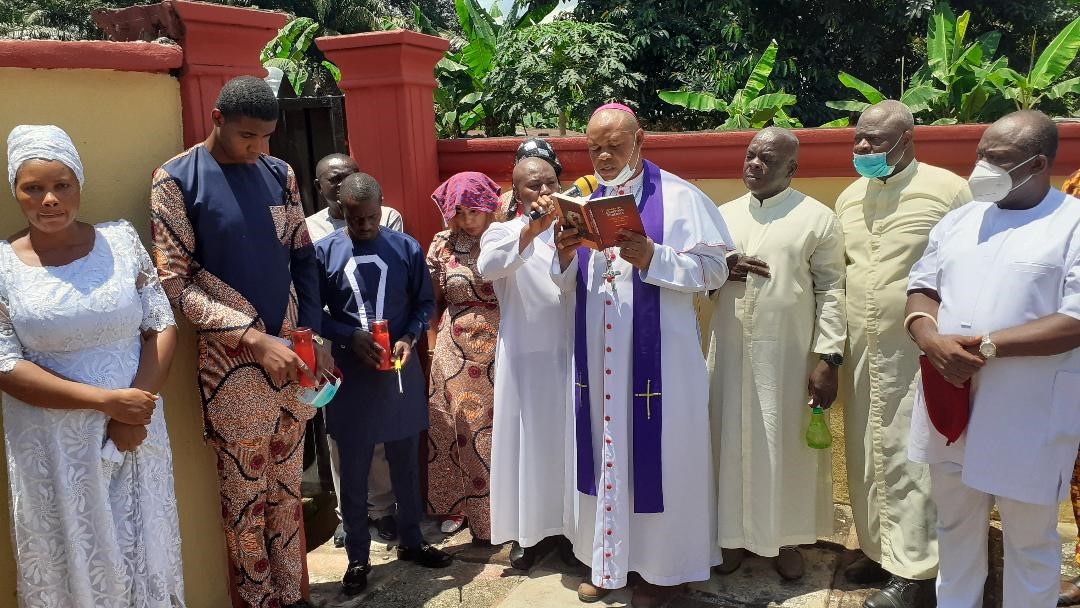 The funeral rites of the deceased witnessed the presence of the Anambra State Governor, Chief Willie Obiano, among other prominent individuals and indigenes of Adazi-Nnukwu who joined the Okoye family in mourning the demise of the deceased.

Leading in the Mass, Bishop Ezeokafor consoled the family over the death of their brother and described death as a necessary end that awaited all mortal.

In his homily, Bishop Peter Okpaleke of Ekwulobia Diocese condemned the violence going on in the state and beckoned on Gov Obiano and security outfits to draft modalities on how to curtail the growing insecurity which, he said, had instilled fear in people.

He reminded the faithful that their earthy existence was to prepare them for heavenly bliss and urged them to strive for heaven. He commended the deceased who bore the pains of sickness for a long period and explained to the faithful the importance of imbibing the virtue of suffering.

He regretted that most people ran from pillar to post in search of solution to problems and were most often led astray by soothsayers, seers, fortunetellers, and some pastors who had lost contact with the spirit of God. He said that Christian suffering was inevitable in life as it was bound to come and urged them to pray to encounter the suffering which they could bear.

In his remarks, the Governor of Anambra State, Sir Wilie Obiano, said all necessary apparatuses had been put on ground to curtail the insecurity in the state and urged the Okoyes not to weep like people who had no consolation in life after death.

Speaking to Fides, the elder brother of the deceased, Bishop Jonas Benson Okoye, said his late younger brother would be remembered for having a beautiful soul and said he never settled disputes between the deceased and anyone while alive. He described the deceased as a hardworking man who had built a legacy for his family and noted that his late brother prepared his home before passing away.

He revealed that his late brother battled with kidney problem for three years and shouldered the difficulties associated with the illness in good faith without getting the family members involved until one of the brothers visited and discovered his health condition.

He urged the immediate family to remain strong, saying that it was important for the wife to sustain the children in the spiritual life and to be careful of her dealings, especially as it concerned carrying on with the business.

He said his younger brother before his death was deep in the Catholic faith and was the Vice Chairman of the parish laity council, the patron of block rosary, choir and another group at St. Stella Maris Catholic Church, Azikoro, Yenegoa, Bayelsa State.

The eldest brother, Mr. Christopher Okoye, and the deceased’s only son, Chibuike Okoye, thanked God for the life style of the deceased and maintained that his brother and son was a hardworking man who put others before himself, an embodied peace; even while deriving joy in settling disputes among people.

In his condolence message, the Bishop of Nnewi Diocese, Most Rev. Hillary Odili, urged the family members and others who were touched personally by the death of the deceased to take heart, bearing in mind that the dead had joined his maker.

He emphasized the importance of living a good life and tasked them to start making plans for their last day when they would journey to the world beyond.

The CEO of Jezco Oil, Sir Josephat Ezeokafor, likened the family to those who had faith in God and beckoned on them not to question God as he knew all things.