The auxiliary Bishop of the Catholic Diocese of Awka, His Lordship Most Rev. Jonas Benson Okoye has presented a car gift and Pope Francis Papal Blessing to Chief Michael and Lolo Theresa Ezeonwu.

Pope Francis Papal blessing was conferred on the couple together with an SUV car of QX4 Infinite Model by Bishop Okoye on 2nd January, at St. Augustine’s Catholic Church, Ichida, during the couple’s marriage Golden Jubilee.

Presenting the car gift on behalf of the celebrants children after its blessing, Bishop Okoye appreciated Chief Michael and Lolo Theresa Ezeonwu’s children for their thoughtfulness and gifting their parents with an SUV car, noting that the gift would facilitate their movement within and outside their immediate  community. 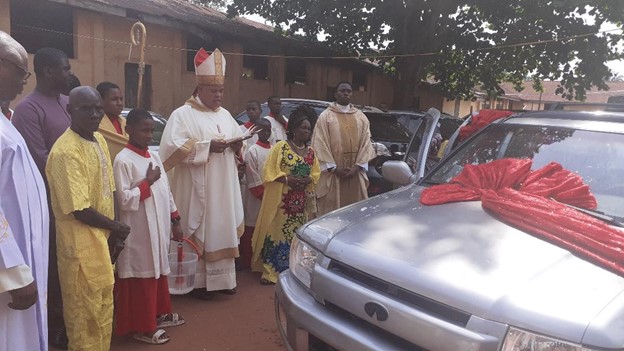 He explained that the car gift and 50th Years Celebration of marriage organized for the couple was in line with the teaching of the Catholic Diocese of Awka on need for benefitting the living as against benefitting burial. He noted that it was important for people to celebrate their parents during their life time rather than doing so at burials.

Leading in the concelebrated Eucharistic Celebration that commenced the Golden Jubilee, Bishop Okoye congratulated the couple, saying that the celebration was a product of steadfast love, understanding, humility and tolerance which had existed among the couple.

He maintained that young and intending couples have a lot to learn from the celebrants, noting that their marriage had stood the test of time having passed through various difficulties which the marriage had been posed with over the years.

Speaking to Fides, the Traditional Ruler of Ichidia Community, Igwe Charles Ezeudogu, while congratulating the celebrant appreciated God for making it possible for some indigenes of the community to reach the marriage golden age. He described the family as peaceful, loving and law-abiding, saying that the nature of the celebrants was what paved ground for one of their children to go into the ministerial priesthood.

Contributing, the celebrants’ son, Rev. Patrick Ezeonwu, Cssp, said that the Golden Jubilee of his parents portrayed God’s excessive love for the family of Ezeonwu. He thanked God for the gifts of his parents, noting that the training which he received in his formative years was what contributed to the holistic individual which he had become. He attributed God’s grace and love which his parents had for each other as what enabled them to achieve success in their marriage.

Chief and Lolo Ezeonwu, the Jubilinarians who renewed their marital vows after fifty solid years of successful marriage, said young couples should learn how to understand themselves to reduce the rate of divorce which was on the high side. They identified family prayer, respect, patience and transparency as key to happy and successful marriage.

They revealed that the golden Jubilee Anniversary was to thank God for his mercies and endless love which kept them together in marriage for the past 50 years, noting that their marriage was a successful one as they were able to learn from their mistakes and shortcomings which assisted them in making amends where necessary.

The celebrant identified couple’s inability of taking decision together especially as it relates to child effective upbringing as major challenge facing most families and warned couples against unnecessary display of affection towards a particular child, saying that such attitude introduces hostility in the family.

They advised young and intending couples on the need of developing trust among themselves and to always take collective decision when dealing with their children to avoid unnecessary siding on the child’s side by one parent, noting that marriages tend to clash more easily in scenarios where the husband or wife sides the children against the other’s corrective measures.