The Auxiliary Bishop of the Catholic Diocese of Awka, Most Rev. Jonas Benson Okoye, has inaugurated the 2020/2021 Academic Year for Loretto Special Science Secondary School, Adazi-Nnukwu.

Bishop Okoye inaugurated the Academic Year on Sunday, February 14, during the investiture of 270 new students of the Catholic owned Institute of Excellence.

The inauguration and investiture of the new students was an opportunity for the school management and the 1994 set to reward diligent and academically outstanding students in different subject areas. 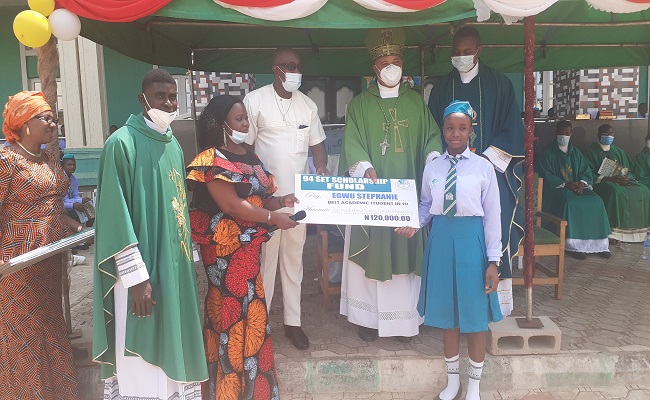 Addressing the students, Bishop Okoye emphasized the need for the students to make effective use of the facilities provided by the management and develop their inherent potential geared at rendering solution to some human problems. He said that the only way the students would reciprocate the efforts and financial contributions of the parents was to be dutiful in all their school activities as such brought excellence.

The Catholic prelate who unveiled the 2020/2021 academic hall of fame, congratulated the students that emerged best in various subjects and charged them on the need for consistency, saying that it would promote healthy competition.

‘I must congratulate those students who emerged best in different subject areas for their outstanding performance which I know can only be possible through committed effort. Others must however must strive to overtake these ones at the end of the academic session,’ he stated.

Presenting the cash award to some students who distinguished themselves according to the criteria mapped by the 1994 set of the institution, Mrs. Chinweoke Ifeanyi-Obi, said that the award was instituted in 2019 to mark the set’s silver jubilee after their graduation from the college.       She explained that since the set with its minimal resources was not able to embark on any structural project, they decided to set-up a scholarship scheme to award students and teachers who had distinguished themselves.

The scholarship scheme, which, she said, would run for 3 years, was geared at promoting healthy competition in different fields of the school.

‘ Excellence is not achieved in any field of human endeavour simply by wishful thinking or by willing away one’s time and opportunities, hoping that at the end, excellence will be achieved. Here in Loretto, Excellence is our Pride,’ Fr Azodo said.

He also urged all the students to study hard in order to attain enviable heights of excellence. ‘Let your motivation spur you to hard work, such that guarantees excellence,’ he added, noting that good intentions to excel were not enough.

For her part, the Principal, Lady Eugenia N Okafor, who appreciated the unalloyed support of the Most Rev Paulinus Ezeokafor and his auxiliary, Bishop Jonas Benson Okoye, said that the Prize Giving Day was geared at celebrating the students’ excellence.      She said the exercise was aimed at impacting positively on the students, especially deviant ones, who were expected to key into the trend and work towards improving their results and habits.