…Calls for Mutual Understanding among Couples

The Bishop-Elect of the Nnewi Catholic Diocese, His Lordship, Most Rev. Jonas Benson Okoye, has conferred Pope Francis’s papal blessing on the Chief Executive Officer of Agary Pharmaceutical, Mr. Cosmas Ubajaka and wife, Mrs. Uzoma, in celebration of their wedding silver Jubilee anniversary.

Presenting the papal blessing from the Supreme Catholic Pontiff during the simple and quiet marriage anniversary get-to-together put up by the couple on Monday, December 27, at their residence in Nnewi, Bishop Okoye charged couples on mutual understanding and underscored its importance in the sustainability of any home.

He said that the silver jubilee was in thanksgiving to God for the togetherness and love existing between the couple. He noted that for marriage between a husband and wife to withstand the test of time, love, faithfulness, understanding mutual respect, among other ingredients, must be present. 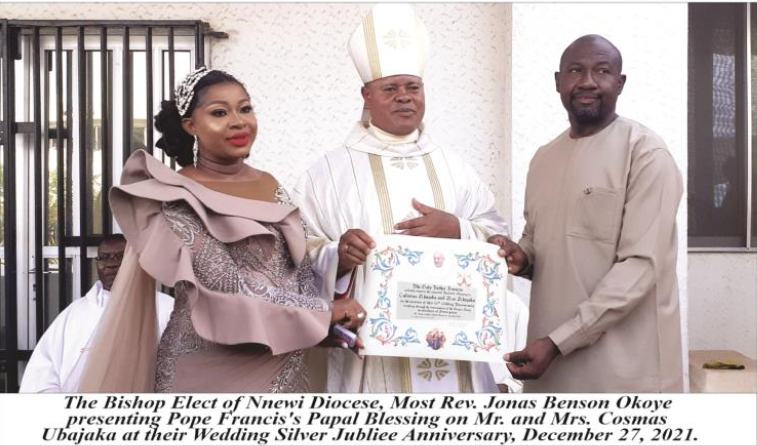 Bishop Okoye who had spent over two decades at the Awka Diocesan Marriage Tribunal before his episcopal appointment, described the Sacrament of Matrimony as a difficult one that must be guided as it had lots of mysteries embedded in it by God. He said that husband and wife should be one, just as Christ and his Church, noting that oneness gave no room for divorce.

He enumerated the responsibilities that God had bestowed on every family member and noted that it was important for all members of the family to carry out their assigned responsibilities judiciously.

Earlier in his homily, Bishop Okoye advised fathers on the need for them to respect, love and guide every member of their family, irrespective of the position they had attained in society. He maintained that respect created room for bonding and brought forth peaceful co-existence within everyone in the family. He charged the fathers to always bear in mind that the home could never be compared to anything on planet earth and urged them to desist from creating fear, saying that such negatively affected them at old age.

On the side of the mothers, the Catholic prelate beckoned on wives to love their husbands and cover up their husband’s inadequacies even when they were the family breadwinners. He said that love and respect must be sacrosanct for everyone in all families, saying that respect had a reciprocal effect. He disclosed the benefits which children tended to derive from honouring and respecting their parents and other people.

He beckoned on the jubilarians to continue with the love which had kept them together for the past 25 years they had been in marriage, irrespective of the storms and challenges they had faced.  He urged the children to carry on with the training which the parents had been given them and to represent the Ubajaka family in good light wherever they found themselves.

Speaking after the Concelebrated Silver Jubilee Mass, the celebrant and CEO of Agary Pharmaceutical, Mr. Cosmas Ubajaka, said the 25 years in marriage had been sustained by God and appreciated God for giving him a peaceful home where he retired to after each day’s chaos. He described the support from his wife and children as phenomenal, noting that it had assisted his growth in an unprecedented manner.

While appreciating Bishop Okoye’s presence, he explained that perseverance and effective communication assisted in solving martial problems. He underscored the importance of love, saying that it conquered all things.

‘Showing love to my neighbours is what I have been practicing all this while. My first neihgbour is my wife, then my children and those living near my neigbourhood. I want to use today to specially thank my wife and children for their love, support and understanding, irrespective of my shortcomings,’ he concluded.

Fides gathered that the private celebration held in the residence of the Ubajakas had renewal of marriage vows, exchange of rings and presentation of Pope Francis’ Papal blessing, and cutting of the anniversary cake as highpoints.