The auxiliary Bishop of the Catholic Bishop Diocese of Awka, His Lordship Most Rev. Jonas Benson Okoye has commended the Children of Lady May Uche Otugo for celebrating the graceful life of their matriarch at 80.

Bishop Okoye made the commendation at St. Vincent’s Catholic Church, Nimo, Njikoka LGA, Anambra State, during the concelebrated Mass that commenced the birthday bash organized by the children of Lady May Otugo, on the 29th of December, 2020.

He explained that such celebration was in line with the church’s teaching of benefitting the living and not benefitting the dead. He maintained that it was important for people to imbibe the habit of celebrating and taking effective care of their aged parents while alive rather than throwing up extravagant parties at the death of such a person. 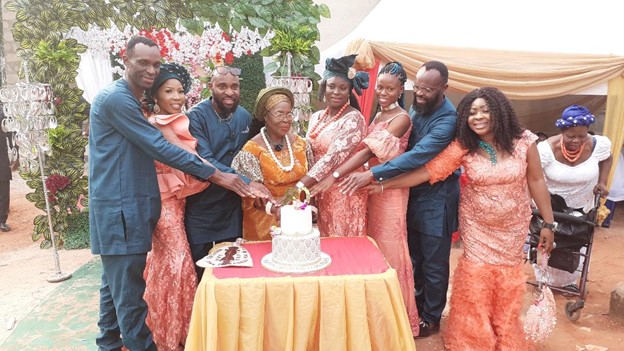 Lady May Uche Otugo, 3rd left, assisted by Her sons and daughters in-law in cutting her 80th Birthday Cake.

Leading in the Eucharistic celebration, Bishop Okoye,noted that God’s gift to humanity should be humanity’s gift back to God, saying that such was evident in the life of the celebrant. He described the celebrant as an amazing individual who has integrity and has been faithful and strength-forward in all assigned duties both in the church and elsewhere.

Fides gathered that the birthday celebration put together for Lady Otugo who had witnessed earth’s eight decades, wandering life storms laced with lots of challenges  availed the celebrant’s children opportunity of appreciating the contributions of their Mom. The children collectively disclosed to Fides that the phenomenal life lived by their mom had impacted positively on all of them and described her as their super heroine.

Speaking to Fides, the Celebrant, Lady May Uche Otugo, LSM, who was overjoyed appreciated God for the gift of life, children and other achievements which she had recorded in her life. She acknowledged God as the number one factor that led to the success recorded in the training of her children, saying that without God nothing would have been possible.

She explained that she had celebrated her 80th Birthday which was on 10th September, 2020 at Morning Mass for those always regular at morning masses.  She thanked her children for organizing a more extensive bash for her, saying that the celebration created platform to old friends after a long while.

She said that her contributions in the church as a member of the CWO in Nimo brought recognition and untold satisfaction in her inner heart. She described herself as the happiest person on earth, saying that she feels anew celebrating her 80th Birthday.

One of the celebrant’s son, Barr. Tochukwu Otugo, while thanking God for the gift of their mother’s life, said it was a privilege given to them by God to celebrate their mom at 80. He recalled the numerous sacrifice which their mom made during their formative years, saying that they can never repay their mom.