The Catholic Bishop of Nnewi Diocese, Most Rev. Hilary Paul Odili has regretted the loss of lives that followed the violent attack on worshippers by gunmen at St. Philip’s Catholic Church, Ozubulu in 2017.

The Bishop who spoke while dedicating the Church, urged christians to recognise the sacredness of the Church as an institution “under the authority and guidance of God.”

He said that Christ exemplified love and advised Christians to love one another, noting that “love for mankind sets the christian religion apart from other religions,” and encouraged all to overcome evil with love. 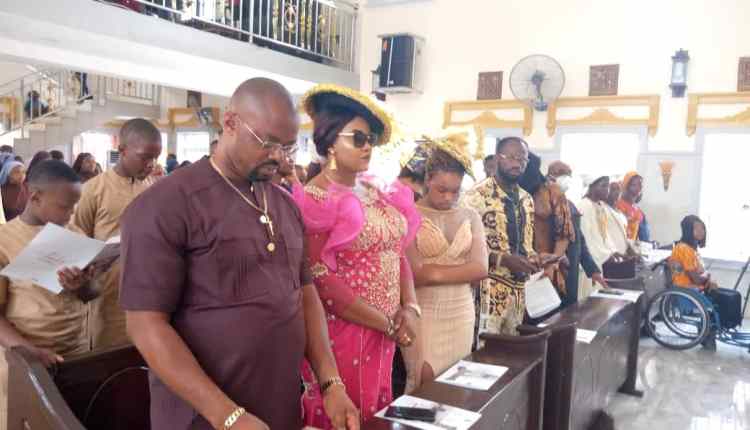 He said being the house of God, the Church should be a house of prayer for the faithful not a place “for politics” and warned against using the church for other activities that do not give glory to God.

The Prelate prayed for God’s guidance on the Church and the people throughout the year and declared ‘that the gate of hell will never prevail against the Church.”

He thanked Chief Aloysius Ikegwuonu for single handedly building St. Philip’s Catholic Church, Ozubulu and for his generous benefaction to the Church and mankind and prayed God to bless him abundantly.

Speaking during the occasion, Chief Aloysius Ikegwuonu thanked God for using him as an instrument for the service of mankind.

He also thanked the Church for their prayers that helped to sustain him after the tragedy that befell St. Philip’s Church three years ago and prayed that such ugly incident would not be experienced again.

The dedication ceremony was also attended by some Catholic Bishops, Catholic priests and the Traditional Ruler of Ozubulu, Igwe Fidelis Oruche, among others.

Highlights of the event were the dedication of the multi-million Naira Church, Grotto and a Chapel all built by Chief Ikegwuonu.