Bishop Ezeokafor Restates Call to Nigerians to Get their PVCs

The Catholic Bishop of Awka Diocese, Most Rev. Paulinus Ezeokafor, has called on Nigerians to shun voter apathy and obtain their Permanent Voter Cards (PVCs) to vote in credible leaders in the 2023General Elections.

Bishop Ezeokafor who decried the worrisome state of insecurity and unemployment in the country, noted that it was necessary for all Nigerians who had exhibited voter apathy in the past, to take advantage of the forthcoming general elections to vote in credible leaders. 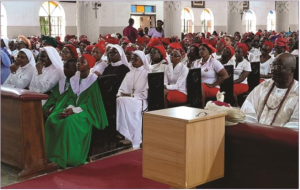 On security, while commending the Anambra State Government for its new measures and commitment to fighting insecurity in the state, the Chief Shepherd of the Catholic Diocese of Awka called for concerted efforts towards winning the war against insurgency and the high rate of kidnapping in the federation.

He stressed that all needed to be done to combat the menace, which, he said, had led to loss of life and property and grossly affected the economic lives of Nigerians.

Bishop Ezeokafor called on Nigerians, particularly Christians, to unite in the face of insecurity and other challenges, even as he also admonished everyone to take the 2023General Elections seriously.

He said, ‘The Nigerian election was a situation of cash and carry politics and we must change the narrative now.

‘I commend the Nigerian youths for thinking out of the box, the future of Nigeria is yours, fight for it now.’