Ten senior seminarians of the Catholic Diocese of Awka, who have completed part of their formation to priesthood, were last Tuesday, August 31, incardinated for their diaconal ordination by the chief shepherd of the diocese, Most Rev Paulinus Ezeokafor. 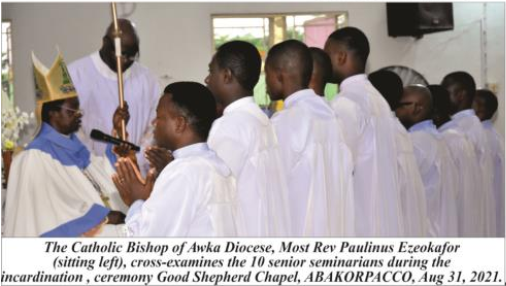 It was on the occasion of the 2021 Mass of Incardination, otherwise known as Mass of Candidacy of the diocese, led by Bishop Ezeokafor at the Good Shepherd Chapel of Archbishop A.K. Obiefuna Retreat, Pastoral and Conference Centre, Okpuno (ABAKORPACCO).

Fides gathered that following the Mass of Incardination, the ten seminarians have now been penciled as possible candidates for the diaconal ordination of Awka Diocese which is fixed for December 18, 2021. Their bans for the ordination will be called in their various home parishes in line with the rites for Diaconal Ordination. 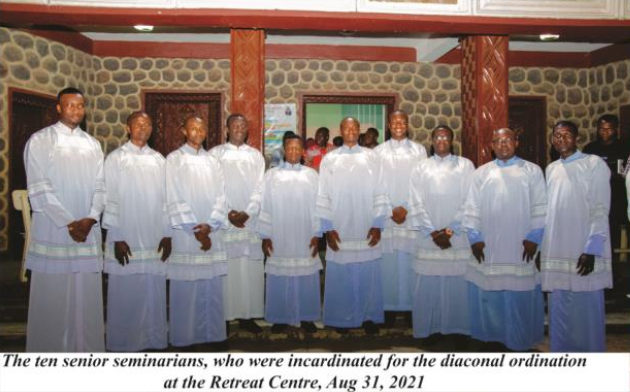 They took their oath of allegiance in perpetual service to the Lord in the course of their incardination.

In his homily of the Holy Mass, Bishop Ezeokafor explained that the call to God’s service was a very important one. He identified perseverance and zeal as the key attributes every individual, especially those on priestly formation, needed to have to excel in their formation.

According to him, lack of perseverance and zeal, among other reasons, had caused many persons to drop out of their formation to the priesthood.

The Catholic prelate, who commended the ten seminarians for what he described as their wonderful disposition to their formation, lauded them for the good reports they had from the one year apostolic work that preceded the incardination. 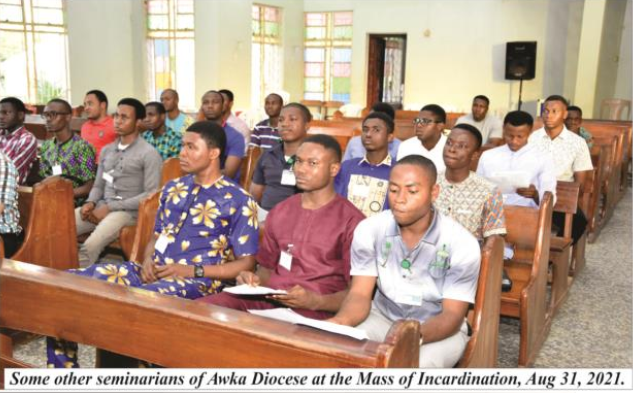 In an interview with Fides, one of the seminarians, Udodi Vitus Onyekaba, expressed joy for the privilege he had to serve in God’s Vineyard.

‘I am so excited to be part of those incardinated. I appreciate my spiritual fathers for believing in me. We are being told to prepare for our diaconal ordination which comes up on December 18, 2021. I thank Almighty God for making this day a reality,’ Seminarian Onyekaba said.