The Catholic Bishop of Awka Diocese, His Lordship Most Reverend Paulinus Ezeokafor, has exhorted Nigerians to avoid being influenced by money during next month’s general elections in the country.

Bishop Ezeokafor who made the appeal in his New Year message, said it was time for the electorate to declare their stand on how to better the country.

He decried the poor governance in the country, which, he said, had led to untold economic hardship, insecurity and unemployment, and added that there was need for change to liberate the masses from what he described as literal bondage. 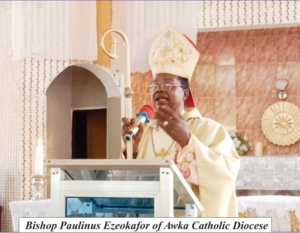 The charismatic and influential prelate asked those who were yet to collect their permanent voter cards to go and collect them as they were the only instrument to use to better the country.

The Local Ordinary expressed the hope that the Independent National Electoral Commission, INEC, would provide a level playing ground for all political parties and candidates.

The chief shepherd of the Catholic Diocese of Awka called on the people to vote according to their conscience and for candidates they knew that would address the situation of the country.

Bishop Ezeokafor warned Nigerians against vote trading while calling on those who would be elected during the elections to ensure that they studied the needs and challenges facing the nation and bring lasting solutions to them.