The Chief Shepherd of the Catholic Diocese of Awka, Most Rev Paulinus Ezeokafor, has confirmed over 170 deserving faithful in faith.

Bishop Ezeokafor administered the Sacrament of Confirmation on the faithful on Sunday, August 21, at St. Michael’s Parish, Akwaeze, during the parish’s Patron Feast Day.

Speaking at the visit, Bishop Ezeokafor emphasized the importance of pastoral visits, noting that they assisted in spiritual growth and gave the diocesan bishop first hand overview of happenings in the parish.

He stated that the newly confirmed faithful solidified the faith of the older ones as they represented the generation of people that would keep propagating the Catholic faith in line with God’s injunction that the kingdom of Satan could never close it. He charged the newly confirmed to continually uphold and defend the faith.

He reminded the people of Akwaeze Community that the creation of a new parish from an existing one was not to breed division in the town but for the growth of the faith. He thanked God that the misconception that arose with the creation of St. Gregory had been settled and appreciated the two parish priests in the community. 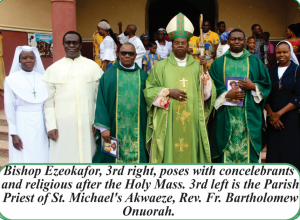 Drawing from the gospel reading, the Catholic prelate noted that priests, as pastors of souls, were expected to help the people of God in their respective communities to attain salvation, which, he said, would be actualized by people who hungered and desired it.

He disclosed the importance of maintenance and stressed the need for effective child upbringing.

Speaking to Fides, the Parish Priest, Rev. Fr. Bartholomew Onuorah, appreciated God for making the visit a reality and expressed optimism that the visit would help the people get familiar with their Bishop. He said that the 170 confirmed candidates had been configured as soldiers of Christ and would help the growth of Catholic faith. 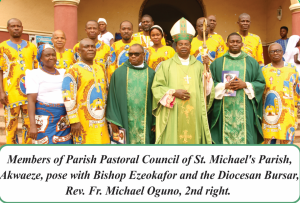 Fr. Onuorah underscored the importance of the parish feast and described St. Michael as a powerful saint and an intercessor who fought and defended the parish against all hidden dangers.

Contributing, a former chairman of Dedication and Jubilee Committee, Ide Clement Onuegbu Onyebuchi, said that the pastoral visit birthed peace, growth and progress in the community.

One of the sponsors of the confirmed candidates, Lady Ijeabalum Obi, expressed readiness to mentor the newly confirmed faithful to prevent them from deviating from the faith.

Presentation of gifts and band display formed the high points of the celebration. 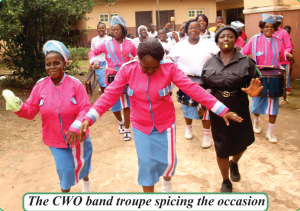