The Catholic Bishop of Awka Diocese, His Lordship Bishop Paulinus Ezeokafor, has erected a new Convent for religious sisters of the Congregation of Daughters of Divine Love at Regina Caeli Hospital, Awka. He officially opened the Convent on 20th December, 2021.

According to the prelate, the religious sisters of Daughters of Divine Love had their Convent within the hospital but it was engulfed by fire in the thick of COVID-19. He added that the Convent was built away from the hospital buildings to provide them some privacy, as well as a sense of belonging. He also expressed joy over the opening of the home, describing it as a promise fulfilled. 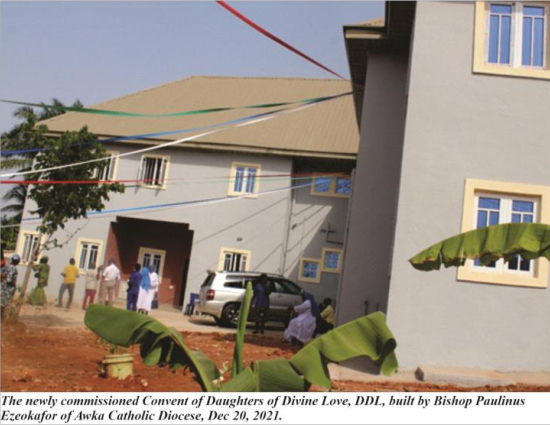 The Mother General of Daughters of Divine Love, Rev. Mother Mary Anastasia Dike, in her vote of thanks, appreciated the Bishop whom she said had been nothing but a bundle of love and care for the congregation. She said their mission as DDL sisters was to bring and share love to the world.

For her part, Rev. Mother Dike said that their apostolate was all embracing which included hospital apostolate, education, catechesis, charity homes and organisations, Catholic hospitality centres and anywhere love was required.