The Bishop of the Catholic Diocese of Awka, Most Rev. Dr Paulinus Ezeokafor, Saturday, November 20, made a pastoral visit to St. John of God Secondary School, Awka in Awka South Local Government Area of Anambra State.

The Bishop, whose visit came three years after he last visited the school, featured many activities among which were the blessing of an ultra-modern hostel built by the school; unveiling and blessing of the patron saint of the school’s statue – St. John of God; and the strengthening in faith of 120 students with the Sacrament of Confirmation. 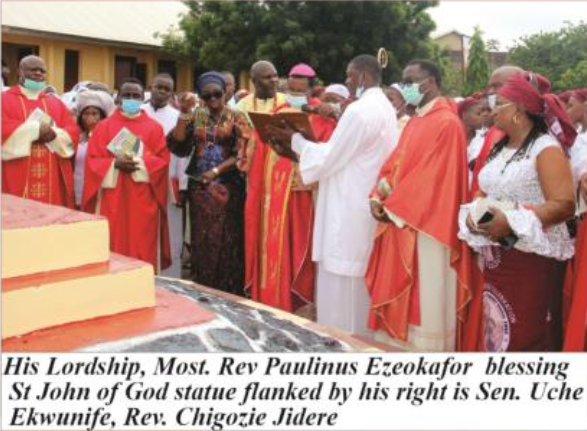 Beginning the pastoral visit with an Episcopal Mass, his Lordship, through his homily, emphasized the need for education and formation of young people, which, he said, was very important to growth. The prelate, who linked his teachings to the gospel reading, said Christ was able to read because he was educated according to the Jewish tradition.

His words, ‘The gospel of today gives us a clear idea of what we are in for. As He went into the temple, they gave him a book and he read. He read because he was educated according to the Jewish tradition. So, we are in an institution where people are formed in academics, spirituality and all other facets of life.’

The bishop who also saw a need for healthy competition among schools and students, appealed to students to take their studies seriously, even as he charged teachers to give their best to the students and prepare well before teaching them.

The prelate also thanked the Management of the school for the visible change the school was getting on infrastructure, especially in the building of an ultra-modern hostel which he saw as a necessity that would increase the number of boarding students and also the asphalting of the entrance road.

Aftermath of the Mass was the blessing of the ultra-modern hostel and statue of St. John of God and a warm reception for the Bishop that was witnessed by dignitaries, among whom was the senator representing Anambra Central, Mrs Uche Ekwunife.

For his part, the Manager of the College, Rev. Fr. Chigozie Jidere, in his address of welcome, thanked the bishop and other clergy for coming and also explained the purpose for the pastoral visit.

The Manager who also mentioned some of the academic and structural achievements the school had made and appealed to guests and dignitaries for their continual support for their developmental projects.

In an exclusive interview with Fides, the manager noted that all of the projects blessed were self-funded.

His words, ‘The projects blessed today were all sponsored by the school. We are not so used to getting external help from government these days unlike what we used to have in the past. All these were contributions we were able to save from parents and school and developmental fees of the students,’ he said.

The priest also thanked those who donated on the occasion for the growth of the College, particularly Sen. Uche Ekwunife, and other good spirited individuals who supported the occasion.