Following their commitment and intention to ensure smooth and effective administration of sacred Heart Chaplaincy, the Catholic Women Organization of the Chaplaincy has executed through the assistance of all and sundry the construction of the rectory project. 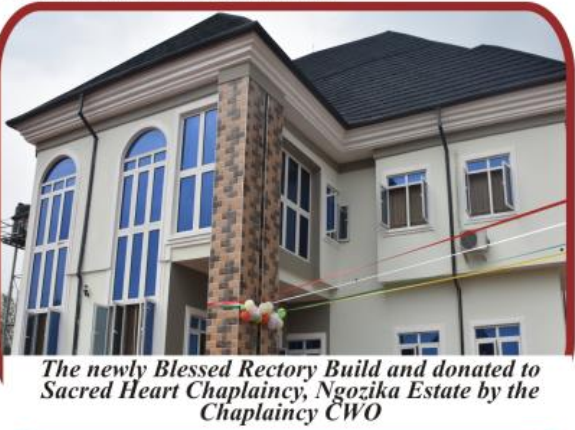 The rectory which was the pet-project of the CWO was blessed and commissioned for use by the Catholic Bishop of Awka Diocese, Most Rev. Paulinus Ezeokafor on Sunday, July 25th, during his second pastoral visit and administration of the Sacrament of confirmation on some deserving faithful.

Speaking on what necessitated the CWO’s to embark on the giant project while handing over the keys, the CWO President of the Chaplaincy, Mrs. Amaka Obiano, said they took up the project through the inspiration of the Holy Spirit. She revealed that the CWOs had nothing when they made the decision to commence the project, noting that God’s miracle of provision saw them through which made it possible for the project to be completed within two years it was begun.

She disclosed that finance was a major challenge encountered by the mothers during the execution of the project and thanked the various individuals that came up to support the project. She noted that without the support received, the completion of the project wouldn’t have been possible. 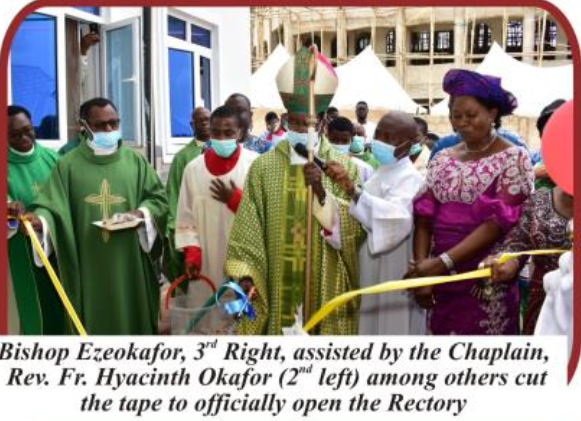 Receiving the keys of the Rectory from the Women, Bishop Ezeokafor commended the efforts of the mothers for effecting positive change that would bring about a new normal in the administration of the chaplaincy.

He maintained that the rectory would provide a conducive accommodation for priests working in the chaplaincy and those that would be posted for pastoral duties in years to come, adding that it would aid optimal performance.

Earlier in his homily, Bishop Ezeokafor emphasized the need for people to invest in ventures that would ensure human oriented development. He explained that the human body was made up of body and soul, noting that it was important that we take care of the two parts. He maintained that the way we feed becomes pronounced in our body system and urged the faithful to do so to their soul.

‘As we feed the body, we should also be conscious of feeding the soul as it helps us in building a better relationship with God. Communing with our fellow Christians is also important as it is in line with the injunction of Christ, he explained.’ 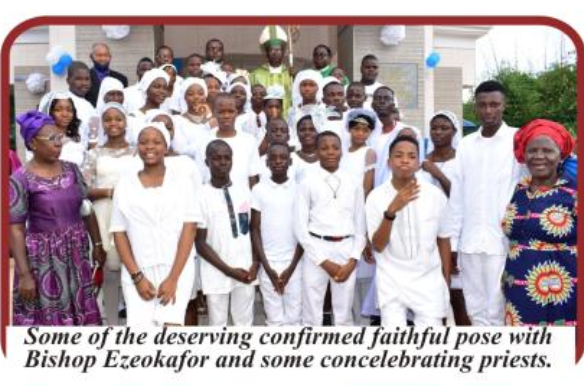 On the pastoral visit, Bishop Ezeokafor stressed that the visit offered first-hand information of happenings in the parish, noting that the physical and spiritual growth was quite commendable .He appreciated the individuals that donated towards the development and thanked God for making it possible.

He beckoned on the Christians not to lose hope in the happenings in Nigeria but to persevere in prayers saying that prayers work wonders.

Speaking to Fides on the second Pastoral Visit of the Bishop, the Parish Priest, Rev. Fr Hyacinth Okafor, revealed that some of the achievement recorded in the chaplaincy was through the diocesan bishop’s assistance especially in handing the requirements by the housing co-operation.

He commended members of the chaplaincy and stated that the structural developments that had been recorded depicted the sacrificial attitude of the members.

He explained that the awards which was given to some parishioners was to motivate and spur them up for greater responsibility, noting that those who supports the chaplaincy was excluded as their award would come up during the dedication of the church.

Confirmation of some deserving faithful, blessing of structures, presentation of awards, gifts, Choir rendition and dance displays were the highpoint of the celebration.