The Catholic bishop of Awka Diocese, His Lordship Most Rev. Paulinus Ezeokafor recently attended the Month of April Congress of the Nigeria Union of Journalists, NUJ, Anambra Council, with a call on the pen pushers to rally round Governor Chukwuma Soludo of Anambra State whom he described as determined to succeed.

Bishop Ezeokafor who made the call while addressing members of the Union at Mr Godwin Ezeemo International Press Centre thanked the newly elected executive for the progress made so far and charged journalists to support the Professor Soludo-led administration. 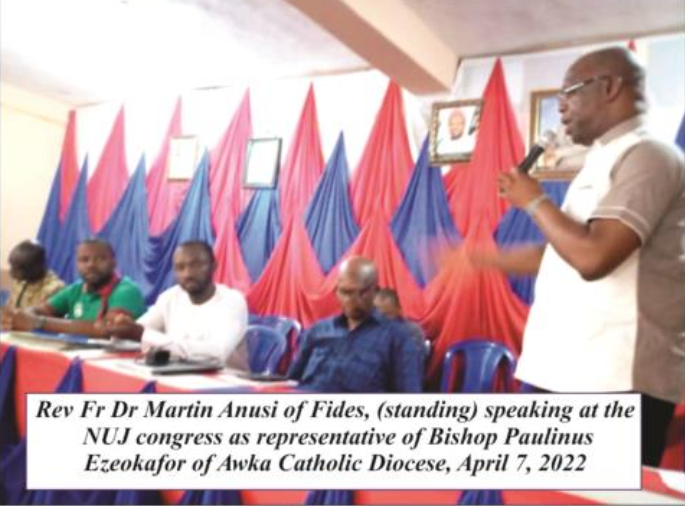 Earlier in his remarks, the Chairman, NUJ, Anambra State Council, Comrade Odogwu Emeka Odogwu, PhD, called on members to work for and promote the union in all possible manner with unity of purpose, which, he said, would keep the union formidable.

Dr. Odogwu expressed satisfaction with the turnout of members and stressed the need for members to work collectively to achieve the common goal of the union.

The congress which was well attended by members of different chapels of the union attracted the Catholic Bishop of Awka Diocese, Most Reverend Paulinus Ezeokafor, represented by the Director of Fides Media Rev Father Martin Anusi; political aspirants, among others.

The aspirants used the occasion to solicit support from the Nigeria Union of Journalists and reminded them of their aspirations in the forthcoming general elections, assuring of proper representation that would not only benefit their constituencies but also the state in general.

Fides reports that the congress featured presentation of reports from the NUJ 2022 Sub-committees on progress made so far.