Bianca, wife of former Biafra leader, Chukwuemeka Odumegwu Ojukwu, and Popular musician and socialite, Charles Oputa, a.k.a Charly Boy, have made the list of members of a committee on Truth, Justice and Peace set up by Governor Chukwuma Soludo, with human rights advocate, Prof Chidi Odinkalu, as chairman. 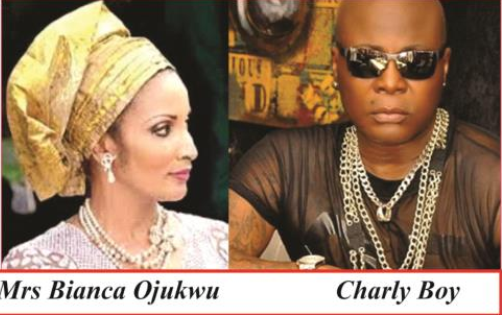 This was contained in a press statement signed by Prof. Solo Osita Chukwulobelu, Secretary to the State Government (SSG), last Tuesday.

The members of the Committee are:

Fides gathered that the purposes of the Committee on Truth, Justice, and Peace are to seek a restorative justice approach for truth-telling or real facts, for the healing of the victims of violence; accounting for responsibility and accountability of the actors; conditional mercy for the repentant perpetrators; restitution for certain losses and rehabilitation of the perpetrators for the overall aim of restoration of peace and justice; as well as the promotion of development in Anambra State, and the region/Nigeria.

‘Given the cross-border nature of the conflict, the focus goes beyond Anambra, and possibly covers the entire Southeast,’ the release stated.

The Committee, Fides gathered, will have a direct reporting line to the governor or his designee, and will be provided with administrative support. The Committee will also be free to draw up the methodology to accomplish its assignment.

The Committee will be inaugurated on a date to be communicated to its members.

The formation of this committee may not be unconnected with the spate of insecurity ravaging the Southeast Zone which had prompted Gov Soludo to announce amnesty to those willing to surrender their weapons.