Biafra: Beyond the Sit-at-Home

Last Monday, virtually all of Eastern Nigeria was shut down as the people honoured their brethren who laid down their lives during the civil war that others might live. From the streets and roads of Imo through Abia, Enugu, Ebonyi and Anambra states, emptiness greeted the few who ventured out to appraise the situation, especially newsmen. It was easily the most successful since the history of the sit-at-homes directed by Biafra agitators.

However, it is possible that the near total compliance might have been occasioned by the fear of violence by many people. It will be recalled that the Southeast states have suddenly been turned into war theatres, with the spilling of innocent blood, particularly those of security personnel, whose lives were extinguished by those who have come to be referred to as Unknown Gunmen. 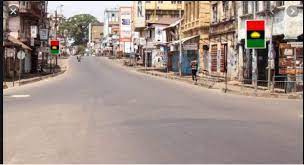 Biafra: Beyond the Sit-at-Home

Many police stations and facilities of the Independent National Electoral Commission, INEC, have also been destroyed or burnt by the gunmen; as well as facilities of correctional centres in the zone. Prisoners have also been freed by the attackers, thus heightening tension in the Southeast.

Coupled with the warning by the leader of the Indigenous People of Biafra, IPOB, Nnamdi Kanu, that those who flouted the sit-at-home directive would be dealt with, it was apparent that only those who placed no premium on their lives would venture out. The heavy presence of stern looking police teams on the road did not also help matters.

And so everybody stayed home.

As this year’s version of sit-at-home has come and gone, it may be necessary to take a critical look at the entire scenario with a view to finding ways through which such exercises would produce better results.

The first thing to note is that hardly anything done in the Southeast will affect Abuja or the presidency. This is simple because of the dearth of federal government projects in the zone. We must realize that the presidency under Muhammadu Buhari is past caring about what happens to most people in this country. This is why he can afford to travel when his country is burning. This means that we must devise another strategy which can make more impact.

It is good to map out a day for remembering our dead as was done last time but the truth remains that such directives for people to stay indoors will always run the risk of turning into violence if flouted by some people who may insist on going about their lawful duties. Such people are well within their rights to insist on such and there is nothing anyone can do about it as it is a free world.

However, we have observed that violence has often erupted when such people are encountered by Biafra activists and this is not good enough. When government declares public holidays people are not compelled to observe such, apart from government workers, who even while not going to work, are involved in other businesses.

It was a good thing that not much violence was heard of during the last sit-at-home. But the fact that many observed it out of fear, rather than out of conviction and commitment to the cause means that better ways of doing it will have to be found.

One of these ways, perhaps, is that we can graduate to holding public lectures on such days in which we invite national and international figures to reflect on our peculiar situation in Nigeria. This way, no one will be hurt and no one will have their business suffer.

Any destruction here is a destruction against ourselves. Any blood spilled here will likely be our blood. This is why care should be taken to check our slight to anarchy in these perilous times.

In 2015, the governor of Anambra State, Chief Willie Obiano, had honoured the Biafran dead in Awka in what was called ”Ozoemezina”. It was a bold and legitimate move to bid farewell to our fallen heroes. It was devoid of violence but still succeeded in raising public awareness to our collective experience in Nigeria.

Going further, we can organize public symposia to highlight issues affecting us as a people in this country without issuing threats. Let’s begin to engage relevant people and foreign missions to discuss our plight. We have the people to do that. It is much better than relying on the use of coercion to achieve any aim.

Sitting at home to prove a point is very good but, being in a free world, those wishing not to be part of it should not be harassed; lest we run the risk of inciting needless violence.

We have enough adversaries outside and we cannot be creating one inadvertently in these perilous times, all because we want to prove a point.

Enough is enough for the wise as they say.