Fake is the opposite of original. The opposite of good is bad. Original has to do with goodness while fake is synonymous with bad. Appearance is deceptive. When a man decides to marry, he must be extra vigilant because mad women will dress up like the sane. Many fake products are in the market today. Even some fake products are breathing and moving about on two legs.

Therefore we must be prayerful and shine our eyes well in order to distinguish between the good and the ugly, the sane and the insane. The wisdom endowed on humanity by God seems to be climaxing into dubiousness. The image of God in men and women are gradually turning into the image of the devil.

No wonder God regretted creating humanity shortly before the flood wiped out every living thing on earth except Noah and other pairs of animals in the Ark. I can’t imagine the gravity of God’s regret today as evil is multiplying grossly. If not for the superfluous mercy of God, the world would have come to an abrupt end.

God created man and woman and endowed them with distinctive organs and characteristics. Human beings, created in the image and likeness of God, are challenging the Creator by remaking themselves. Some men nowadays dress up as women by putting on fake breasts, ear rings and various feminine make-ups.

They put on various types of artificial long hair attachments, ranging from Brazilian hair, Italian hair, German hair, monkey hair, idiotic hair, etc. These are all obtainable in fashion markets. The fake women put on long finger and feet nails. They shave clean and use bleaching cream to lighten their skins. They also change their hoarse voices and adopt temporal feminine shrill voices. 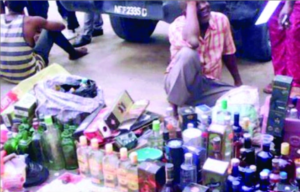 In the evening time they cluster around beer parlours and hotels to lure wayward men into lavishing them with drinks, food and money. In turn the fake women offer their customers hugs, kisses and romances. When it comes to going to bed, they excuse themselves for one reason or the other in order to avoid embarrassment and torture.

Few women likewise dress up and act like men. They adopt hoarse voices. They tie their breasts very tight. Some of them are not much gifted in this aspect. Lesbians wear fake private male organ. These fake men also put on artificial moustache and beards. They smoke and drink like callous men.

When there are gatherings or meetings of women, the fake women appear unnoticed among them. If there is anything to share, they get their own. Likewise, the fake men appear among men in their meetings, gatherings and social clubs. It is also possible that some women disguise themselves today as masquerades.

In the same way, the authorities concerned in the formation of women religious must shine their eyes to avoid accepting fake women into their convents. These fake women can even pretend to the end and succeed in making temporal or final vows as Reverend Sisters and Nuns. Therefore, I highly recommend physical body examination for any intending candidate for the Priesthood or Religious Life. The days are evil.

Not long ago, paid fake bishops and fake priests took part in the All Progressives Congress (APC) display of their Muslim-Muslim tickets to give it a religious backing that Christians and their clerics are solidly behind the same religion Presidential and Vice Presidential candidacy. It was the greatest deceit of the year 2022.

With the possibility of fake men and fake women in our society today, the existence of fake material products is enormous. How do we enumerate them? I am short of words and description. The high rate of mortality in our society today is as a result of fake products. Do we talk of fake rice? Miscreants use plastic materials to produce bags of fake rice and sell them in the markets.

They appear like original rice. Physically it is hard to distinguish between genuine and fake rice. To be on the safer side, put few grains of the rice you bought or received on burning fire. If they catch fire, they burn like plastic. Original rice cannot burn like that. Taste and see before you cook in order to avoid digestive mortal complications.

I am extra vigilant whenever I attend social or religious gatherings that have to do with food and drinks. Some of the food items are prepared with fake ingredients. There is even rubber meat, fake fish, fake oils, fake salt, fake vegetables, etc.

The conglomeration of these fake ingredients in the stomach causes irreparable harm and reduces life span. No wonder many die young today. Our forefathers lived longer because their diet was superlatively natural. Today we eat and die; drink and die. Various poisonous concoctions with preservatives are cocked into bottles as wine, malts, minerals and beer.

Even there is fake honey displayed in fine bottles for sale. The producers use any liquid and sweeten them. Somewhere a satanic man used human urine and sugar to produce what he labeled “Special Honey.” He was caught in the very act of urinating into bottles and then adding sweet flavours into each bottle. It has been observed that insects run away from such fake honey while we human beings delight in them.

No wonder we hardly hear of burial ceremony in the animal kingdom. In the human kingdom, scarcely a day passes without burial and funeral here and there. We are dying regrettably of fake man-made products due to man’s inordinate quest to get rich by all means.

We take drugs to enhance our health by self-medication and prescription by medical doctors. Self-medication is as dangerous as going to hell on foot. Fraudsters joke with human life. Fake drugs are abundant in the drug markets. The late Professor Dora Akunyili saved uncountable lives when she was the Director of NAFDAC by elimination of fake drugs in the markets.

By so doing she incurred the wrath of dubious marketers who wished her dead. They attempted to assassinate her but God intervened. Later she died a natural death. May her soul find a resting place among the triumphant Saints of God! Since her tenure, no one else has dared to fight boldly against fake drugs. This is the more reason why death rate is increasing geometrically. Shine your eyes! Beware of what you eat and drink. Death is displayed for sale in different dimensions.