Between Osodi and Primus: the Anambra North Senatorial Conundrum

The All Progressives Grand Alliance, APGA, has been in power in Anambra State for 16 years but it is yet to taste victory in the senate for Anambra North Senatorial Zone. Is it that their candidates have not been the best or that the people of the zone have been rejecting APGA? Perhaps, this is a poser only those from the zone can hazard a guess.

But as aspirants begin to warm up yet again for the various elective positions in the state, the matter of who becomes the senatorial candidate of APGA for the Anambra North ticket has never been more intriguing. Why? The battle this time is between two elephants: Chief Mrs Ebelechukwu Obiano, wife of the immediate past governor, Willie; and Chief Primus Odili, immediate past Chief of Staff in the government of Ebelechukwu’s husband.

In the twilight of the administration of Chief Willie Obiano as the governor of the state, he had announced that his wife would be contesting for the sole ticket of the party in the North Senatorial Zone, while he, Obiano, would be going to have his deserved rest abroad.

Ordinarily, when a governor who is the leader of his party in his state announces that his wife will contest an election, the feeling is that the ticket in question is already in the bag, given the enormous powers of governors in this clime. 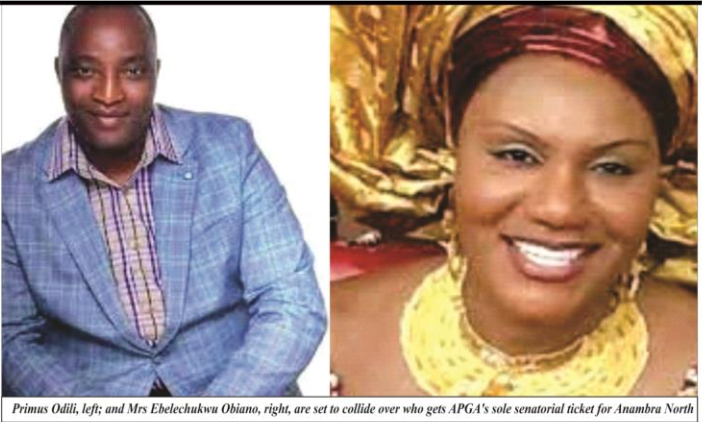 And that was what many must have thought at the time, despite the regime of Obiano already nearing its end then. Added to that, Osodieme, as the former governor’s wife was fondly called, wielded humongous powers in her husband’s regime to such an extent that she was feared more than her husband.

But then, the unexpected happened. The governor’s wife chose the biggest occasion of the year in Anambra so far (Gov Soludo’s swearing in) to do her senatorial ambition incalculable harm; at least as many people believe. Thus, what would have probably been a walkover suddenly began to look like a bridge too far.

This is no thanks to the slap she received from the wife of the eternal APGA leader, Ambassador Mrs Bianca Ojukwu, after both had an altercation. For those who have forgotten, Mrs Obiano had gotten up from her seat and walked up to Bianca where she sat and started querying why she should be there; an occasion that was not even her or her husband’s. A slap would however settle things and Mrs Obiano had to be escorted to where her husband sat, even as she continued to spit fire.

After this incident which sent the social media into raptures, not even her supporters thought she would muster the courage to continue with her senatorial ambition. But here we are, Osodieme is still very much in the race.

Last week, we read that she had apologized to both Bianca and Gov Soludo over her behavior and then proceeded to announce that she was still in the race. Did she apologize because of her ambition for the senate? Was her apology enough? Should she have equally apologized to her husband and to the people of the state? We shall return to this later.

Now, Osodieme is squaring up against a formidable opposition in the person of the Chief of Staff in her husband’s regime, Chief Primus Odili. I learnt from sources that Odili’s aspiration has been thrown up by the sudden unmarketability of Osodieme following the slapping incident which many APGA members in the North Senatorial Zone see as a big minus for the party and a development, they say, that has made Osodieme’s ambition dead on arrival.

But personally, I’m at my wits end as to how anyone thinks the former First Lady’s candidacy will sell. Even close to a month after the show of shame in Government House, Awka, I still find it hard to believe that what happened was true. It was indeed the stuff Nollywood is made of. But we all know what happened was as real as Soludo being the governor today. Thus, I’m pretty certain that APGA would be tempting fate if they ever allowed a certain character to fly its flag.

According to a source from that zone who pleaded anonymity, ‘We need another candidate to contest for senate in order to prevent our party from losing out again. Bringing out another person is not an insult to our former governor but rather to correct the harm done to him following the show of shame on the day of inauguration.

The person behind the shameful show owes the husband, Anambra North Senatorial Zone and the entire state, a huge apology.’

And talking about apologies, I really do think that Osodieme has more apologies to make, given her former position as the mirror image of all the women in Anambra State. In saner climes, anyone behind that show of shame should not be thinking of vying for any elective position any time soon. But, alas, we are in a society where things are quickly swept under the carpet. We will be watching the unfolding drama in Anambra North, no doubt.