A priest of the Catholic Diocese of Awka in Diaspora, Rev Fr Michael Joe Okpalanozie, has beckoned on well-meaning Nigerians to express love and cater for the welfare of the indigent through regular visits and giving of financial and other aids to orphanage homes.

He gave this charge on Saturday 18 September 2021, during his visit to Belonwu Memorial Community Children School, in Nimo, Njikoka L.G.A of Anambra State, Nigeria, to deliver gift items from a German benefactor, Mr Freidhelm Schweitzer. 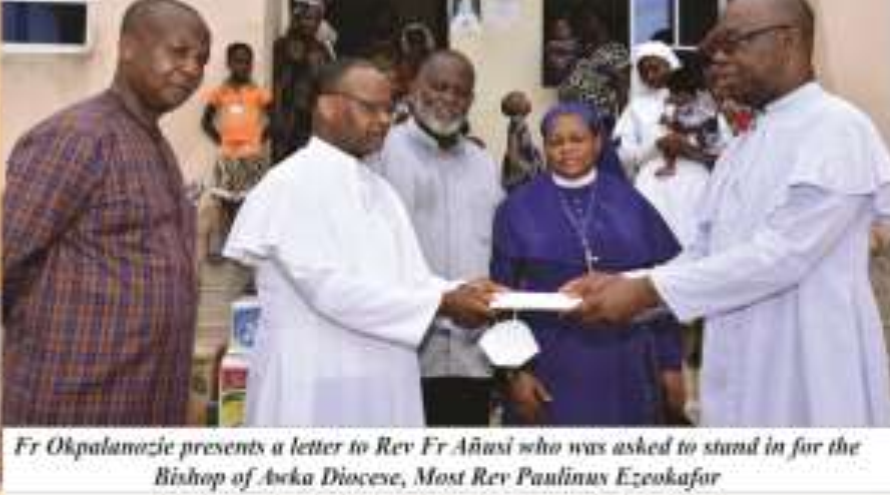 In his homily during the Holy Mass, the homilist, Charles Ibekwe talked about true service to God, noting that Christians should learn to serve God not Mammon, saying that many Christians, especially young people, were moving back to idol worship. He emphasized the need to uproot any ungodly trait that developed in one’s life as they were like weeds which grew in the lives of many people and could subdue them.

He commended the caregivers at the home for taking care of children that were not biologically connected to them, noting that it was not easy to take care of not only their physical needs but also their spiritual needs. He counselled them to continue living exemplary lives that the children would emulate. 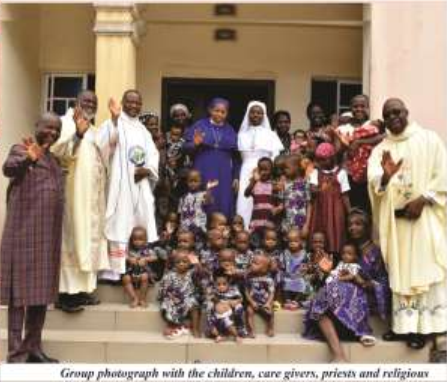 For the kids, he advised them to learn to center their lives around the teachings of the Church and their caregivers so that they would be fashioned to the glory of God.

Speaking to Fides in an interview, Rev Fr Michael Joe Okpalanozie, explained that he was sent annually, by a benefactor of the orphanage, Mr Freidhelm Schweitzer, a parishioner from Leinigen town in the parish of Vorderhunzuruk, Emmelshausen,  Germany, who caters for the welfare of so many indigent children in Nigeria and other countries.

‘Mr Freidhelm Schweitzer has no form of biological ties to these people, and he has never met them, but he chooses to be benevolent after I spoke to him about their indigent state’ he explained.

Fr Okpalanozie explained further that the benefactor was a personality who loved to help people not withstanding their origin, which was why he had sponsored two senior seminarians from the Catholic Diocese of Awka through him and had sponsored the maintenance of four children from the Belonwu orphanage for over three years now and had promised to continue. He revealed to Fides that another benefactor who came through him was Mr Joseph Schutz who helped to build an infirmary at St Joseph’s Hospital, Adazi-Nnukwu, amongst other projects. 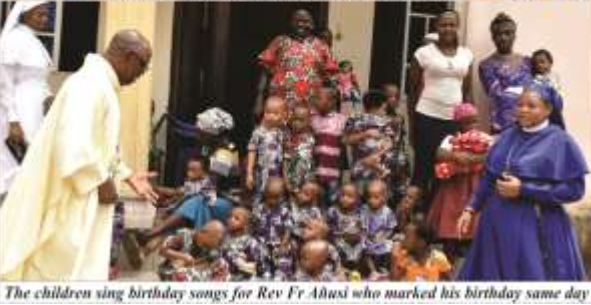 ‘The benefactor has been a source of help not only to the orphanage but had taken part in major projects in the catholic community in Anambra state’, he said.

He further said that he was sent again this time to bring items for the children’s upkeep and a cash gift for their welfare.

He noted that his brother, Barr.Tony Okpalanozie, who was present at the Mass, had asked if he could come on his own to the home to render some help and he affirmed. Fr Okpalanozie then charged well-meaning Nigerians to search out places where these indigent people were and show them love through their material and immaterial resources.

In an interview with Fides Media, the Matron of the Orphanage, Rev Sr Maris Peter Obizoba, DMMM, noted that the home was formerly an orphanage but was later changed by the Anambra State government to a community children school for abandoned, indigent, abused and less privileged children from the age of 1 to 3 years. She revealed also that most kids were brought to the home by security agents who found them abandoned on the roads, some of them were taken from abusive guardians or parents after strict investigation. ‘In this home, we accept not only motherless babies, but also a place for any indigent child’, Sr Maris Peter Obizoba, DMMM, revealed.

She thanked in a special way the benefactors and appreciated Rev Fr Okpalanozie for his kindness to his people at home.

Highlight of the visit was the presentation of food and other items to the home and a cash gift to the home through the Bishop. The cash gift was presented to Rev Fr Martin Añusi, who was asked by Fr Okpalanozie to hold brief for the Bishop. 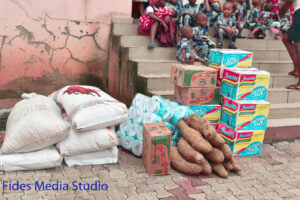 The kids also sang a birthday song for Fr Añusi who celebrated his birthday same day.