This is the final part of the touching but inspiring life story of a physically challenged legal luminary, Barr Chinenye Joy Okeke, who shunned what life has thrown at her, to conceive and achieve her dreams.

What are some of the challenges you have had as a physically challenged?

My mother cried when she called me on phone and heard of what I would face in Law school. I only assured her that I would cope. First was to go with a mobile toilet and bathtub. Good enough our female hostel in Law school was out of bound for men. So, I bathed outside daily. God always provided a means for survival, because even though there were rejections, there were people who so loved me and looked out for me.

From the hostel to breakfast and class, they were there for me. In Law school, we had what we called nannies; these were general nannies, but there was one amongst them, her name was Memuna. She took it upon herself to care for me. 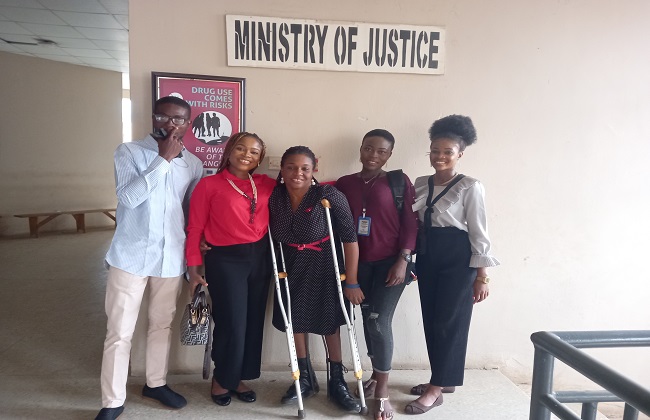 That was how I survived the one year at Law school. When I came here, they said Ministry of Justice was at the last floor. I was asked to report to the Attorney general, with the excitement of having secured a job, I did not know when I found myself at the last floor (laughs)

When I met her, she asked how I came up, I told her ‘’I came up ma’. She was wowed. She told me that after documentation she would post me out to somewhere I would not have to climb the staircase to get to my office. That was so kind of her, but I told her that physical challenges come with sedentary lifestyle, and I would not want a place where I would be inactive.

I said I want to stay here and that climbing the staircase would be the exercise for me. I would see people that are not challenged climbing and panting. But me, I will take my time, one step at a time to get to my office. On a lighter mood, I come earlier than so many people. I love to be happy, anything good that makes me happy is what I do. Do not look out for people that over think things. Some people pick little offense over little things.

People’s opinion should not always matter to you. What matters the most is the opinion you have of yourself. Anybody can come up with so many names about you, they will talk, because they can never stop talking. But know who you are, know what you want and love yourself.

Before I went out for job hunt in Plateau State, I dressed up, looked straight to the mirror, and then began to say good things about myself: you are beautiful, sexy, intelligent lawyer and nobody will reject you. That was how I carried on and then, within one month I secured a job. I worked there diligently and before I left there, everybody testified that it was the best chamber in Plateau State, then.

The Experience I had there made me to come very far in my career. I was never afraid of any case, and I didn’t allow my situation to pull me down. I advise everyone out there, to read, work on yourself and busy your mind. Do not bother too much about what people say about you. If people don’t want to be your friends, make them know they are not worth it.

When you focus your mind on the right things, people who think like you will catch up with you. But when you refuse to work on yourself, loafers will be the ones around you. When I realised, I could drive perfectly, I then knew I could do anything I wanted to do.

Do not be afraid to live or take blames; accept that you have made mistakes and then begin to work on them.

Why did you choose to study in the North?

My favourite sister was living with her family in Plateau State; my elder brother too. They wanted me to be close, so they could relieve my parents. After I wrote Jamb, I travelled to Jos, to join my siblings. My sister took care of me till I started practicing as a lawyer.

I thank God, because I was blessed with a lot of lovely siblings, who looked out of me. It was like a challenge thrown at them to take care of Chinenye, my family loved me, I know they loved me. Family is key, they never let me feel like I was alone in this. I was not looking for more, because even from secondary school, they will hail me for doing well in my class, that made me feel good and wanted to do more to impress them. I sat down and worked. As an aspirant of Law, you must learn how to sit down, work, research and think.

Why did you choose law as a career path?

From childhood, I always wanted to be in the limelight, speak good English, just like orators, presenters etc. So, I wanted applying for English Language. But my brother told me I could become more, he said he would want me to become a professional, so that I could be a model to physically challenged people. He said that as a physically challenged person, you must do things beyond the ordinary to drive a message to people out there.

When I graduated, I wanted to become a tutelage lawyer. First, it was difficult for any of them to pick me up. Number two was because I was a girl and a physically challenged one at that. They could not fathom how that would happen. No Lawyer wants to pay for nothing, they must get value for whatever they are paying for. So, they were sceptical about employing me. But they forgot that things are most times not how they look like.

They could not see the inner strength, they looked only at my fragile looking body. But the one person that accepted me, enjoyed my inner strength. It got to a point where he was so impressed with work and got me a car, which he never collected even when I left his chambers. I am not a flamboyant person and I believe in simplicity, but I love myself and believe in myself.

You have practiced Law for up to fifteen years now, what do you see as your greatest achievement?

My greatest achievement in practice was in Jos when I became a senior lawyer in the chamber I worked. Another one was when I did a court of appeal brief of argument. It was mind tasking, but I did it. When it was about to be filed, the principal in chambers brought it out and called all the Lawyers and told them it was one of the most brilliant briefs of argument any young Lawyer had ever presented.

I was then tagged at the chamber as the professor. Even in court, Judges recognize me and would always tell me that one day I would be a judge like them. I didn’t have any personal affiliation with them but observing me being a physically challenged, diligent in my duties gave me more advantage of time and hearing. I have not started going to court here in Anambra, because of mobility but now that I have a new car, my attorney can kill me with work.

Was there any case you encountered that shook your stands?

Yes, one family land case, though it was in Magistrate court. The animosity in the family was too much. My principal told me to handle the case. On the day of the hearing, when the prosecutionary lawyer finished calling his witness, I told the Judge that I wanted to do a no case submission for my client and the Judge obliged. I went home and prepared for the no case submission.

After that, I went and argued it in court. Unfortunately, I met a very senior lawyer who wanted to suppress me because he was a senior member of the Bar. He tried all he could to intimidate me, each time I wanted presenting my case, he shut me down. It went on and the Judge kept obliging him. It got to a point, I screamed out and said, my lord, my learned colleague cannot shut me up, I cannot be swallowed because, I have right of audience. I told the Judge that if I was not given audience, I will scream.

What it means in law is that I will make trouble after the case. A Judge usually will not want to be accused of being bias. Incidentally she was a woman, I told the court that, my learned colleague has been shutting me up and he was obliged. The Judge then warned the senior lawyer to allow me to talk.

It was then, I started making my submission. After the heated argument, we picked a date for ruling. Before the result was heard, so many clients came to me to handle their case which another lawyer could not handle for years. Months after, a ruling was given in my favour.

Another of such victories was a case my principal gave me to handle singlehandedly, because an emergency came up. I went home, researched, read, and prepared. My Boss kept calling to know how I was going about it, and at appoint, he said I was good to go. I appeared in court and after all arguments, the Judge told me I had done very well. And from that day she became my friend. And when I was leaving Plateau State, many Judges called me and prayed for me.

Your word of advice to people passing through same challenges as you are.

I want to encourage them to know that life is very ephemeral. In all you are doing, know God truly. Fall in love with yourself, if you don’t do that, nobody will. Do not wait for anybody to approve you. Work hard and then rest. Find time to unwind with people with like minds.