Before We All Perish

At a time, the Catholic Church in Nigeria used to say a prayer at every Sunday Mass, titled, ”Ekpere Maka Nigeria No Na Nsogbu’’, or Prayer for Nigeria in Distress. The prayer was prescribed at that time to plead for God’s mercy on Nigeria and salvage her from imminent doom.

At no time is that prayer so much needed as now. It is now a daily experience to wake up and hear or read about one horrific incident or the other – all to do with bloodletting. Nigeria has been so much soaked in blood that death has ceased to shock many and all of this is no thanks to our President, Muhammadu Buhari, under whose watch the country has sunk to her lowest.

The stories of Boko Haram, killer herdsmen and now, unknown gunmen, have all become ordinary news in this country; all because of the poor handling of these cases by Buhari, easily the worst president Nigeria ever had.

Here is a man who seems aloof to the fire raging in his country; fire he even ignited. It does not concern him how many people are wasted on any given day. Before now he seemed to react once it was herdsmen that were killed but now, nothing moves him as he plods on as though he were a robot.

Now the country is up in flames. What we initially thought would only be happening in the north is now happening here, no thanks to the unknown gunmen phenomenon.

The bombs falling in the north are about to begin falling here. Some people are hailing and clapping without knowing that bombs and bullets do not distinguish between friend and foe. The two school children killed by stray bullets in Ogbunike the other day were not the original targets; yet they stopped the bullets and perished. They would still be alive today if our zone had remained as peaceful as it was. 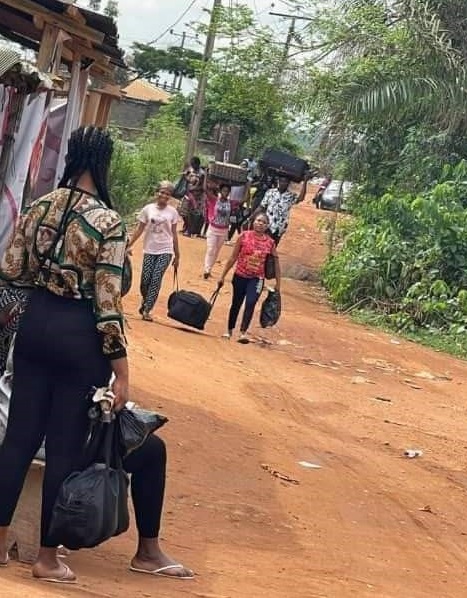 Students of COOU, Igbariam Campus, fleeing from school moments after learning about the killing of Fulani people near their school last Monday. They were afraid of a reprisal attack.

Today the police and other security agents have become like scarce commodities on the roads. Their absence is emboldening hoodlums to operate daringly. This can only lead to an anarchic society where power is in the hands of the ignorant.

Only last Monday morning, news filtered in about the gruesome killing of men, women and children of Fulani stock in Igbariam, Anambra East Local Government Area, by unknown hoodlums.

Their house which is around the Igbariam Campus of Chukwuemeka Odumegwu Ojukwu University, COOU, was raided in the early hours of that Monday morning and the residents were slaughtered, with some having their heads cut off along with their private parts.

The incident triggered panic among the student population and virtually every student fled for fear of a reprisal attack. I’m sure that even many of the residents of the area must have also fled. They know that in the event of a reprisal attack, no police protection will be forthcoming. Indeed if police protection hardly came in other places during attacks, is it now that hoodlums have sacked the police from the roads that they will come?

Responding to the development, the Anambra State Government rightly slammed a 7pm to 6am curfew on areas surrounding the place, including, Igbariam, Aguleri, Umueri, Nteje, Awkuzu and Umunya.

A press statement signed by the Secretary to the Anambra State Government, Professor Solo Chukwulobelu, said the curfew was with immediate effect.

The statement advised the people of the state living in those communities to obey the curfew order, as security personnel were on strict orders to enforce the curfew.

Yes, Nigeria has been brought to her knees by the failure of leadership. Yet, it is far better to manage that system than be in a systemless situation. In our failed system, there are channels through which one can seek and get justice, even if not at all times.

But in the system that is coming, those to decide our fate will be those who act on the spur of the moment, those who are fickle minded and can go after you for such simple reasons as your driving a better car or wearing better shoes. To them, you represent their oppressors.

When Boko Haram began, it was like this. The leaders and elders of the north probably saw them and their activities as not against their own people but against outsiders and non-believers. But it gradually snowballed into something those leaders and elders cannot stop today. They became monsters that had grown out of the control of those who made them.

Thus, from attacks on churches, mosques are being attacked today. Bombs are being thrown at will. Those being kidnapped are both believers and unbelievers and anarchy has been loosed upon the earth of the north.

Indications in the east today is that what panned out in the north in those early days are panning out here. People who feel aggrieved with the system are venting their anger and frustrations on others and the victims are their own people, rather than the ones oppressing them.

Any tyre burnt on our roads will shorten the lifespan of those roads and those roads are not in the north; they are right here in the east. The property we destroy are not in the north or west but right here among us. So what’s the use of such anger? If my enemy gets angry and burns his house in anger, rather than my house, how will it affect me? Won’t I throw a party and laugh at his apparent stupidity?

What is happening in the east now is like that. We are angry; yes, but we are channeling our anger against the wrong people. Buhari will happily leave us to our own devices than lift a finger to stop the carnage.  For all he cares, we can as well fight and kill ourselves till kingdom come. It doesn’t concern him one little bit.

The police officers being killed are mostly from here. They are brothers, husbands and fathers to people. They are breadwinners of their families. Many of them probably are as angry and fed up with the prevalent situation in the country as those who shoot at them. But then they have to eat and feed their families too. That is why they are remaining in the force.

It is easy to tell them to quit and join us in whatever outfit we have formed but that’s the kind of cheap talk we make when we ask those who have virtually lived all their lives in the north and invested there to come home and settle. Settling is not easy.

Are they coming here to settle when after buying a piece of land, they will be constantly harassed by area boys to settle them? Are they coming home when the processes in getting certificates of ownership are frustrating?

So, asking those working with the police or any other security arm of the country to resign and join a new one is much like asking the impossible. It just won’t happen easily, if at all.

No Nigerian today will be blamed for hating their country or agitating for a better deal. But it must be done reasonably, lest we destroy the very foundation we are standing on; even if shaky.

We must not all die in one day. A good soldier, it is said, retreats in order to live and fight another day. It is foolish for us to continue pressing the self-destruct button in the name of agitation. A soldier who points his gun at his own people can never be called a hero.

No matter the level of our anger, we must remain calm and level headed. Our own is our own. Attacking everybody around you will only create an anarchic situation that will let loose the criminal elements who will soon take over and overrun the state.

By the time the originators of the anarchy realize the danger and begin to call them back, it will be too late as they may even be targeted by the monsters they created and be termed saboteurs.

A state of anarchy does no one any good, except those who thrive in anarchic situations. It is certain that during the last Civil War in the country, as unpalatable and as harsh as the conditions were, there were still those who could have wished it to continue, solely because they benefitted from it. These people are always around in every conflict and are usually the first to fan the embers of war.

It is clear that such people also abound now and are possibly masquerading as members of the struggle for the liberation of Ndigbo. But they are the people that will hijack the situation and take it to where the original leaders couldn’t have planned or hoped to take it to.

This is why we should apply caution and common sense in all we do now in the name of agitation. Whatever the case, we should not fight ourselves as such breeds betrayals arising from distrust.

We should also still respect constituted authority and be ready to remove them if we think they are not doing well. But it must be through the ballot box rather than through the smoking barrels of the gun. Anything short of this is an invitation to anarchy which may consume both the leader and the angry led.