Be Alive To Your Responsibilities, Iloenyosi Urges LFC Chairmen

The Chairman of Anambra State Football Association, ANSFA, Chikelue Iloenyosi, has called on the Local Council Football Chairmen in Anambra State to be up and doing for the progress of football in the state.

Iloenyosi, who stated this while addressing the Chairmen of the Local Football Council from the council areas in his office in Awka, promised to assist them to change the narrative of local football organizers neglecting them while organizing football matches. He emphasized that local football councils must be respected and encouraged to do their job very well.

The FA boss informed the chairmen of his plans to bring in a lot sponsors to help in uplifting football at the grassroots level.

He advised them to make accountability their watchword as that would go a long way in encouraging sponsors to invest in the development of the game.

He assured them that he would be publishing the account details of the FA every six months to encourage transparency and accountability. 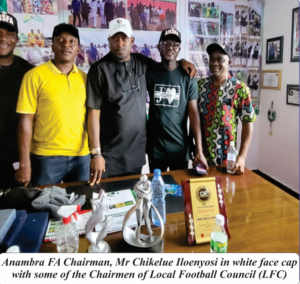 Iloenyonsi maintained that the issue of affiliation by clubs and organizers of football must follow the proper channel through the local football councils as the system in the past would not be tolerated.

Iloenyosi urged them to always make payments into the FA account and refrain from having financial transaction with any person on behalf of the FA.

Iloenyosi also disclosed that the FA had written a letter to the Ministry of Education with a view of reviving a lot of football competitions for schools.

Responding on behalf of other LFC Chairmen present, Hon. Engr. Okey Okeke of Dunukofia LFC, thanked the FA Chairman, Iloenyosi, for letting them know about what he described as the laudable programmes he had in mind and pledged their support to the FA led by him.