The member representing Nnewi North/South/Ekwusigo Federal Constituency, Hon Chris Azubugo; the Chairman of Awka North Peoples Assembly, Chief Shedrack Anakwue; the founder A and D Tabansi Foundation and the President General of Urum Community, Ambassador Aloysius Tabansi, have eulogized the chairman of the Nigeria Union Journalists, NUJ, Anambra State Council, Comrade Odogwu Emeka Odogwu, PhD, for what the trio described as the sterling performance of the chairman within a few months in office.

Speaking separately as guests at Godwin Ezeemo International Press Centre, Awka, during the monthly Congress of the Union, Hon Azubogu paid a glowing tribute to Odogwu, saying that the NUJ’s helmsman had been able to put in place many laudable programmes, including the mobilizing of over N5 million worth of gift items, ranging from clothing, shoes, bags, kitchen utensils and home appliances, for the less privileged and flood victims in IDP camps  through the NUJ Inter-Union and Outreach Committee headed by Dr Ebere Okonkwo.

Azubogu, a three-time House of Representatives member, while eulogizing Odogwu, intimated the Union members about his desire to represent the people of Anambra South Senatorial District in the National Assembly, noting that if elevated to the Senate he would automatically bring his wealth of experience to bear, adding that he had acquired the needed skills and technical know-how that would propel him to do better in the Upper Chamber.

Fielding questions from newsmen, he said his sojourn to the Green Chambers had placed him above every other contestant and that the experience he garnered so far in the lower chamber would be of immense benefits to the people of Anambra South Senatorial Zone, adding that he represented well and deserved to be promoted to the next level. 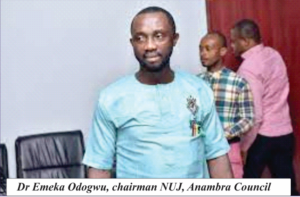 The lawmaker blamed the current inflation, insecurity, hunger and starvation, unemployment, and lack of basic amenities bedeviling the country to failure of leadership, even as he urged the poor masses to unite and take back their country from their oppressors and those he said bequeathed maladministration and hardship on them.

On the deplorable condition of the Enugu Onitsha Expressway, the legislator accused the past administration in the state of diverting the money kept for the reconstruction of Amawbia/Amansea end of the Federal road, emphasizing that the money was used in constructing the bridges at Amawbia/Kwata and Arroma Junction.

On having Senator Ifeanyi Ubah , Chief Chris Uba as fellow contenders, Azubogu, who is the All Progressives Grand Alliance, APGA, candidate for Anambra South Senatorial District, said that the duo posed no threat to his ambition, saying the introduction of BVAS had made the work easier for him, adding that the electorate would decide on election day.

Addressing the Congress, the Chairman of Awka North Peoples Assembly, Chief Shedrack Anakwue, thanked the Union leadership led by Comrade Odogwu for the opportunity given to them to appear before the Congress and also for the partnership which he said gave rise to the awarding of scholarship to over one hundred indigent students from the ten communities in Awka North, as well as for bringing to the public the plights of the people of Awka North, especially on the need for the government to provide access roads and also give the local government their due recognition and benefits as part of Awka Capital Territory.

Corroborating the chairman of Awka North Peoples Assembly, the founder of A&D Tabansi Foundation and the President General of Urum Community, Amb. Aloysius Tabansi, enjoined the Union members to keep promoting the council area, acknowledging that Journalists’ contribution in development of society could not be overemphasized, assuring that the partnership with the Union would be a lasting and fruitful one.

In their separate speeches, the first female Professor of Mass Communication in Sub-Saharan Africa and the Matriarch of the Union in the State, Prof Chinyere Stella Okunna, and the chairman of NUJ Inter-Union and Outreach Committee, Dr Ebere Okonkwo, appreciated Dr Odogwu for what they described as his laudable initiatives and also the members NUJ, Anambra State Council, for their generosity and kind disposition.

Prof Okunna said further that she was impressed by the numerous activities going on in the Council, adding that the Council never had it so good in the recent past. She urged Odogwu and his team to ensure it was sustained for the growth and development of the union and society as the conscience of society.

The chairman of the committee said the gift items donated by the Union members would be distributed to three communities from each senatorial zone. Ugbenu in Awka North for Anambra Central; Agbudu in Orumba South for Anambra South, and Mmiata Anam in Anambra West for Anambra North.