Awka Traffic Pains Have Road Users Been Left to their Fate?

If the bad condition of roads in Awka capital city and environs is bad enough, the attendant traffic gridlock in virtually every major junction in the city has turned driving into one big nightmare, with road users spending excruciating hours on the roads before getting to their destinations.

Indeed, the difficulties which road users encounter daily while traversing the roads in Awka, the capital city of Anambra State, have never been this bad. 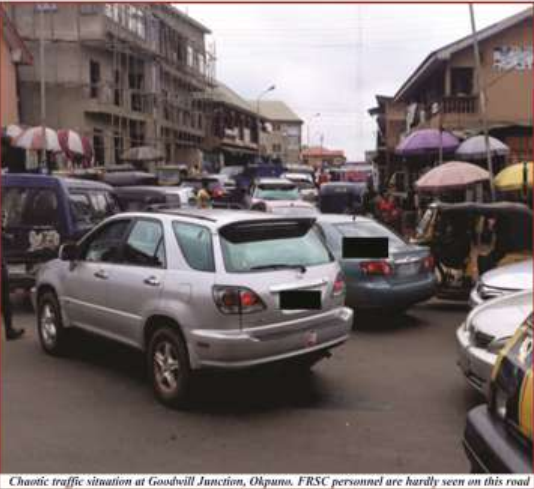 While Fides investigations revealed that the increasing traffic situation, which has become a new source of bother to people in the state, could be linked to the influx of people from different states in the country into Anambra, bad roads have also contributed in large measure to the situation as everyone now seems to squeeze themselves into the few roads that are manageable.

Yet, this situation could have been bearable if road traffic officials had been alive to their responsibilities. In times past, officials of the Federal Road Safety Corps used to be almost everywhere in the day time; sometimes even at night, directing traffic and ensuring that people did not spend long hours in traffic.

But since the advent of the unknown gunmen phenomenon, the presence of FRSC officials has seemingly reduced to the barest minimum. These days, no matter how long one stays in traffic, one can hardly see any sign of road safety officials.

Their virtual total absence has left the job of traffic control to officials of the Anambra State Traffic Management Agency, ASTMA. Lacking in the type of training and discipline of the FRSC personnel, ASTMA officials seem more concerned with making arbitrary arrests of traffic defaulters.

Last week, Mr Peter Onyejekwe was arrested for violation of the one-way rule. After extorting N2, 000 from him, he was asked to take one of the ASTMA officials to their office where he was made to further part with about N54, 000. With the eyes of ASTMA personnel focused on revenue generation, it is little wonder that they are not able to do a proper work. They are also not seen in the night when traffic gridlock is usually worse.

The traffic situation at these places is such that sometimes a road user moving from UNIZIK Temporary Site Junction to Goodwill Junction, Okpuno, in the morning hours and in the evening hours may spend over two hours in the traffic for a journey that ought to last for ten minutes.

Some road users who spoke to Fides on the situation last Wednesday attributed the traffic situation to bad roads, absence of traffic personnel on the roads and what they described as wrong use of the road by reckless drivers.

A Datsun truck owner, Mr Chinonso Ezeh, who spoke to Fides at Goodwill Junction, Okpuno, Awka South LGA, identified bad roads and absence of traffic personnel on the roads as the causes of the traffic gridlock in Awka.

He regretted that Awka, the capital of Anambra State that was once celebrated as a state with best roads, had lost its glory to that effect. Mr Ezeh added that the absence of officers of the Federal Road Safety Corps and other road traffic personnel had contributed to the traffic gridlock which people encountered on the roads on daily basis.

The truck owner, who recalled how he spent over six hours on the road from Club Road, Awka, to Nodu in Okpuno, decried the heavy pot holes, which, he said, had damaged virtually all the major roads in the state. He called on the Anambra State Government to urgently tackle what he described as the disturbing road menace in the state.

Also speaking to Fides at Y-Junction, Okpuno, a private motorist, who identified himself as Mr Onyebuchi, identified bad roads and reckless driving on the part of some motorists as some of the causes of the gridlock. Recalling how the pot holes along the UNIZIK Junction- Goodwill Junction, Aroma-Eke Awka and Regina-Goodwill Junction roads, and other bad roads in Awka, had destroyed the bumpers of many vehicles, Onyebuchi, called on the Anambra State Government to fix the bad roads in the state.

Another road user (who did not want his name in print), noted that most of the traffic situations were caused by reckless driving on the part of some motorists. According to him, many motorists, especially tricycle operators, often left their lanes and created up to four lanes on the road and by so doing caused heavy gridlock on the roads.

He called on officers of the FRSC and the Anambra State Traffic Management Agency, who, he said, had not been seen on their duty posts, to swing into action to control traffic situations in the state.

Again, the construction of the flyover at Aroma which does not allow trucks and articulated vehicles to access the flyover, has been identified as a major cause of the situation.

Speaking to Fides, a civil servant with the Federal Government of Nigeria, who resides at Ifite Awka, Mr. Emeka Okigbo, concurred with the above reason.

He noted that the influx of people into the state, which he described as a welcome development, had also exposed the residents to another social problem that could be associated with economic growth and its attendant traffic congestions.

He maintained that the congestion had been worsened by the inability of bus drivers to obey traffic wardens which the state government had stationed on the road to control traffic, noting that tipping of the traffic warders by motorists and loading of vehicles along the road by commercial drivers had compounded the traffic situation.

Okigbo also blamed the situation on the breakdown of vehicles around the road without immediate removal by towing vans and the non-presence of road safety marshals who had adequate training on vehicle evacuation and creation of alternative routes.

On the way forward, Okigbo called for the deployment of road safety officers on some roads which he described as problematic during rush hours, noting that people tended to obey the officers more.

He also called for the evacuation of tricycles, popularly known as Keke, which load along the Aroma Express and Ifite Road Junction; even as he called for palliative repairs to be carried out on the road linking Aroma Junction to Ifite Awka.

He said that road users found it extremely difficult to navigate there as a result of deep potholes, which, he said, had the capacity of pulling off car bumpers. He expressed optimism that proper management of the road by officers and effective marking of roads would assist to manage the traffic situation in Awka capital.

Contributing, an Inspector with the Anambra Traffic Management Agency, ASTMA, Canice Chizoba Ifedioramma, also agreed that there had been a great increase in the influx of people into the capital city and regretted that ASTMA road inspectors who had been stationed on the road to manage the traffic situation were mostly neglected and were often not obeyed when they issued directives to moving vehicles.

He said this development often discouraged the road marshals from carrying out their responsibilities of managing vehicular movement effectively, saying that total obedience must be observed from all road users to combat the traffic problem.

He suggested the creation of alternative routes, especially for vehicles to use the Ekwueme Square while turning towards the Amenyi side of the Aroma Junction.

A bus driver that plies Eke Awka-Ifite route, Mr. Chinedu Ileka, said that improper siting of the flyover at Aroma was the major cause of the massive gridlocks mostly experienced within the Aroma Junction.

Illeka who described the flyover as an ancient model, urged the government to re-fashion the flyover so that it would look like the one situated in Onitsha which was carried out by Gov Peter Obi’s Administration, noting that it would promote vehicular movement and reduce the massive gridlock within Aroma Junction in Awka.

Observation showed that the traffic at Kwata is usually because of disobedience to traffic lights and absence of traffic personnel sometimes, especially during rush hours. The one at Amawbia by express is caused first by the bad spot before the bridge, and secondly by the fact that every motorist prefers to go under the bridge and move to the constructed lane of the expressway, while going to Onitsha, in order to avoid the bad road on the Onitsha bound part of the express.

A motorist driving through the road, who simply identified himself as Mr Emeka, said, ‘If the company handling this road construction can quickly do the Onitsha bound part of the road from Awka, it will reduce traffic on this Amawbia flyover.

‘For now, every vehicle (owner) wants to travel through the already constructed part of the road, so, they go under the flyover; the same way intra-city vehicles are moving, and now join the other part of the road from under the bridge.

‘Even vehicles that ply over the bridge still turn at the end of the flyover, drive one-way to join the new road on the other side through the under bridge, and that is contributing to the traffic. There are also no traffic personnel here most times. Volunteers have to be the ones helping out, and you know that the volunteers must have also been trapped in the traffic and want their lane to move too so they can leave the spot early. It is a very sorry situation we found ourselves in Awka,’ he lamented.

When Fides sought the views of the FRSC on the situation, the spokesperson, Margaret Onabe, debunked the allegations that her people had abandoned the roads. She maintained that FRSC personnel were always at hot spots such as Kwata Junction, Amawbia and Aroma, including Agu Awka and Amansea.

But when reminded that they were not stationed permanently there as before, as well as not being there in late evenings when traffic got busier, she said she would look into it with a view to putting her people there. She urged Fides to alert her whenever and wherever the traffic got bad.

‘The Federal Road Safety Corps, FRSC, Anambra State Command, is addressing the issue of traffic jams across the major cities. Our officers and men have been on ground since last Thursday managing the traffic obstruction, and effort is being made to tow the fallen trailers and rickety vehicles from the road,’ she assured, while thanking the media for their continuous support to the FRSC.

When Fides also sought the views of the Anambra State Government on the bad condition of the roads which contributes to the traffic situation, the Commissioner for Information and Public Enlightenment, Mr C. Don Adinuba, while attributing the delay in fixing the roads to the rains, said the state government had already commenced work on the Amansea spot, even though it was a federal road.

He also said work would soon begin on the internal streets as soon as the rains ceased.