Awka Township Stadium may next weekend commence the hosting of the home matches of the famous Rangers International Football Club of Enugu to signal the confirmation of the stadium as among the country’s best, facility wise, reports Jude Atupulazi.

Investigations by Fides revealed that the Management of the legendary Southeast club had recently written to the Anambra State Sports Development Commission, asking permission to inspect the stadium facilities as a prelude for using the stadium as the venue of their home games, pending the completion of the rehabilitation of Nnamdi Azikiwe Stadium in Enugu.

The recourse to Awka Stadium, Fides learnt, followed the dissatisfaction of Rangers with the state of the pitch at Ifeanyi Ubah Stadium in Nnewi which the team had been using for their home games. The team complained that the pitch did not allow them to play their brand of football. 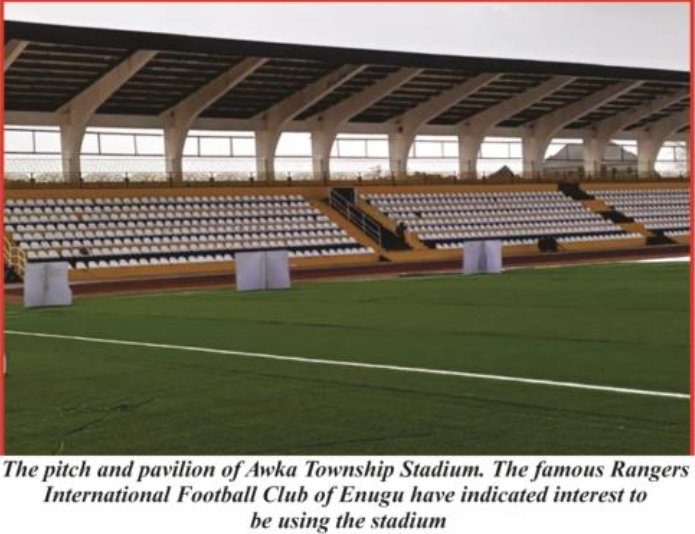 Reacting to this development, a Rangers icon and former Nigerian national team goalkeeper, Emmanuel Okala, described it as a good omen. In a telephone chat with Fides, Okala said, ‘It will be great. Our Governor said it on the day the stadium was commissioned that big football teams like Rangers would one day choose to play their matches in the stadium because it’s FIFA standard.

‘I will rate the governor and Chief Tony Oli very high on the building of this stadium. A lot has been achieved during their time,’ Okala enthused.

For Rev Fr Coach Obinna Dike, Chairman of Anambra State Independent Football League, AIFL, the opening of the Awka Township Stadium just after the first phase of three in its full construction is already yielding benefits by what he called value catalogue.

His words, ‘The request by elite Nigerian club side, Rangers FC of Enugu, to use the stadium for her home matches in the NPFL will bring more robust sports life to the Anambra capital for the first time in its history. Surely, both sports, entertainment and hospitality industry will receive a huge boost.

‘In addition, about four sets of European scouts are in line to use the stadium between March and April for the evaluation of players for foreign football leagues.

‘Again, the Anambra Independent Football League (AIFL) has also tendered her request to use the Awka Township Stadium as her official venue for her traditional Friday league games.’

Fr Dike disclosed that a good number of schools had also declared interest for excursion to the complex for educational purposes.

‘One can imagine the Traffic being already anticipated in the stadium as it is now. This definitely implies a great platform for sports business for Anambra. It’s kudos to the Anambra Government for initiating this. We hope the Soludo Government would take up the remaining stages of the facility,’ Fr Dike said.

Fides reports that in the period between when Governor Obiano appointed Chief Tony Oli as the chairman of Anambra Sports Development Commission, the state had finally witnessed an organized, systemic and accelerated development in the sports sector.

According to Chief Tony Oli, chairman of the Anambra State Sports Development Commission, this followed the declaration, by Obiano, of a state of emergency in the sports sector in 2017 and the subsequent setting up of an independent commission that would focus on Sports development in the state. 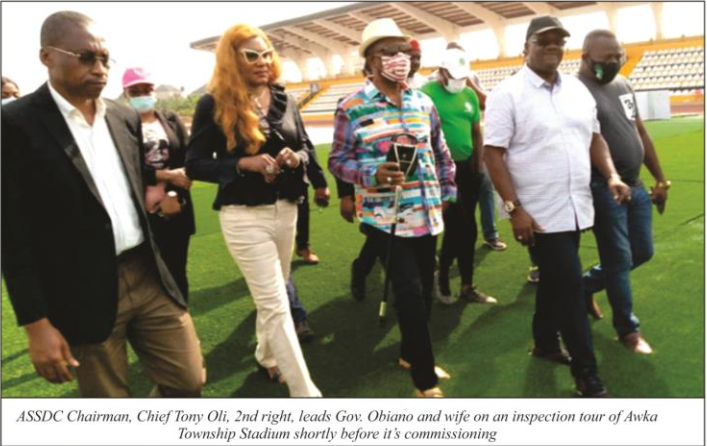 The Commission is currently domiciled under the office of the Governor to give it the needed impetus to function effectively.

1.Developing and implementing policies and activities that will support Sports Development in the State

2.Improving the welfare and physical health of young people, as well as promoting and popularizing sports

3.Facilitating the engagement of instructors, coaches, and role models for the development and management of talents, as well as their preparation for competitions and tournaments

4.Recommending levies and other charges to be paid by citizens and businesses and assisting in the collection of same working with relevant State IGR collection agents and organs

7.Overseeing the activities of all the sports associations in the state, grassroots sports development, as well as capacity building for sports administrators, sports officers, coaches and athletes.

The Commission, in pursuit of its mandate, has embarked on a number of activities such as Walk 4 Life to promote fitness; Academicals Football Competition for U13 and U17 kids, in primary and secondary schools, designed to discover and develop young talents; Communities Shield Competition designed for communities to engage each other in football competitions, Security Challenge Cup football tournament organized for all security agencies in the state to create a bond amongst men of the agencies for better performances in the fight against crime and criminality; Teri-Cup, a football competition organized for students in tertiary institutions in state, designed to build relationships among Universities.

Other innovations of the Commission include the Volleyball League; and Elite Talent Development.

Apart from attending those sporting events, the Commission has also hosted some and they include: Nigeria Police Games; South East Volleyball Championship.

Sports Infrastructure Development put in place within this period include: Provision of Sports Facilities in Ekwueme Square, Awka; Awka City Stadium. These, according to Oli, have contributed to the GDP of the state.

The Commission has also been embarking on continuous talent discovery with the help of former stars of the state like Emmanuel Okala and Mary Onyali-Omagbemi.

For these feats some sports stakeholders believe the incoming administration of Prof Chukwuma Soludo will do well by retaining the services of Oli long enough for the next man at the helm to get to grips with the situation.

One of them is the Anambra State chairman of Sports Writers Association of Nigeria, SWAN, Mr Tony Orji. He opined that retaining Oli for a few months would aid full transition, even as he believed the best bet would be to constitute the Sports Commission properly.

‘The commission is supposed to have three commissioners from the three senatorial zones for proper representation and administration of sporting activities. This is necessary because we have 179 communities, so it will help in fishing out talents so easily at the grassroots level and give room for quality competition in various sports, as well as sponsorships. We don’t need to narrow our target any longer. Other states like Delta, Rivers, Edo, Kaduna and Lagos, are taking better advantage of such spread and it has continued to yield results for them.’

As the new regime comes aboard, all eyes are on it to determine the direction it will take in the sports sector.