The LGA Boss made the statement at a victory party organized in APGA-Awka, Ward 4, by himself (Chief Nwuba) to celebrate Prof Sulodo’s victory at his residence in Ezi-Awka, Awka South Local Government Area of the State, November 20.

It will be recalled that the former Governor of the Central Bank of Nigeria, Prof Chukwuma Soludo, was declared the winner of the Anambra governorship election by the Independent National Electoral Commission, INEC.

Chief Nwuba extolled residents of Awka South for coming out in the first position in the just concluded Anambra 2021 election, describing the election as the most peaceful and transparent in the history of Anambra State, adding that Ndi Anambra voted a visionary and wonderful leader whose style of politics was sincere, inclusive and result-oriented. 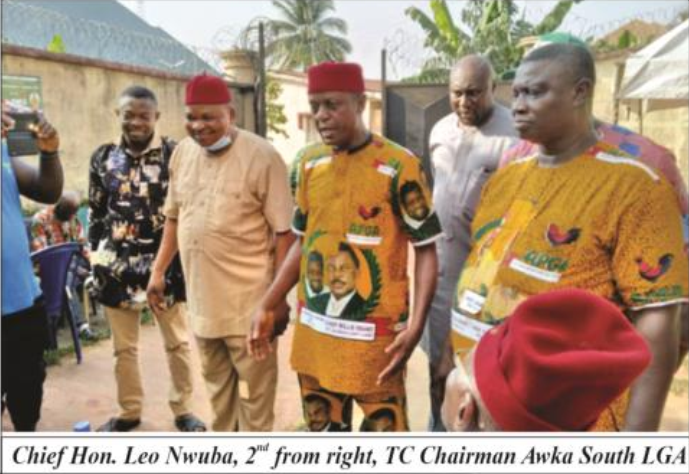 He lauded the current governor of the state, Chief Willie Obiano, for actualizing his vision for the state through what he tagged his gigantic legacy projects, stressing that what he further described as Obiano’s relentless efforts to reposition the state was fast yielding massive results.

‘I feel highly elated that indigenes of Anambra made the right choice in voting Prof Soludo and I am confident that Anambra will experience abundant human resources in the coming years.

‘I am most thankful to the great people of my ward and God almighty for this rare opportunity and privilege to have Soludo govern us. And I reiterate my commitment to remain a major supporter of Prof Soludo’ he concluded.

Soludo who was the nation’s apex bank’s governor between 2004 and 2009, won 19 of the 21 local government areas. The sixty one-year-old Soludo won with 112, 229 votes, beating Valentine Ozigbo of the People’s Democratic Party, who polled 53,807 votes, and Andy Uba of the All Progressives Congress who got 43,285 votes. Ifeanyi Ubah of the Young Progressive Party polled 21,261 votes to come fourth.

Soludo’s walk to victory was paved with stony challenges, including legal battles and intra-party squabbles, but the Supreme Court in Abuja affirmed him as APGA governorship candidate. This was after the sacking of a former APGA aspirant, Chukwuma Umeoji, by the court.