The Catholic Laity Council of Nigeria, Awka Diocese, has held an interactive session with the Catholic Bishop of the Diocese, Most Rev. Paulinus C. Ezeokafor. The session which held at Our Lady of Assumption Parish, Nimo, August 6, is an annual event which provides an opportunity for dialogue between the Bishop and the lay faithful of the Diocese, including laying complaints and suggesting ways of going forward in the Diocese. 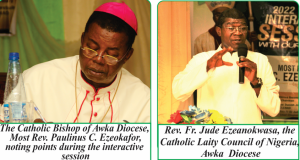 The Bishop explained that such

sessions were crucial as they helped to spotlight issues affecting the diocese. He added that they also allowed the laity to make contributions and suggestions on how best to tackle the named issues.

The topics discussed revolved around Church hierarchy, the Laity Council and its elections, Laity Week collections, modalities of Church bodies’ elections, organisational levies, clearance prior to weddings, cathechesis, mode for the receipt of communion, women in politics, neo-paganism, the sit-at-home situation, Nigerian politics, among others.

The Bishop described the Laity Council as an umbrella for all the Catholic laity and urged parish priests to properly back the Council to sustain its relevance. He called for a reorientation of parishes on the essence of the Council, even as

he also emphasized that representatives of the Council at the deanery or diocesan level should be present during the Council’s Elections in parishes. He noted that suggestions could be made by the members about their choice of chaplains.

On the issue of cathechesis, the Bishop pointed out its vital place in grooming the faith as it involved direct conversations and dialogues, and treated contemporary issues. He stressed that it should not be undermined in parishes and that the laity should also take active participation during cathechesis. 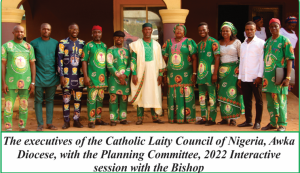 Going on, he strongly advocated for the inclusion of capable women in politics; just as he also said the Church allowed the receipt of communion on the palm due to COVID-19 restrictions, but that it could be given directly into the mouth in this part of the clime as well, based on individual preference.

Additionally, the Bishop decried the effects of the sit-at-home order, pointing out that it

required the efforts of several stakeholders and not a single body to revert the order. He reiterated his belief in one Nigeria, but not one obtained at all costs. He reminded everyone of the upcoming 2023 Presidential Election and urged all to be wise in the choice of the country’s leaders. 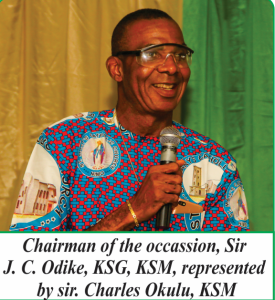 In an interview, the Public Relations Officer of the Catholic Laity Council of Nigeria, Awka Diocese, Hon. Onyekachukwu Ezika, KSM, disclosed that the interactive session was taking place for the first time in Nimo Region after the creation of the new Awka Diocese, and that the

next one would take place in Awka Region.

The Chairman, Planning Committee for the 2022 Interactive Session with the Bishop, Comrade Nwamini Obinna, expressed gratitude to the Bishop and to all who had contributed to the success of the event as well.

In his closing remarks, the Awka Diocesan Laity Council Chaplain, Rev Fr Barr Jude Ezeanokwasa, appreciated the Bishop for the initiative to host the session with the diocesan laity. He also acknowledged the presence of the laity bodies at the event.