The Catholic Bishop of Awka Diocese, Most Rev Paulinus Chukwuemeka Ezeokafor, last Sunday, March 14, flagged off the 2021 Annual Laity Week of the Catholic Laity Council of Nigeria, Awka Diocese (CLCNAD), with the theme Word of God: Dependable Light and Hope of Survival in Adversity. 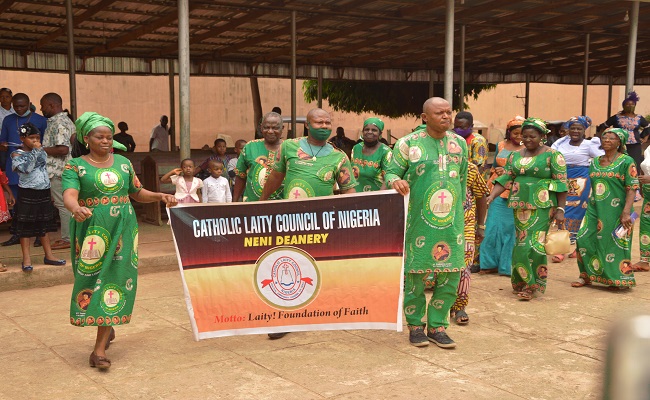 A section of the laity at the event

Bishop Ezeokafor, condemned the increased cases of kidnapping, insurgency, Fulani herdsmen attack banditry and other forms of insecurity menace in Nigeria, which according to him were threats to humanity.

He flayed bandits who had resorted to kidnapping priests and religious to desist from such lest they incurred the wrath of God, insisting that the Church does not engage in any form of negotiation with kidnappers and criminals.

The Catholic prelate, who further based his reflections on the readings of the Sunday, tasked all on love for one another and exemplary Christian life which had its foundation in Jesus Christ, the salvation of mankind.

According to him love was to wish the other person well and God is love. He enjoined all to live out life that portrayed the love which they had for God as well as worship him (God) in truth and spirit so as to reap the attendant reward.

In his address of welcome at the event which doubled with fund raising for the completion of the ongoing Laity Council Secretariat, the President, CLCNAD, Hon Joseph Igwebuike, said the theme of the Laity Week was properly chosen due to the need to address kidnapping, banditry, insurgency, rape and killing of human beings in Nigeria.

The president solicited for donation from all towards the completion of the CLCNAD Secretariat project which he said, when completed would also house an event hall that would be generating fund for the running of the Council.

He appreciated the Executive Governor of Anambra State, Dr Willie Obiano; his wife, Dr Mrs Ebelechukwu Obiano; the patrons and the ambassadors of CLCNAD as well as all who graced the event for their support to the Laity Council.

Speaking on the theme- Word of God: Dependable Light and Hope of Survival in Adversity, the guest speaker, Arc Calistus Ilozumba, KSM, KSS, described Christ as the prime word of God and the dependable light.

The guest speaker kicked against what he identified as the wrong normal which policy makers called the ‘new normal’. He advised the laity as well as the entire masses against allowing their minds to be suppressed by the ills of society. Ilozumba urged all to speak out against evils so as to be free from adversity.

Arc Ilozumba, who is a former Anambra State Commissioner of Works and a former president of the Catholic Laity Council of Nigeria at the diocesan, provincial and national levels, observed that the contemporary situation in the world and Nigeria, complicated by COVID-19, defined adversity.

Pointing out that people encountered adversities, hardship and discomfort in their daily lives in their families, communities, church and society, the guest speaker encouraged Christians to live up to their mission of preaching the gospel, feeding the poor and healing the sick.

He gave an illustration of how the pioneer parish priest of his home parish, Holy Trinity Parish, Obeledu, had with the word of God taught the people how adversity could be reduced by engaging the parishioners in spiritual activities and hard work which included earning a living through farming.

The former commissioner identified being pragmatic, resourceful, creative, humble; positive use of ones charisma and thinking out of the box as some of the ways through which one could possibly aid the spread of the word of God

In his remarks, the Chief Whip of Anambra State House of Assembly, Hon Lawrence Ezeudu, who was the chairman of the occasion, observed that the menace of encouraging evil emanated from the family where the children lacked the courage to speak against ill doings by their parents and the parents failed to correct their children when they erred.

Pointing out that courage was necessary to fight adversity, Hon Ezeudu charged the masses to put their political office holders on their toes, call them to order when they seemed to be lacking in the duties and speak out against irrespective of who was involved.

Speaking to the press, the Chairman, Organising Committee for the 2021 Laity Week of CLCNAD, Mr Chidiebere Nwafor, revealed with the flag off, the Laity Council would within the one week that followed, organize the Laity Week in their various parishes across the diocese. According to Mr Nwafor, the committee would monitor in the parishes, the program which would include talks, discussions, prayers and monetary collection for charity activities.

The event which had many laity from the thirteen deaneries that make up the Catholic Diocese of Awka in attendance, featured inter-deanery march past, discussion on the them and donations in support of the Laity Council project.

Among others that graced and supported the event were the Wife of the Executive Governor of Anambra State, Dr Mrs Ebelechukwu Obiano, who was represented by Special Adviser to the governor on Media, Hon Ify Obinabo; an APC Anambra State governorship aspirant, High Chief JohnBosco Onunkwo, who is one of the ambassadors of CLCNAD; Chairman, College of Patrons, CLCNAD, Professor Josephat Ogbuagu, mni and grand patron, CLCNAD, Prof Pita Ejiofor.