The Catholic Diocese of Awka last Sunday, November 21, joined her counterparts throughout Nigeria in the celebration of the 2021 Solemnity of Christ the King, otherwise known as Ofala Kristi.

Fides reports that the diocese directed that the 2021 event be celebrated at parish levels as against the Catholic Community level which the celebration was previously held.

The Catholic Bishop of Awka Diocese, Most Rev Paulinus Ezeokafor, led the faithful of St Patrick’s Cathedral, Awka, in a Eucharistic procession, as they proclaimed Jesus Christ the universal king, through the streets of Awka. 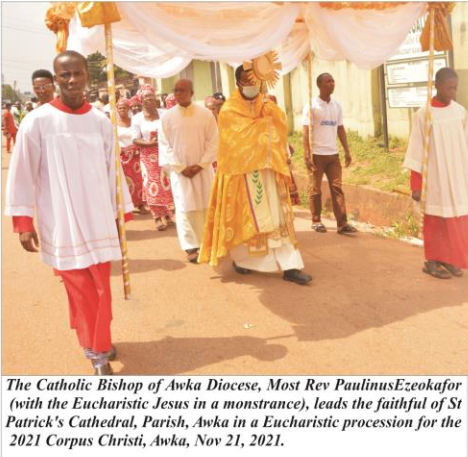 Vehicular and human movement were kept at a halt in the Eucharistic procession that took off from Igwebuike Grammar School, Awka with songs and dancing, and was concluded at St Patrick’s Cathedral, Awka, with a benediction.

Speaking at St Patrick’s Cathedral Podium during the ofala celebration, Bishop Ezeokafor tasked all on a life of peace, obedience and love, which, he said, were expected of those who shared in the kingship of Jesus Christ, the just and peaceful king.

Earlier during the concelebrated Holy Mass led by Bishop Ezeokafor to mark the solemnity at St Patrick’s Cathedral, Awka, the Cathedral Administrator II of the Cathedral, Rev Fr Paschal Udo, in his homily, described Jesus Christ as the King who came and identified with his people to equally make them Kings.

He encouraged all to give Christ the opportunity to reign as King in their lives and society. According to him, those who accepted Jesus Christ as the true King and the true shepherd would never lack in life.

The homilist charged all to bear witness to truth, remain faithful to God and hold on to Christ, the saviour, Lord and King, who, he said, came for the good of all. The above expectation, according to FrUdo, were the expectations of Jesus, the king from Christians.

Pointing out that all people were Kings in their various offices, places of work and businesses, FrUdo, who is also the Chaplain of CYON, Awka Diocese, stressed the need for people to treat their subjects with mercy and kindness, and by so doing, live out works of mercy as stated in the Gospel of Matthew, Chapter 28.

He noted that it was only when the people of God lived out the works of mercy; helped the needy and comforted the depressed, among others, that they would build the kingdom of God on earth.

Regretting that society was in disarray, the Catholic priest charged Christians to take up their responsibilities, bear true witness to Christ, surmount challenges and renew the face of the earth.