…As Bishop Rhoades Charges Priests to Seek the Lost Sheep

The Bishop of the Diocese of Fort Wayne-South Bend, Indiana, Most Rev. Kevin Carl Rhoades, who took charge of the ordination, charged the newly ordained to be shepherds representing Jesus Christ to seek the lost sheep and bring them back as they had been configured to be shepherds. 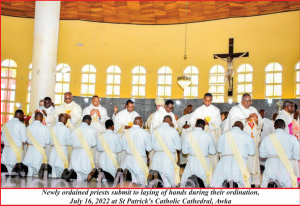 Bro. Innocent Uchenna Nwaosugwu of the Society of Catholic Apostolate was ordained Deacon.

Bishop Rhoades in his homily, described God as humble for choosing men to do His work and communicate His grace. He added that the newly ordained had the duty to teach, search the Bible and shepherd the people of God.

Bishop Rhoades explained that the ordination conferred a new status upon the deacon, saying that he was not the one performing the ordination but Christ himself as he had lent his hands to God who used him as an instrument.

He said the ordained would become shepherds of Christ’s flock to live within communities and propagate the good news of Christ; even as he charged them not to seek their interests but to care for those that Christ had placed under their watch.

The Catholic prelate said through the laying of hands and the prayer of ordination, they were consecrated to God and shared in His mission as high priests and shepherd of the Church. He beseeched God to make their ministries fruitful by leading many souls to eternal life through the help of the Holy Spirit. 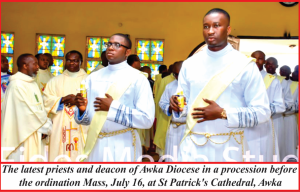 Appreciating the Bishops of Awka and Nnewi Dioceses, Most Rev. Paulinus Ezeokafor and Most Rev. Jonas Benson Okoye, for inviting him to officiate the ordination, he assured that he would always pray for the new priests as spiritual sons; even as he reminded them that the good shepherd who laid his life had called them to continue his work and mission.

He tasked all clergy on humility in the discharge of the mission entrusted to them by God, urging them not to preach themselves but Jesus Christ, stressing that the image of the good shepherd shed more light on the role and ministry of the priest in the Christian community.

He explained that by configuration to Christ, the good shepherd, a permanent bond was created; a secret seal or character imprinted on their souls at ordination which touched their very beings and souls.

He added that the image of the good shepherd would be permanently engraved in their souls as a basic principle of the ministry they were to carry out.

‘In ordination, God touches the man’s soul so that he can act in the name of His son; in the person of Christ, the head and shepherd of the Church, as His instrument for the work of salvation,’ Bishop Rhoades said.

‘The Lord Jesus is claiming you as His own, making you His priests of the new covenant of His blood. He is enabling you to be His ministers,’ he said. 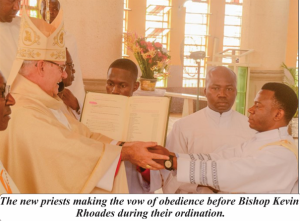 The prelate told the ordinands that they were being configured to Christ the priest, also to offer the Eucharistic sacrifice, explaining that the Eucharist was the sacrament of the Lord’s death and resurrection, of His supreme act of redemption. He added that their identification with Christ the priest and shepherd would reach a crescendo every time they celebrated the Holy Mass.

Bishop Rhoades said the priesthood was the foundation for their ministry of the word and leading and guiding the Christian ministry entrusted to their pastoral care. He stressed that the challenging part was that God called them to live a character that they received; to live as shepherds after the hearts of Christ.

Speaking to all priests and bishops, he warned that they were called to live a life ofconsecration and that their mission in the Church was incoherent if they lived as hirelings rather than shepherds, with an explanation that the good shepherd laid down his life for the sheep.

‘It should be in the fabric of our lives to give ourselves in love to our people; sacrificing for them as Jesus did,’ he admonished, adding that the good shepherd embraced the sacrifices of celibate chastity, obedience and simplicity of life for the good of the sheep.

He called against doctrinal errors and urged them to see to the provision of the flock, selflessness, generosity, closeness to people, availability; adding that they should be real spiritual fathers who were close to their children with an instruction that their consecration was not for themselves but for the Church and her mission.

In a related development, the Catholic prelate who noted that ordination to priesthood did not isolate the diaconate, said priests did not lose the diaconate character, noting that there was no good priest or bishop who was not sealed a good deacon, a seal of servant hood to the Church.

Bishop Rhoades who expressed his trust that the ordinands were resolved to be good shepherds with God’s help, charged them strongly to be faithful to prayer, citing that they had a great example in Nigeria of a priest who was a man of deep prayer in Blessed Cyprian Tansi.

‘It is your intimacy with the Lord, the good shepherd, that will give you peace and joy in your ministry.’