Awka Diocesan JDPC Vows to Advance the Cause of Poor Masses

In his remarks, the chairman of the occasion, Sir Pete Ibida, underscored the importance of JDPC in assisting the downtrodden and beckoned on the people of God to donate more to the cause of JDPC, noting that the arm had a special way of identifying the poor and rendering the needed help to better humanity.

Hon. Ibida who is the grand pillar of Awka Diocesan JDPC and member representing Njikoka II Constituency in the State House of Assembly, while appreciating the award, reaffirmed his commitment to the affairs of the Church and assured that he would continue to advocate for the poor masses and contribute qualitatively towards improving their living standards. 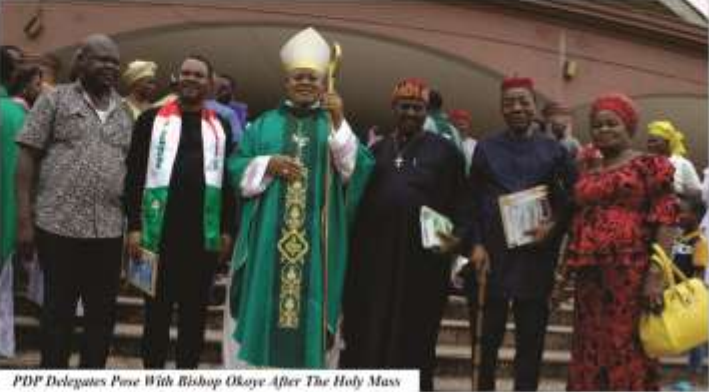 Receiving the award, the Anambra State gubernatorial candidate under Accord Party, Dr. Godwin Maduka, maintained that his life agenda of touching the poor and downtrodden could be linked to that of JDPC and disclosed his intention to work as JDPC partner.

Dr. Maduka who was represented by the DG of his campaign team, said that the antecedents of Dr. Maduka had repositioned him as the best candidate for the governorship position in Anambra State.

Earlier in his homily, Bishop Okoye, while quoting the book of Isaiah, admonished the faithful against the spirit of fear, noting that it prevented one from doing the right thing.

He explained that JDPC was instituted to fight for the promotion of justice and noted that its representatives had been saddled with the responsibility of identifying of those in need.

He stated that a priest should be prepared for his spiritual welfare as a priest’s ingenuity could be tested by how he treated the poor in the local Church under his care.