By Chioma Ndife and Adejumoke Alebiosu

The Catholic Diocese of Awka has joined her counterparts across the globe to bring to an end, the Year of St. Joseph as declared by the supreme Catholic Pontiff, Pope Francis.

The closing ceremony of the Year of St. Joseph which featured a rosary procession, was brought to an end by the Catholic Bishop of Awka, Most Rev. Paulinus Chukwuemeka Ezeokafor, on Saturday, December 4, at St. Joseph’s Parish, Umuawulu, Awka South LGA, Anambra State, through a concelebrated Eucharistic Celebration that witnessed the massive presence of priests, religious and lay faithful in the diocese.

It will be recalled that the Year of St. Joseph began on the 8th of December, 2020 (Solemnity of the Immaculate Conception of the Blessed Virgin Mary), in the eighth pontificate of Pope Francis through the letter he issued to mark the 150th Anniversary of the proclamation of Saint Joseph as the Patron of the Universal Church.

In his homily, Bishop Ezeokafor described St. Joseph as the  patron of the Universal Church in Roman Catholicism, noting that his life was recorded in the Gospels, particularly Matthew and Luke, as a descendant of the house of King David. The Catholic prelate added that the life of St Joseph could be likened to that of doctors and nurses.

While inaugurating the year of St Joseph, the Holy Father likened the life of St Joseph to that of many doctors, nurses and care givers, who amid the COVID-19 period, had been taking care and saving the lives of people silently. St Joseph is a very important figure in the life of the Church. He is a lovely, merciful father who accepted the will of God in his life and took up the work God had destined for him,’ he said. 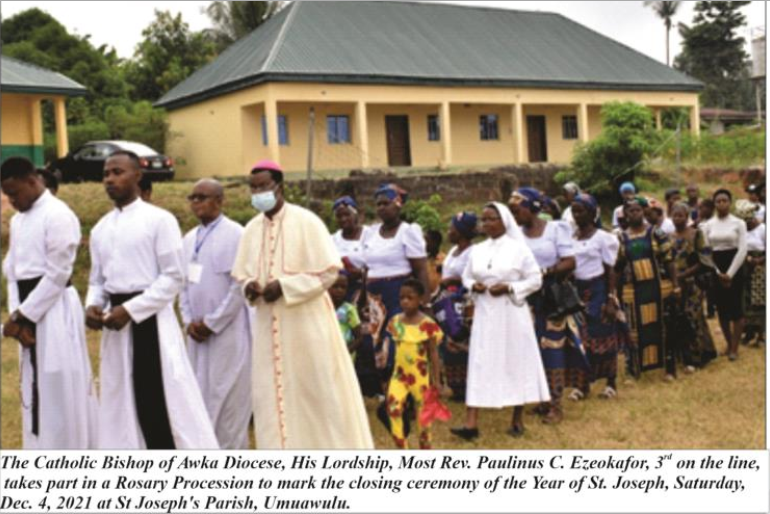 Bishop Ezeokafor also challenged Catholic faithful not to celebrate St Joseph as if it was just a ritual but to be mindful enough to emulate the lifestyle of the saint.

Speaking to Fides, Bishop Ezeokafor said the declaration of the Year of St. Joseph was in line with the Church’s affair of keeping its faithful busy all year round by coming up with one event or the other and fixing celebration for its faithful to recognize fathers in faith.

He said that the Year of St. Joseph was inaugurated because of the outbreak of the COVID-19 pandemic in order to recognize the work of those in the field of medicine, especially nurses and caretakers who were previously regarded as unimportant personalities. He said that St. Joseph was taken in the same manner as the medical workers after his work for the Holy Family.

He disclosed that Joseph was very obedient to God, a responsible person working for the good of the family, taking care of the Child Jesus despite knowing that the child was not his biological child.

The Catholic Shepherd stressed the need for continuous emulation of the life of St. Joseph. ‘We are grateful to God for the gift of St Joseph to the Church.

He remains a big model for Christian fathers, because he really took care of the responsibility given to him by God. In the same manner, we call on all fathers in their various families to be responsible to their families, taking  good care of them.’

He reiterated the need for people to develop strong faith in God, especially with the various happenings across the world, saying that having faith helped one to sustain life. He defined faith as something being anticipated and not yet realized.

He noted that the celebration would ginger people, especially fathers, to have direction and live out good family lives by imitating St. Joseph.

He outlined the various activities which the diocese had put together in line with the directive given by the Catholic Pontiff, saying that no two celebrations were the same. He tasked Ndi Anambra to open their hearts for reconciliation with God and their neighbours and also in that spirit of love share what they had with others.

He prayed that St. Joseph would continue to inspire families to live their lives as the Holy family of Jesus, Mary and Joseph, and noted that the celebration would ginger people, especially fathers, to have direction and live out good family lives by imitating St. Joseph.

While commending the efforts of the committee of the Year of St Joseph, led by Rev. Fr. Louis Nwobi, for a successful event planning, the prelate appreciated everyone for coming out to grace the event.

Also speaking, the Committee Chairman of the Year of St Joseph in Awka Diocese, Rev. Fr. Louis Nwobi, announced the various activities put together to commemorate the celebration and thank God for the success of the year. He also said the committee was able to fulfill its reason of inauguration.

Adding his voice, the Awka Diocesan Chancellor, Rev. Fr. Francis Chidume, said the year was declared to enable Christians to know more about St. Joseph in order to appreciate his role in the Holy family of Nazareth. He noted that the benefits that came from such celebrations were always spiritual, especially the plenary indulgence that was mostly received through the celebration.

Contributing, the host Parish Priest, Rev. Fr. Benjamin Odika, said that hosting the closing of St. Joseph’s Year was one of the epic making events in his pastoral duties as a priest. He maintained that the benefit which the parish and the community would derive from hosting the celebration could never be counted, saying that it challenged the parish to put a number of structures in place.

For his part, the traditional ruler of Umuawulu Community, HRM Igwe Dr. Joel Mmaduadichie Egwuonwu, expressed joy to host the Catholic Diocese of Awka in his community and hoped that the celebration would bring good things and propel his community to a greater height.

The chairman of the occasion, Barr. Nkem Anieke, expressed the hope that the year would enable fathers to live up to their Christian calling and responsibilities, both at home and in the Church. He argued that the leadership of the umbrella body of the male group in the church had a lot to do to make fathers more proactive in their responsibility.

Highlights of the event were planting of trees in memorial of the Year of St Joseph, trophies and award presentations to winners of the quiz competition, dance presentation, donations among others.

Fides recalls that Catholic Diocese of Awka started the year with the inauguration of the Year of St Joseph in March, followed by celebrations in parishes and regions. A quiz competition was also organized to mark the celebration.