Despite the best efforts of the Gov Willie Obiano-led Administration to give the people of the state, especially residents of Awka, the capital city of Anambra, a befitting capital, infrastructure wise, one area is sticking out like a sore thumb. It is the area of environmental sanitation. The state capital has virtually been overwhelmed by garbage, with residents of the city struggling to have a foothold in some streets where roads have been taken over by garbage.

With the first flight landing at the international Cargo Airport located in Umueri, Anambra East Local Government Area, expectations are that many people will be attracted to the state to do business, but the unpalatable environmental situation is removing the gloss from that prospect. In this report, Alexander Johnson Adejoh and Adejumoke Alebiosu, sample the reactions of the people of the state to the sordid situation; even as they seek the state government’s views on the way out. 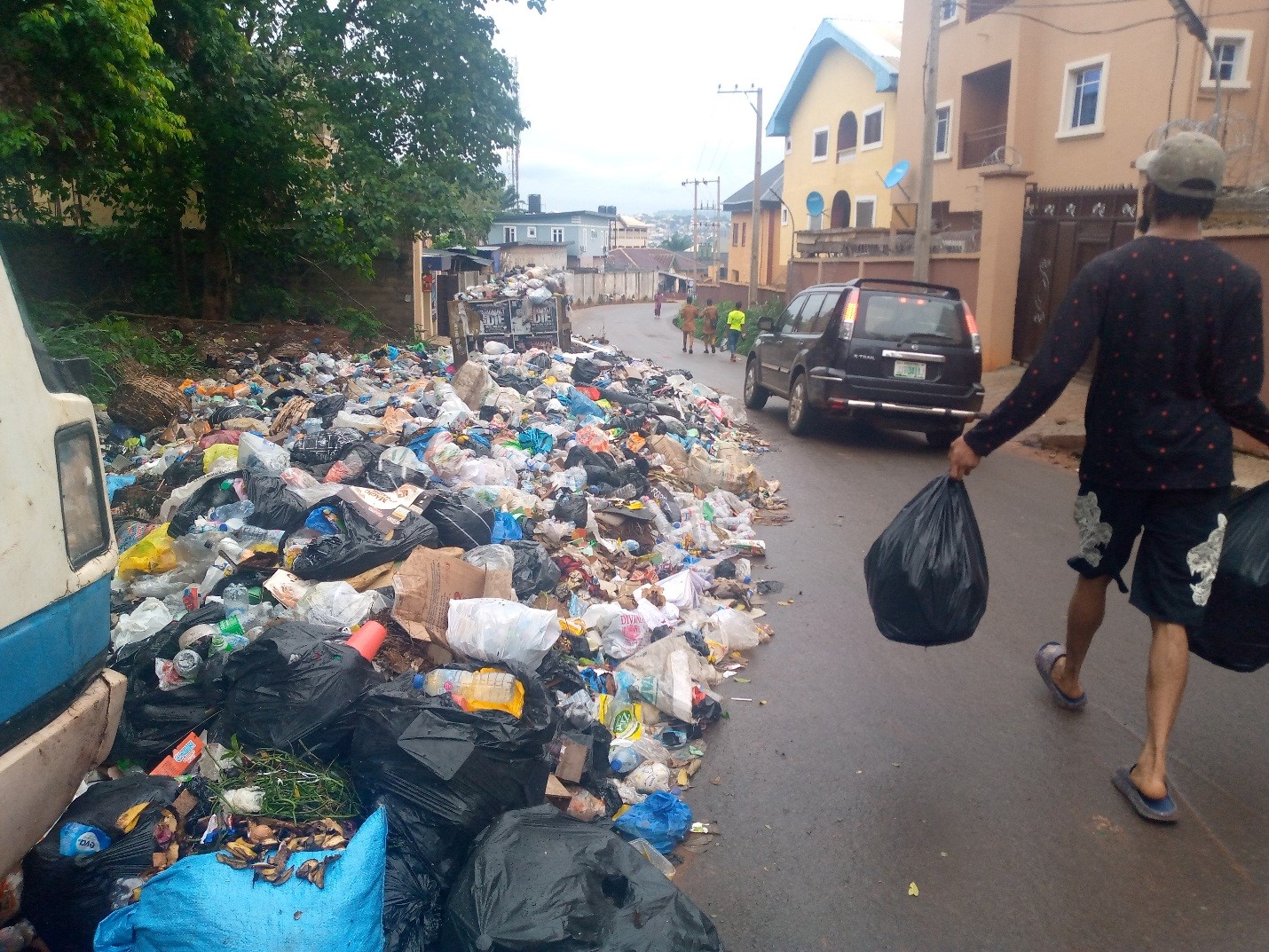 Speaking to Fides, Victor Nnamdi, an indigene of Awka who lives in one of the semi-highbrow districts close to Zaramax Hotel located at Okpuno, said he had developed a rather awkward habit of spitting at every short interval when walking in the neighbourhood.

‘On our street, there is a long concrete drainage, parts of which are filled with slimy polythene bags, plastic bottles and other waste materials.  The concrete slabs are broken, and dirty water seeps into the road,’ he said.

Nnamdi said the fetid odour coming out of the drainage nauseated him, forcing him to spit at regular intervals whenever he passed the road.

‘I don’t like bad smell, it irritates me,’ he said.

‘Whenever I perceive an offensive odour, I find it hard to swallow saliva.’Fides noticed that Nnamdi may not be the only one put off by the acrid smell emanating from that spot.

Students of Community Secondary School, Okpuno, who pass through the spot on their way to and from school, are usually seen covering their noses with their uniforms as they walk quickly or run past the garbage strewn area.

Apart from the Okpuno area, overflowing drainage and waste can also be found in other areas of the Awka City centre such as Nanet-Ichida Street in Umudioka Village; Kwata; Unizik-Tempsite and Ukwuoji.

Fides observed that waste and drainage in the main districts of the city are poorly maintained, causing a poor sanitary condition that poses danger to people’s health.

The situation is worse in the environs of Awka, mainly villages, because the majority of the areas do not have well-constructed drainage system which is not helped by the lukewarmness of the officials of the Anambra State Waste Management Agency, ASWAMA in carrying out their duty.

A cab driver, popularly known as Uchenna, said the situation would be worse now, noting that once it rained, the roads became almost very dirty, and impassable for humans and automobiles.

‘I don’t think it is normal for the gutter to be like this. If rain should fall, you will see water flowing to the road, unclean water containing faeces and urine,’ he lamented.

Uche however said the problem was worsened by people who dumped refuse inside the drainage. ‘Some people will never care about using a waste bin. They will prefer to throw dirt inside the gutter,’ he said.

He called on Anambarians to be responsible enough to stop dumping refuse on the streets and instead visit the ASWAMA office and demand that they come and remove the waste.

Reacting, Mr Amaechi Akorah, Managing Director of ASWAMA, disclosed that the agency had been rendering incomparable outstanding waste management service in the state for decades and that the drainage that were blocked, according to him, was a result of the bad habit of people who did not properly use the drainage systems.

He said, ‘I must admit that the wellbeing of Anambarians remains utmost in our mind, and as we approach the rainy season, we cannot just watch but also intervene, to avoid an epidemic by ensuring regular removal of waste across the state.

‘We can’t afford to let the Keep Anambra Clean Project fail because if it does, we will also be considered a failure, hence the need to take responsibility as a people-oriented group to render service, whether paid or unpaid.

Mr Akorah, who lauded the efforts of the Gov. Willie Obiano Administration in combating dirt within the state, called on media houses to continue to sensitize Anambrarians and educating them to stop unlawful disposal of waste.

He thereafter promised that the heap of refuse at Ossy Gambia Road (Zaramax Hotel axis) would be cleared before 3 pm that day; a promise that was fulfilled. Mr Akorah called the Fides reporter on the phone around 5pm to disclose that the refuse there had been cleared. This was confirmed by Fides when its crew got to the place same evening.

Meanwhile, when Fides visited Awka and environs, it was discovered that open drainage along the streets has become an eyesore to members of the public. Parts of the drainage at Umudioka were blocked and the channel filled to the brim with stagnant water covered with algae and waste materials.

However, the poor condition of Awka does not seem to hinder commercial activities around the city. Traders interviewed said they just had to ignore the stench since they were out to make money.

With the rains finally setting in, residents of the capital city may have to brace up for the worst as after heavy rains, the streets are usually strewn with garbage swept from the gutters.