… Prepare yourselves, for death is the inevitable end of every person – Bishop Ezeokafor

Awgbu Community in Orumba North L.G.A of Anambra State was shut down on Friday 13 August 2021, as the remains of the Queen of Nwajagu’s family, late Mrs Elizabeth Akuchukwu Nwajagu, who died at age 83, was laid to rest. 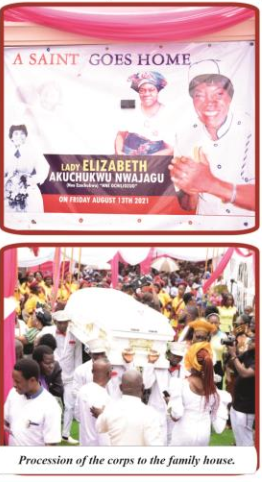 Late Mrs Nwajagu who was born at Ekwulobia, Aguata L.G.A on 28th March 1938 to the family of late Chief Ezechukwu Nwachulumma Ezobu of Umuochuba, Agba Ekwulobia, was born into eternal life after battling with ill health on 26 April 2021.

The deceased was a renowned teacher, a zealous soldier of the Legion of Mary, member to numerous pious associations in the Catholic Church, and a strong devotee of the Blessed Virgin Mary.

As a renowned teacher, who saw her teaching career as a call from God, she served her people in various communities in Anambra State from 1957-1992 when she retired with special grade as a Headmistress.

The funeral Mass, presided over by the Catholic Bishop of Awka Diocese, Most Rev Paulinus C Ezeokafor, alongside other priests’ concelebrants, was held at St. Patrick’s Catholic Parish, Awgbu.

Bishop Ezeokafor, in his homily during the Mass, harped on the necessity of Christians to prepare their ways here on earth. He explained that those who were alive still had the opportunity to make their ways right by ensuring that they served God through their services to humanity. He urged the congregation to dedicate their lives to ensuring that people they encounter daily experienced Christ through their attitudes towards them.

Talking about the life of the deceased, Bishop Ezeokafor, described her as a distinct personality who had used her vocation as a teacher to sharpen and impact the lives of not only her children but many people she encountered. He explained that her dedication to the things of God was evident in the testimonies of priests, religious and the lay faithful in the Diocese. ‘Everybody speaks good about her, and her life reflected all that was said about her’, the prelate noted. 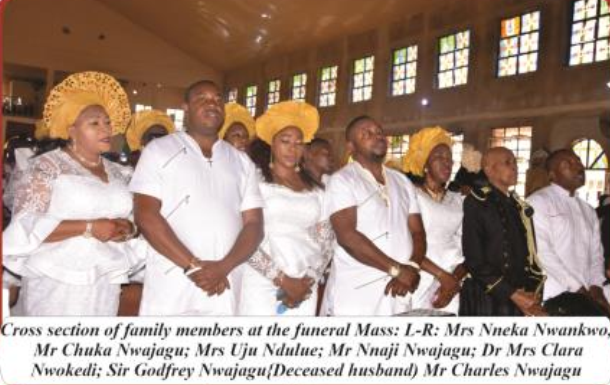 He prayed that the Holy Spirit would fill the space that her exit would create in the family, even as he commended Rev Fr Hillary Nwajagu, the deceased’s son. who he noted had been toeing his mother’s footsteps in structuring the educational system in the Diocese. He explained that Fr Nwajagu was on transit to the United States of America, when the news of his mother’s death got to him and had remained strong in faith.

Bishop Ezeokafor commended the parishioners of St. Patrick’s Catholic Church, Awgbu for the church’s rectory and hall they were erecting, exhorting them to erect a tower to improve the church building.

In his remarks at the Mass, Fr Nwajagu, said that his mother was a model who lived her life for Christ till death, and he described her devotion to the Blessed Virgin Mary as very contagious. According to him, his mother inculcated in them and all those who encountered her a high level of discipline and moral probity. 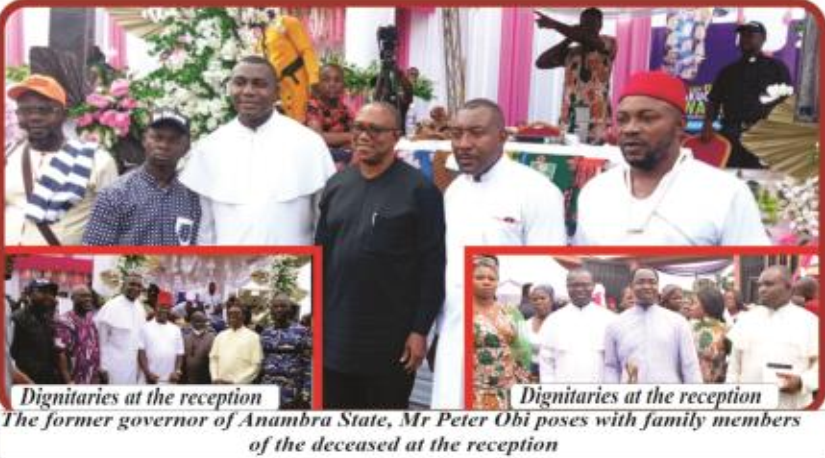 He thanked in a special way Bishop Ezeokafor, for presiding over the event notwithstanding his his tight schedules. He also commended priests and religious present, for coming out in their number to grace the event of his mother’s burial.

He said, ‘Thank you for being brothers indeed; there is no fraternity compared to that of the Catholic priesthood’.

On behalf of his family, Fr Nwajagu, announced that his family would solely build the tower for the church in memory of their mother.

In the funeral oration by the family of the deceased, read by the first daughter, Dr (Mrs) Clara Uzoamaka Nwokedi, they noted that it was devastating to come to terms with the reality of their mother’s death. As they recalled the days, they came back home to see their mother but would now behold her empty room. They prayed that her soul found eternal rest. 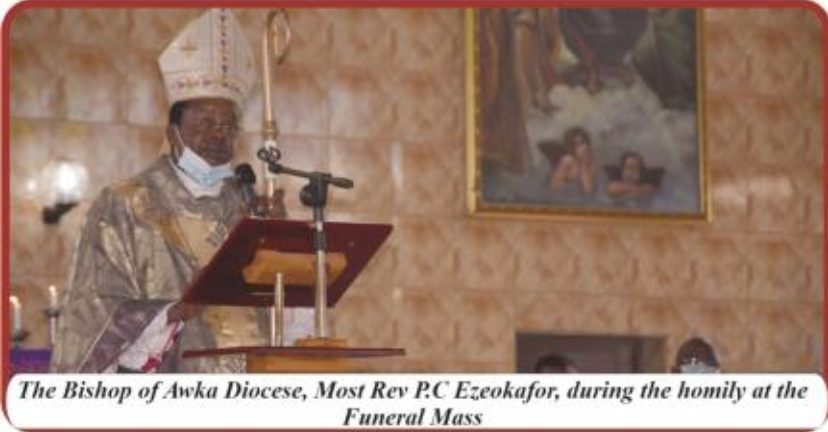 The funeral attracted the who is who in the society, among which were: the former governor of Anambra State, Mr. Peter Obi; Senator representing Anambra Central in the Federal Constituency, Sen. Iyom Uche Lilian Ekwunife; the Traditional Ruler of Ekwulobia, Igwe Engineer Onyeneke; Member representing Njikoka II in the Anambra State House of Assembly, Hon. Ebele Ejiofor; the Director, Catholic Women Organization, Awka Diocese, Lady Ngozi Ndigwe, among other dignitaries.

Mrs Elizabeth Akuchukwu Nwajagu was interred in her family home in Awgbu. Among the highlights at the funeral was live music from veteran musician, Prince Gozie Okeke.