Adilo who bagged an award of honour from the College sequel to his contributions and efforts towards the growth, made the promise during the 2021 Patron Feast Day of the College.

He maintained that he undertook to build a grotto for the Blessed Virgin Mary as an advocate of Mary and has been sharing of the Blessed Mary. He said that the grotto when completed would help to propagate the message of Mary to the students. 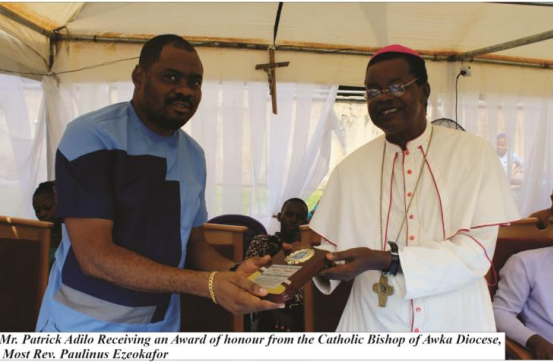 He expressed optimism that the siting of the grotto in the College will enable the students understand what it means to develop an effective relationship with the Blessed Virgin, saying that he has tasted the power of prayer and had received answers to his prayers through the intercession of the Mother of God.

He charged the students on the importance of doing the work of God from infancy and beyond, urging them not to become  advocates of social media when they leave the school environment. He commended the location and conducive environment of the school, saying that all has been put in place to enable the students attain their life aspirations and dreams.

Appreciating the donor, the School Manager, Rev. Fr. Martin Ekee, said that the grotto of the Blessed Virgin Mary when completed would be of immense benefit to the students, saying that they would deepen their relationship with Mary.

He thanked the donor for undertaking to build the grotto and said that College team appreciates his benevolence.

The College, in her address of welcome presented by a students, Omasilchi Benardin    Okoli, maintained    that despite the giant strides which it had recorded in the field of academics and infrastructure, the College was still faced with the biggest challenge of building a chapel for prayers and meditations, as well as an examination hall.

It disclosed that the school refectory currently served as a multi-functional asset, as it also served as a chapel, a meeting venue and an examination hall, saying that students were mostly forced to eat out side on the verandas during external examinations like WAEC and NECO.

She said it was hygienically absurd and a chronic abnormality for children to be formed under such conditions and appealed to good spirited individuals to assist the college.

She identified landscaping of the school compound, provision of solar powered electric facility, entrance gate, Grotto of the Blessed Virgin Mary, an administrative block and computers, as other needs which the College was saddled with and beckoned on good spirited individuals and parents to assist the college for efficient training of the students.

The address read that the College recorded a whopping hundred percent pass in the external examinations in Mathematics and English Language, as well as other subjects, stating that a student, in the person of Ifunanya Adimuo, scored an amazing score of 299 in the 2021 JAMB examination.

The address also has it that the College has well equipped science laboratories, 47 units of toilets and bathrooms built by the college PTA, alongside the ones situated inside the hostels, stating that the facility had improved students’ health, placing the ratio of student to toilet to 6 students to a toilet.

Other achievements recorded by the Management include the provision of steady water supply, employment of cleaners’ services and creation of defined entrance route into the College premises.