The Chief Medical Director of Chukwuemeka Odumegwu Ojukwu University Teaching Hospital, Amaku Awka, Dr. Joe Akabuike, has described the award given him by the alumni of the University of Nigeria Nsukka as very dear to him.

Akabuike received an “Icon of Health Management and Service to Humanity Award “ by the University of Nigeria Nsukka Alumni Association (UNAA), Awka Branch, in recognition of his contributions to safe and improved health care in Anambra State.

Dr. Akabuike, who, received the award during the 2022 UNAA Awka Branch’s Alumni Association Forum and End of Year/Award Ceremony held in Awka, expressed delight at the award, noting that it came from those he described as the elite and noble people. He assured that he would continue to contribute his quota to ensure the progress of the association.

Earlier, the Deputy Vice Chancellor, Administration, Nnamdi Azikiwe University, Awka, Professor Joseph Ikechebelu, who was the Guest Lecturer, x-rayed the theme of the event, “Celebrating UNAA Brand Icons in the Service of Humanity”, and made it clear that those who assisted humanity could not be forgotten, even as he described the awardees as meritorious people. 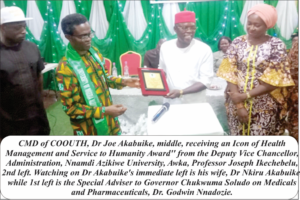 The Chairman on the occasion, Professor Ogo Ibeneme, described the event as one aimed at remembering their institution as well as recognizing their icons in order to motivate their new students.

The President of the Association, Dr. Chinedu Mbalisi, said the event was designed to honour their resourceful icons in their service to humanity, as enshrined in the university’s motto which is to restore the dignity of man.

He stated that all their awardees deserved the honour given them, even as he solicited for support to purchase a bus for efficient mobility of the association.

Dr. Mbalisi described Dr. Akabuike as one of the shining lights of the association, whom, he said, had distinguished himself in the service of God and humanity

Dr Akabuike was accompanied to the event by the Special Adviser to Governor Chukwuma Soludo on Medicals and Pharmaceuticals, Dr. Godwin Nnadozie, who is also the Managing Director and Chief Executive Officer of Anambra State Oxygen Gas Plant; the National Vice President, Ohaneze Ndigbo Worldwide, Chief Damian Okeke Ogene, the Head of Department Accounts of COOUTH, Mr. Okey Nworie, among others.