Comrade Chikwelu who stated this while addressing newsmen in Awka, chided the governors and states who refused to support local government autonomy, describing them as the reason for the country’s present rot; even as he commended Governor Chukwuma Soludo for supporting the bill and also thanked the Speaker of the Anambra State House of Assembly, Rt. Hon Dr Uche Okafor, and his colleagues for passing the Local Government Autonomy Bill.

‘I want to thank specifically the Anambra Assembly for passing the Local Government Autonomy Bill initiated by the National Assembly for the consideration of the 36 state assemblies.

‘I am happy that members of the assembly arrived at a unanimous decision to pass the bill.

‘I commend the lawmakers for living up to the people’s rating. The step taken by the current Anambra State House of Assembly for the quick consideration and passage of the bill is highly commendable. 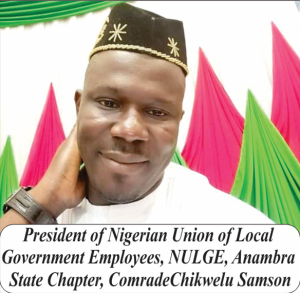 ‘While Nigerians await other state Houses of Assembly to join the progressive train, Anambra  House of Assembly has written its name in gold as workers and people at the third tier of government will remain eternally committed to benefiting from the dividend of democracy the passage of the bill would bring,’ he said.

Chikwelu said governors opposing full autonomy for the 774 councils were doing so for selfish reasons and were the real problems of the country.

‘The Holy Bible says when the foundation is destroyed, what would the righteous do? The local government system has been relegated. No wonder our youths are engaging in ritual killings, banditry, kidnappings and yahoo-yahoo because the foundation upon which we are built has been destroyed.

‘The continued challenges of insecurity, insurgency, and corruption are largely traced to the systematic destruction of the local governments. All these social vices staring us in the face were not there before 1999. The only antidote is local government autonomy.

‘It is time the cord connecting Local Governments to states was cut off so that they can enjoy financial autonomy to be able to meet the needs of the people.

‘Enough of not respecting the tenure of council officials; enough of local governments not having the full financial benefit of their monthly allocations. 75 per cent of the people live in the rural areas and that should be a basis for our councils to be fully operational.

‘The bill is now at the doorstep of the Houses of Assembly. We are crying loud and clear that they should pass it in the interest of the over 75 percent living in the rural areas. They should come to the aid of Nigerians. We are not here talking about salary increment, but talking about how to fix Nigeria,’ he concluded.