The month of August is very important in the lives of the Igbo people generally. Traditionally, New Yam festivals are usually fixed at this period in so many villages. For women, it is the time for the married ones to assemble in their matrimonial villages in order to be a part of what is now generally known as August meetings.

At this time, these women travel down from all over the country and even the diaspora to join the local women in the villages for their annual women’s congresses which, by the way is one of the biggest meetings held in so many towns across board. This homecoming for these women is usually very massive, because the August meeting is considered the most important meeting in every Igbo community.

It is a designated time mapped out for the women from the city to join hands with their local counterparts to discuss matters concerning how to develop their communities, human development, settlement of so many disputes in the community, as well as other socio-economic and cultural initiatives. It is usually held in three days and divided into three parts. The first part is held at the village level, the second is usually held within the community while the third is held in churches in order to also help raise money for projects being carried out in these churches. 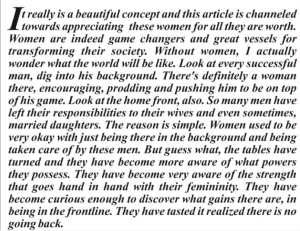 It usually ends with a Thanksgiving Mass which officially brings the August meeting activities of the year to an end. Once upon a time, so many folks viewed everything concerning these August meetings with a lot of skepticism and negativity and I won’t blame them because of the circumstances that surrounded the reasons for that negativity.

That was the period when so many women, especially the rich and influential ones would prepare elaborately for the meeting in such a way that they spent so much money on expensive wrappers, jewelry and lace materials, that their local counterparts or even their members from the city who could not measure up began to feel a certain kind of inferiority complex.

These city women always intimidated  other women with those expensive clothings, wrappers and jewelry. As a result so many women who could not meet up with such levels of dressing ended up looking for ways to meet up to be like the others. In subsequent meetings, some of them would go and borrow clothes in order to look like their counterparts from the city, while some others would go as far as borrowing money to buy those clothes and look good at the August meeting.

Others would mount so much pressure on their husbands to provide them with the money to prepare for these meetings, failure to do it, definitely  caused nothing but problems in the family. As a matter of fact, so many men  started to see August meetings as something they would rather not to have their wives be a part of, because it always caused serious problems when the kind of money they demanded was not provided.

Eventually this problem became a thing of the past when the organizers of these meetings reached the decision that women should appear in specific uniforms to the meetings, which helped a great deal to stop the pressure and unhealthy competition among these women.

The question is, what is it about these August meetings? What’s so special about them? How did it even come into existence? Well, I did some reading and found out that the presently popular annual gathering of women, now known as August Meeting originated from the Catholic Women Organization (CWO) and was said to have been founded by Mrs V.V.I Okoye Of the Onitsha Ecclesiastical Province of the Catholic Church before the Nigerian Civil War. According to history, Mrs V.V.I Okoye was said to have established different CWO branches in many Catholic dioceses in the country and even beyond.

These Catholic church women organizations eventually promoted the practice of married women assembling in their husbands’ villages every August to help contribute to developmental projects. Majorly, when these women assemble in the villages every August, they discuss matters affecting women. They have so many economically vulnerable women and set them up with businesses to do in order to be able to take care of their families. They also usually held women empowerment programs during the meetings.

Local women also have the opportunity to exhibit their products during these meetings. Most times, they smile home with plenty of money after being patronized by their counterparts from the city. In so many towns in Nigeria today in the South East, it is through these August meetings held every year that the CWO women take over projects like assisting children and the youths with their school fees, renovating or building town halls, building market stalls for rural women, handling maternal health projects and even resolving conflicts in their local communities.

It really is a beautiful concept and this article is channeled towards appreciating  these women for all they are worth. Women are indeed game changers and great vessels for transforming their society. Without women, I actually wonder what the world will be like. Look at every successful man, dig into his background. There’s definitely a woman there, encouraging, prodding and pushing him to be on top of his game.

Look at the home front, also. So many men have left their responsibilities to their wives and even sometimes, married daughters. The reason is simple. Women used to be very okay with just being there in the background and being taken care of by these men. But guess what, the tables have turned and they have become more aware of what powers they possess.

They have become very aware of the strength that goes hand in hand with their femininity. They have become curious enough to discover what gains there are, in being in the frontline. They have tasted it realized there is no going back. Women are family oriented naturally, which is why they go on these self discovery adventures and end up using their gains to keep the family going: Women fill in the gaps in the home. That’s also because they are structural beings by nature.

They believe that the home should be structured and every thing that makes a family going is applied. That is talking about values, warmth, discipline and what have you. Women are goal oriented which is why they achieve whatever they set their hearts to achieve. That is why you can see a woman selling cocoyam and palm kernels (Akwu na Ede), in Ochanja market consistently and end up using the money she makes from it to train her children in school and build a four bedroom bungalow in her compound.

It’s all about setting their hearts to who they have discovered themselves to be and reaching for the set goals their hearts yearn. Please, do not think for one minute that I have digressed from my August meeting musing. No way! This is just to appreciate my gender for laying great roles in the development of their homes, villages, towns and by extension, their country, Nigeria at large.

I am trying to appreciate women from my Igbo race for their strength and resilience as they struggle day to day, either trying to make ends meet in the home or to meet up with societal pressure, such that we see in August meetings where they are given massive projects to undertake.

Let us not also forget that these August meetings serve as a sort of entertainment for women. I mean, women need to unwind. It feels good to leave the men and children behind once in a while and go to the village without any stress of caring for the home, cooking and cleaning. For a change, women go by themselves and have fun at the meeting. Most times, there is plenty of entertainment, dancing and catching up with friends and relatives you haven’t seen in a long time.

It’s truly interesting and I can’t wait to be a part of my town’s August meeting in a week from now. I had to take time out to write this in appreciation of all the great women out there who in one way or the other have contributed greatly to the growth of their towns and villages. Sometimes what we do as women are not appreciated or even acknowledged, but the good Lord who sees the hearts of everyone knows that if women are taken away from our local communities, there isn’t much that the men can do, especially in the areas of making impacts.

To all the organizers of the different August meetings in different towns that cut across Igboland, I pray that God Almighty in His infinite Mercy will continue to organize your homes, workplaces and even your marriages just as you work for the good of your communities.

I encourage men to allow their wives to partake in this yearly assemblage of powerful women who take delight in the building, development and empowerment of their immediate home state. There is so much to learn and so much to offer. God bless all Christian Mothers for going the extra mile to contribute their quota to humanity. I love you all!!!