These are neither the best of times for security personnel in Anambra State nor for the image of the state. Having basked for long in the euphoria of being the safest state in the country, Anambra today has suddenly turned to a theatre of the absurd where it is fast turning to a scenario that can be likened to one day, fresh trouble. This is no thanks to the murderous activities of gunmen who have been singling out security personnel in the state for senseless killing.

From Omogho to Nkpologwu, through Neni, Awkuzu amd Nanka, it has been the same tale: killing of security personnel, burning of their vehicles in some cases, and carting away their weapons. The incident last week in Nanka was particularly touching and outrageous at same time. A female prison official was killed alongside her male colleague as they returned with a suspect from court. The suspect was reported to have been taken away by the attackers.

Just last Sunday morning, an attempt was made at a police outpost in Mgbakwu, Awka North Local Government Area, but that was foiled by the police and vigilantes at the place. 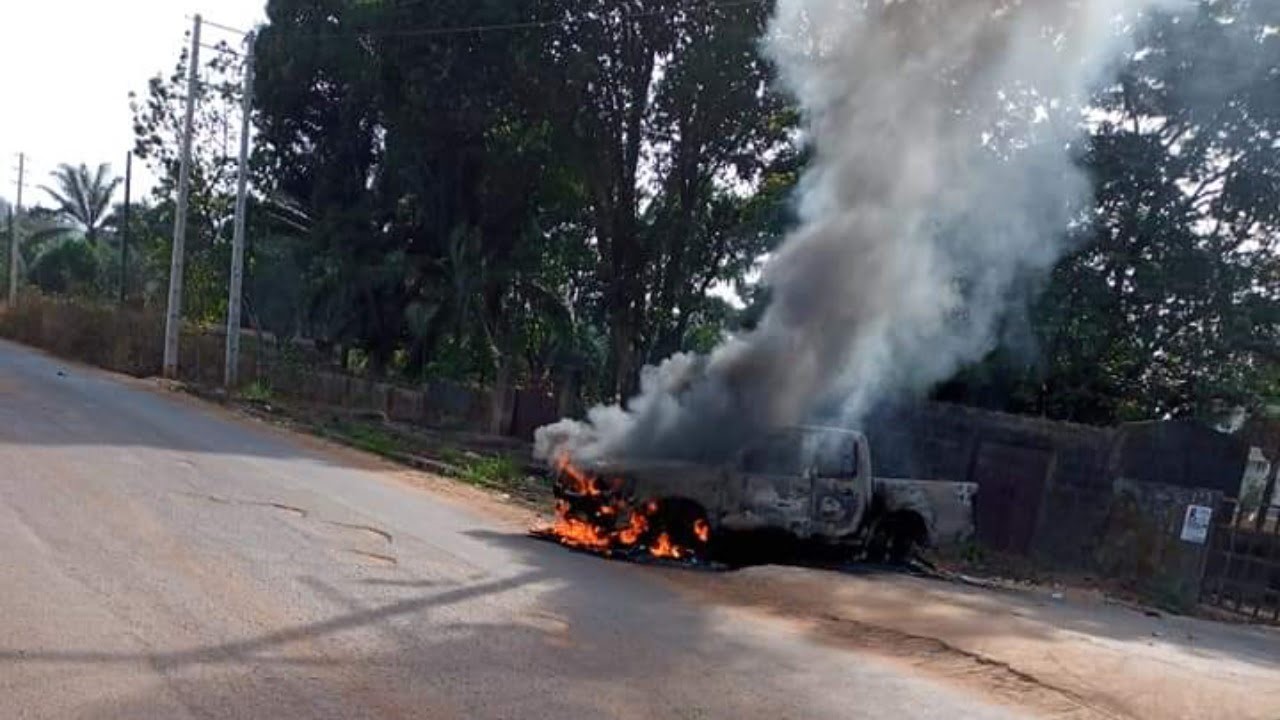 A police vehicle set on fire in Neni, Anaocha LGA, after some policemen were killed there by unknown gunmen

Long before all this, a family of three had been slaughtered inside their church in Azia, Ihiala Local Government Area, by unknown gunmen. This was apart from what has turned to be regular cult killings and kidnappings, one of which involved a lawyer and the President General of Omor Community in Ayamelum Local Government Area of the state, who eventually got killed.

As a result of these developments, security personnel, especially the police, gradually disappeared from their locations at strategic positions in the state, being that they were usually targeted at those places.

The Anambra State Government eventually reacted to the killings and announced a series of measures aimed at stemming the tide. They included ban on tinted vehicles and ticket touts at motor parks and streets, ban on covered number plates, deployment of more security personnel to the state, among others, including vowing to come down hard on cultists.

Government called on the people of the state, including traditional rulers and other stakeholders, to cooperate and help stop the carnage. Government appealed that the situation should not be laced with politics as security was every man’s job.

We cannot agree more with the government. These are unusual times and everyone is enjoined to rally round the government to nip this untoward development in the bud.

The implication of attacks on security personnel is huge. When security operatives disappear from the streets, that could well open the door to anarchy as hoodlums will key into it to overrun the state.

We should rally round the state government and the security agencies to ensure maximum success before what is happening now becomes  a new normal.

Government should also take another look at the CCTVs it installed some time ago and find out why they have not been of help. After the hype trailing their launch, it appeared as if they disappeared. With CCTVs in place and effectively working, the perpetrators of some of these crimes would have been long apprehended.

We pray for the peaceful repose of the souls of all those killed in the recent shootings.

All hands should be on deck