The Catholic Bishop of Awka Diocese, Most Reverend PaulinusEzeokafor, says the attack on St. Francis Catholic Church, Owo, Ondo State, that left over many people dead on Sunday, June 5, 2022 is an eye opener to the Mother Church and all churches in Nigeria.

Bishop Ezeokafor who stated this at St. Patrick’s Catholic Cathedral, Awka, while fielding questions from newsmen, said that it was a wake-up call for all Christians in Nigeria, noting that it was obvious that the assailants were up against Christians and Christianity.

The outspoken prelate wondered why anyone would take another’s life, stating that lives were meant to be protected and cherished, adding that what happened at Owo and some parts of the country were a calculated attempt geared towards cowing Christ’s followers in Nigeria.The

‘I see no reason why someone in his right senses will enter a house of God and start shooting at innocent worshippers. Life is sacred. Why destroy what you cannot recreate? It doesn’t make sense to me at all. I doubt if there’s any religion that preaches killing or asking the adherents to kill. We should be watchful. I think what they are doing is to instill fear in every Christian so they can have their way. We’ll not allow that.

‘I equally heard how they have been kidnapping Christian religious leaders and demanding for ransom. Just imagine. Where will they get the ransom money from? From the same poor worshippers? You see, we are not happy at all. Religious leaders are God’s representatives on earth. They are supposed to be respected,’ Bishop Ezeokafor stated. 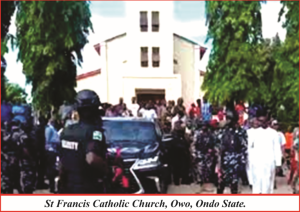 The charismatic and influential cleric attributed some of the atrocious acts to lack of adequate education, illiteracy, warped indoctrination, and unemployment.

‘No sane person will enter the bush and start living there. You can see they are animals. Their reasoning can never be the same with that of an educated person,’ he said.

The chief shepherd of Awka Catholic Diocese called on government at all levels to provide jobs for the teeming unemployed youths and pay more attention to education, saying that with job opportunities and quality education system the ills bedeviling the nation would be reduced drastically.

‘I feel so bad each time I see the way and manner the government goes about the issue of ASUU. Students are idling away. They have been on strike for four months and yet our leaders are busy talking about 2023 general elections. It is a big shame,’ Bishop Ezeokafor concluded.