After many years of existing without any source of natural water, history was on Sunday, July 5, 2021, made in Ikenga Town, Aguata LGA of Anambra State, following the commissioning and the blessing of the first ever functional borehole in the town.

Fides gathered that the 1,080 feet deep borehole with overhead tank, generator and facilities for circulation of water in the school compound, at the cost of 46,000 dollars, was donated to St Anthony’s Secondary School, Ikenga, by Gerald and Barbra Baumgart, the school’s benefactors from America.

Blessing the project, the Bishop of the Catholic Diocese of Ekwulobia (CADEK), Most Rev Peter Ebere Okpaleke, prayed that the water would be a source of nourishment to all who would make use of it, as well as source of grace of God to the donors, Gerald and Barbra Baumgart.

He described the commissioning of the borehole as the celebration of the goodwill of the donors and selfless gift of the Manager of St Anthony’s Secondary School, Ikenga, Rev Fr Michael Anigbogu.

According to him Fr Anigbogu, who hailed from Ekwulobia would have attracted the borehole project to his home, but he did not but rather did so to Ikenga Town. 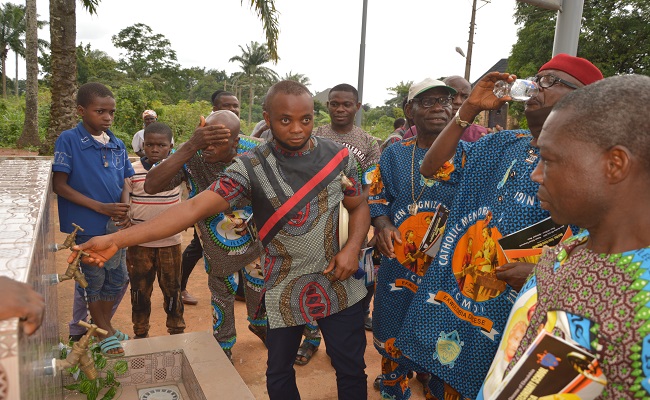 Some people of Ikenga savouring the first source of natural water to the town, St Anthony’s Secondary School, Ikenga, July 5, 2021.

Earlier when he commissioned the project, the traditional ruler of the Community, Igwe Alfred Onwuneme, Ike II of Ikenga, appreciated the School Manager and the donors for the gift of the borehole.

In an interview with Fides, Igwe Onwuneme described the borehole as a blessing to the about 1,050 years old Ikenga, which, he said, did not have any source of natural water. According to him, a borehole had been almost an unachievable project in the town because of the geographical position of Ikenga on a hilltop.

He recalled that his late father and others had in 1950 worked towards extending Obizi Stream, Uga, Aguata LGA to Ikenga, but did not succeed. He said that Ikenga, one of the sons of Okotu in Anaocha, was a warlord that later settled in Aguata LGA. According to him, Ikenga appeared to have suffered more than other towns in the local government area owing to the lack of sources of natural water.

Ikenga is surrounded on the west by Igbo-Ukwu, east by Ekwulobia, north by Isuofia and south by Ezinifite, in Aguata LGA.

Also speaking to Fides, an indigenous Catholic priest of Ikenga, Rev Fr Benjamin Ewelu, expressed delight over the borehole, describing it as a jinx that was broken in the town.

He pointed out that water which was scientifically proven to be possible in the town had not recorded success due to lack of funds which the project demanded. The Catholic priest appreciated the donors, Gerald and Barbra Baumgart; and the School Manager, Fr Anigbogu, who attracted the borehole project, for the gift of water to the school in particular and the town in general.

The visibly delighted Fr Ewelu stated his conviction that the borehole which was extended outside to benefit members of the community, would go a long way in solving the lack of natural water problem which the town had suffered for many tears.

According to him, there was no source of natural water in Ikenga. He explained that those who needed water trekked to either Otalu in Ekwulobia or to Ekwulummili to fetch water, or they fetched from rain water or bought from commercialized water tankers.

Rev Fr Ewelu, who played a major role in the founding of St Anthony’s Secondary School, Ikenga, said he was happy to be at the beginning of the history of the institution. He appreciated the two Germans, who, he said, contributed to the funds he got from Misseo Aacher, Germany, for the take-off of the school.

According to the priest, Frau Resy Stetzl, a Catholic teacher, initiated the idea that brought Misseo Aacher, Germany to donate in support of the school project, and the parish priest of St Xystus Erlangen-Buechenbach, Germany, Father Franz Guth, made the contacts which brought the fifty-two thousand Dutchmark donation from Misseo Aacher, with which St Anthony’s Secondary School, Ikenga was started. He added that Misseo Aacher, Germany also made other donations to the school.

Baring her mind on the development another indigene of Ikenga, Mrs Chinelo Iloabachi, described the borehole as a miraculous gift to the community. Mrs Iloabachi, who recalled that many attempts had been made in 1987 and 1988 to sink a borehole in Ikenga, thanked God that the project succeeded at last.

For his part, a member of Igwebuike Age Grade, Ikenga, Mr Richard Okeke, said he was very happy over the presence of water in the town. Mr Okeke, who recalled the efforts made in the past by his age grade and the Petroleum Trust Fund (PTDF) to sink a borehole in the community, thanked God that Ikenga finally had a source of drinking water.

He hoped the jinx broken by the Catholic Church would make members of the community to take a cue and attract more boreholes that would serve the people better.

Many others, who spoke to Fides, among whom was Mr Cyriacus Chinaza, a staff of St Anthony’s Secondary School, Ikenga, described the functional borehole as a miracle.