ASUU at it again as S’East Students, Parents, Groan

… We will not Join Industrial Action – ASUU COOU

The joy of resuming academic activities for some students in universities across the South-Eastern part of Nigeria and beyond has suddenly been thwarted as lecturers in the institutions have proceeded on a fresh one month warning strike.

Fides discovered that the latest strike by the academic staff comes at a time when Nigerians are struggling to catch up with lost grounds occasioned by coronavirus pandemic that paralysed the school system for almost a year.

The call by the institution’s Academic Staff Union of Universities, ASUU, for its members to desert classrooms which came up last Monday February 13, following the Federal Government’s failure to honour​ the agreements it had​ with the Union since 2009, has infuriated most of the students who only resumed the second semester of the 2021/2022 academic session last January.

The agreement includes the replacement of Integrated Personnel Payroll Information System (IPPIS) with the University Transparency and Accountability Solution (UTAS); release of the reports of visitation panels to federal universities; and improved funding for revitalisation of public universities and others.

This is even as the Academic Staff Union of Universities branch at Chukwuemeka Odumegwu Ojukwu University (COOU), Igbariam, Anambra State, has stated it would not join the ongoing one-month industrial action embarked by the national​ body.

The Chairman of ASUU-COOU, Prof. Osita Chiaghanam, said the state-owned university would not be shut down because the students would be the greatest losers. 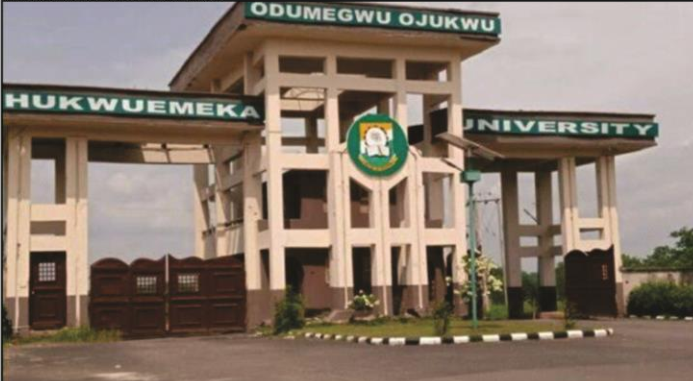 ​According to him, ASUU-COOU placed a high premium on students’ studies and would not​ disappoint them by joining the strike.

‘We don’t receive our payments through IPPIS. The revitalisation is a general matter. Our state government always pays our salaries. Arrears, pensions and promotions have been cleared. Our University is running smoothly. That is why we don’t have to join the strike. Go round the university community to confirm for yourself. You can see students being​ attended to,’ he added.

He also dismissed allegations that a splinter group, ASUU main-COOU, had embarked on the one month strike, noting that the majority of the university staff were members of ASUU-Progressive and as such, would not listen to those he described as a few misguided individuals.

‘We are an internal pressure group with a job to ensure that the life is kicking. Our effort is to safeguard our Union from being misused or misguided by a few individuals. To correct what the main ASUU in our University are doing which are contrary to the expectations of the university that is desirous to see that things are done the right way as they should be. And also protect the welfare of the staff,’ he noted.

The striking lecturers also claimed there was a shortfall in the remittance of their Earned Academic Allowance, EAA, which the school Management denied, claiming that it had only defaulted in the payment of excess workload, which, it said, was to be calculated and paid to those deserving at the end of the semester.

The lecturers also raised concerns about the perimeter fencing of the school for staff security in their quarters. Fides checks within the school showed that the fencing had reached an advanced stage and heavy-duty machinery was still on site.

A 400-level student of University of Nigeria, Nsukka, who pleaded anonymity feared that since he would be clocking 30 this year, any further strike action by the lecturers might affect his chances of participating in the compulsory national service. He said, ‘This resort to another round of strike by our lecturers is disturbing me sincerely.

‘As you know we are still in the 2021/2022 session and just recently, we resumed for the first semester. Originally, if not for the pandemic, I was supposed to graduate in August 2020, but because of school closure and the national ASUU strike which our institution joined, we resumed in December. My projection, according to the new school calendar, is that by May this year, I would have graduated and still be eligible for NYSC.’

He appealed to the authorities of the school and the lecturers to call off the strike because to save students like him.

A 200-level student of the Imo State University, IMSU, who also spoke on the condition of anonymity, expressed unhappiness with the development.

She said that for about two years they had constantly had delays due to strikes and school closure because of the pandemic. ‘I ought to have finished my part-two last year, but this is February 2022 and I am still in 200 level. I am pleading that they consider us because we are the ones to suffer this the most,’ she pleaded.

While the students are pleading with their lecturers to consider them, the lecturers are also appealing to the students and their parents to understand them. ‘It was because of this sympathy that our members allowed the students in some institutions to write their last semester exams for some weeks,’ she said.

‘We have tried on our part to ensure that we maintain harmony as much as possible. All we are saying to the students is that they are part of us and we are part of them because there would be no students if there were no lecturers and vice versa. We want them to understand us and also pressurise their parents to speak out because it is ridiculous if their lecturers don’t have job security,’ a lecturer of Nnamdi Azikiwe University, Awka.