The Founder and National Coordinator, Association of People Living with Sickle Cell Disorder (APLSCD), Mrs Aisha Maureen Edward-Maduagwu, has described a frontline aspirant for Awka North and South Federal Constituency under the All Progressives Grand Alliance, APGA, High Chief Dr Azubuike Ekweozor, as a grassroots politician with ears on the ground.

She spoke when Ekweozor visited the home for on-the-spot assessment of the home to find out ways to partner with them and alleviate their situation.

The Founder of APLSCD further described Ide Umuawulu as a politician with ears on the ground to listen to the challenges of the people, insisting that listening ears had set him apart as the most favoured candidate in the race for Awka North and South Federal constituency. 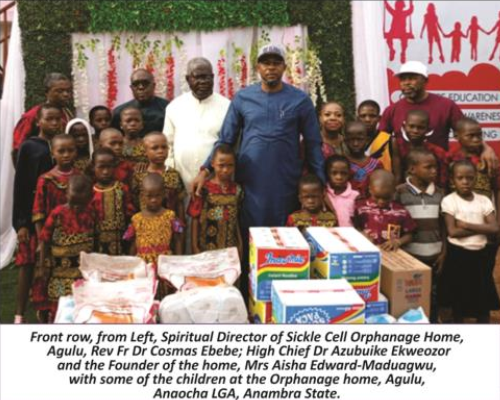 She maintained that Ide’s antecedents and achievements were in sync with the yearnings and expectations of his constituency.

She however appealed to Ide Umuawulu to make the home part of his humanitarian foundations where support could be periodically given and to always push towards enforcing the Sickle Cell Law if he secured a seat in the Green Chambers.

For his part, Rev Fr Dr Cosmas Ebebe, the Spiritual Director of the Orphanage home, beckoned on all stakeholders to join forces with APLSCD to ensure that sickle cell disorder was eliminated in society.

Rev Fr Dr Ebebe, who noted that it did not take thousands to make an impact, acknowledged Ide Umuawulu’s benevolence in the home and society at large.

Earlier, High Chief Dr Azubuike Ekweozor had reassured the Founder of APLSCD and members of his continued support and partnership with the home.

He noted that he would never relent in assisting the challenged, orphans and vulnerable group, as well as the poor and downtrodden in society; even as he advised couples to undergo proper genotype tests before marriage to avoid further procreation of people living with the disorder.

The highpoint of the event was a prayer session with the children, as well as a tour of the wards to see facilities in the home some of which were initiated and funded by Ide Umuawulu Global Movement.