Asisat Oshoala: Celebrating a female champion in the round leather game

Hello, “Inspirational Personality” Page readers! We are so excited to bring to your read this week the story of Asisat Oshoala, the first African Female Footballer to play in the Women’s Super League.

Thriving in a field that is often believed to be for the male counterpart, Asisat has scored Barcelona’s only goal in a 4–1 defeat by Lyon in 2019, becoming both the first-ever FC Barcelona Femení player and African player to ever score in a UEFA Women’s Champions League Final, apart from being the first Nigerian to score in any UEFA Champions League final, men or women. 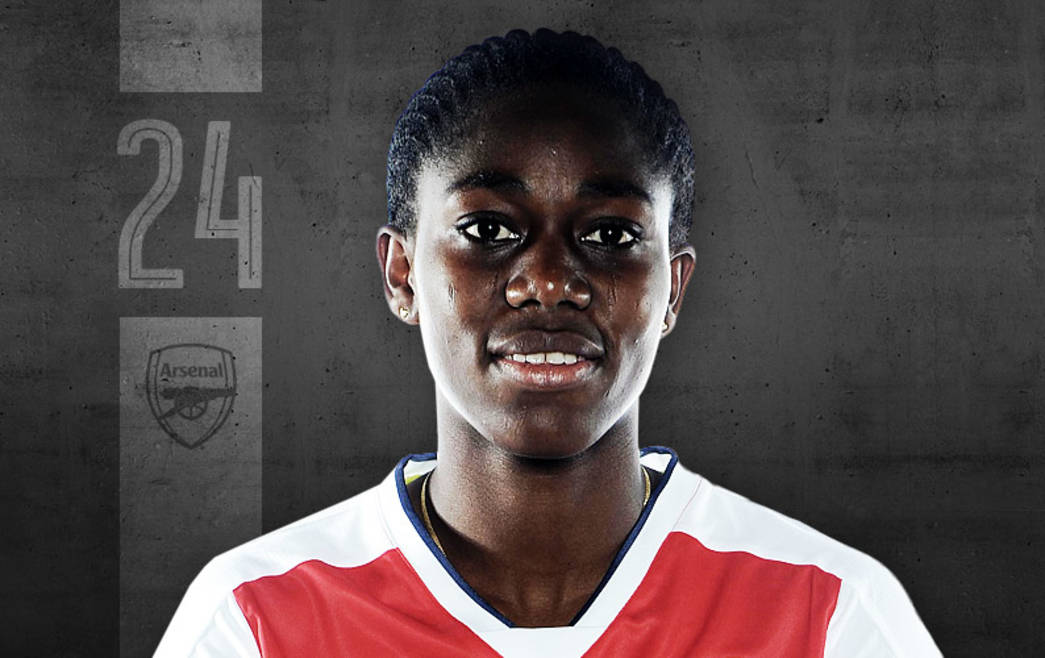 From all indications, the Nigeria Super Falcons star and former African Footballer of the Year was a victim of child pregnancy before taking football as a career, but that did not deter her from achieving her dreams.

Due to the timeliness of her recent victory, we decided to feature her this week and then continue with the story of the living legend, Rev Fr Simon Azuka, in the next edition of Fides Newspaper.

Asisat Lamina Oshoala is a perfect example of a determined child who went against all odds to ensure that her dreams become a reality. In spite of the challenges she encountered as a child, her zeal and talents gave her an absurdly high opportunity to become what she had dreamt  to be.

There was no genuine point of reference for Asisat to follow any footsteps, but she put her focus on football and left home to pursue her dream at an early age.

She was born into a Muslim family on the 9th of October 1994, in the Ikorodu suburb of Lagos State. Despite being born and bred in a lowbrow area in Ikorodu, she started her basic football career in Mushin, and this was in total defiance of the stand of her parents. Nevertheless, Asisat stood her ground and pursued a career in football.

Considering her achievements so far in the round leather game, it is safe to say that the parents who refused to let Asisat play soccer, would now be proud as parents of a football star. 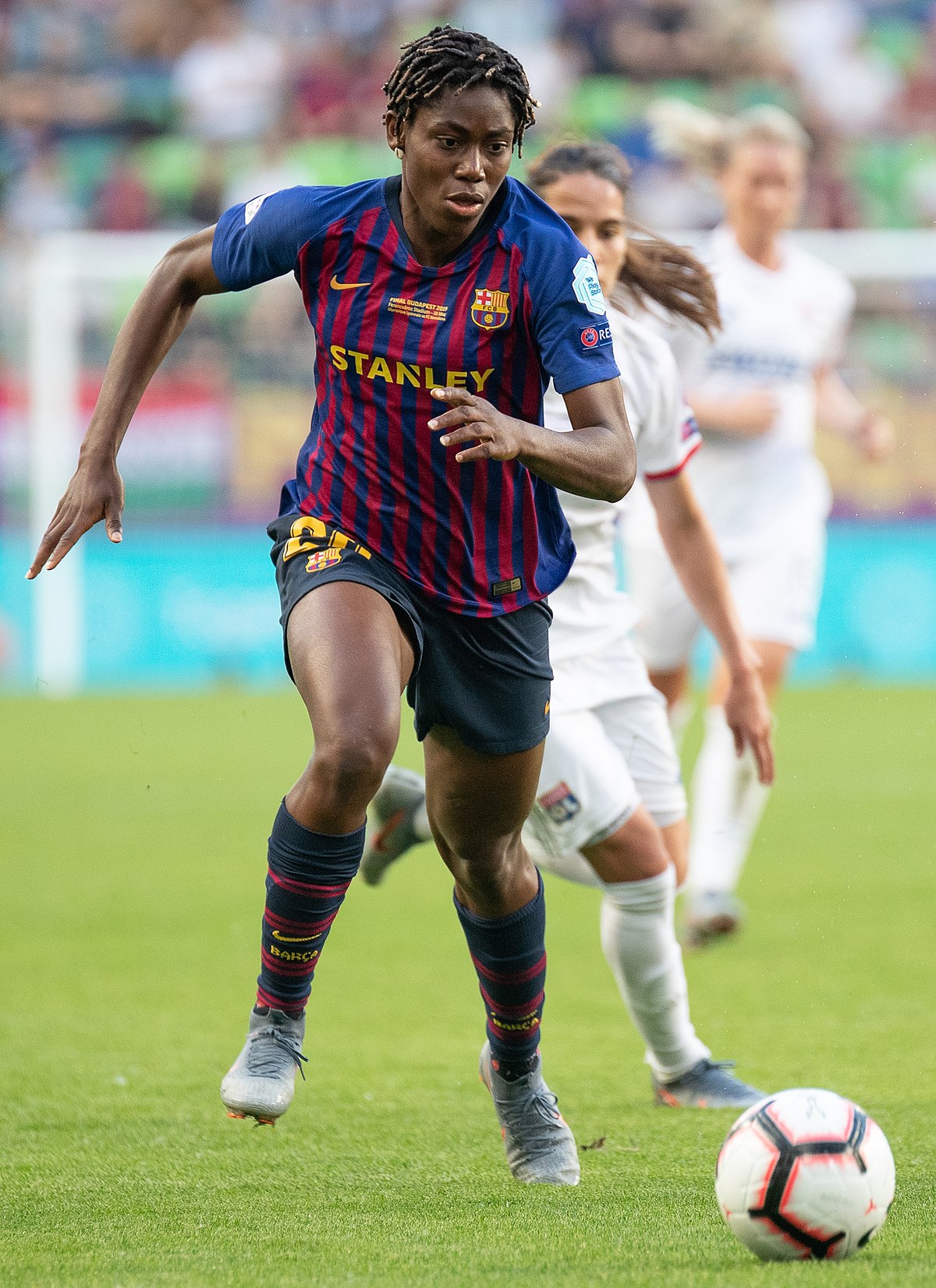 But right after her Secondary school education, she started her career at Nigerian Lower Division side FC Robo. She was there from 2009 to 2013 before moving to Rivers Angels. At Rivers Angels, Asisat broke into limelight when she represented Nigeria at the 2014 FIFA U-20 Women’s World Cup in Canada.

She emerged as the top scorer with seven goals and was named the Player of the Tournament. She won, in that competition, both the Golden Ball and Golden Shoe awards. Her performance helped Nigeria to finish the tournament as the runner-up.

After her stellar performance in Canada, she was named best player and second top goal scorer with the Super Falcons team who won the 2014 African Women’s Championship. By that time, Asisat was already a crowd-pleasing individual on the field of play; and she became a popular name both in Nigeria and overseas. Her blistering outing in Canada and Namibia did not go unnoticed.

She was called by Edwin Okon {the then Super Falcons Coach} to the Super Falcons squad to Canada again for the 2015 FIFA Women’s World Cup. Canada seems to be Asisat’s stage, as she had a remarkable outing for the Nigerian Female National Team during the World Cup. She netted Nigeria’s second goal in a 3–3 draw against Sweden. But unfortunately for the Super Falcons, they could not make it beyond the first round.

Meanwhile, Oshoala joined the Liverpool Ladies on January 23, 2015 before representing Nigeria in July 2015. The move to Liverpool made Asisat become the first African Female Footballer to play in the FA Women’s Super League. Oshoala’s impressive first season saw her win the BBC Women’s Footballer of the Year award in 2015.

A knee injury ensured that Oshoala missed two months of the 2015 season, in which her club side (Liverpool) finished seventh of the eight teams. Arsenal activated Asisat’s release clause at Liverpool in 2016, and she became a player for the female side of the North London club.

A year later, 2017, Chinese club, Dalian Quanjian F.C.’ officially signed Oshoala from the North London Female team. During her short spell in China she was the top scorer in the 2017 Super league.

And in 2019, after a wonderful spell in China, Spanish club FC Barcelona Femení signed Oshoala on a loan deal until the end of the season. She scored her first league goal against Rayo and weeks later scored in the attendance record-breaking match against Atletico Femeni at the Wanda Metropolitano

She scored Barcelona’s only goal in a 4–1 defeat by Lyon in 2019, becoming both the first-ever Barcelona Femení player and African player to ever score in a UEFA Women’s Champions League Final, apart from being the first Nigerian to score in any UEFA Champions League final, men’s or women.

The Camp Nou side announced later in 2019 that Oshoala has signed the dotted lines for full transfer to the club and extension until 2022.

So far, Asisat has done well for herself and family both at her club side and the National team. She is currently the captain of the Super Falcons after Desire Oparanozie, was stripped of the captaincy when she fell out with some of the bigwigs in Nigerian Football.

Asisat is the most clinical and dangerous goal poacher in the box, she always gets involved in game build-ups to goals and she is constantly threatening defenders and waiting on any slight chance to snatch the ball and score.

Known for her goal-scoring ability and movement off the ball, she is a good dribbler, and her height is a constant threat for aerial balls.

From all indication, the Nigeria Super Falcons star and former African Footballer of the Year was a victim of child pregnancy before taking football as a career.

When the 24-year-old revealed her first daughter to the world on social media, many were shocked that Oshola’s daughter was a full-grown girl.

According to Wikipedia, Forbes, IMDb & Various Online resources, Asisat Oshoala estimated net worth is pegged at $1-5 Million as at 2019. As for the previous year in 2018, Oshoala’s net worth was put at $100,000 -1 Million. And for the current year of 2020, Asisat’s net worth is still under review. Of course, she earned all that money playing professional football for Nigeria’s Super Falcon and for her current club FC Barcelona Femení.

According to the chairman of Nigeria Professional Football League (NPFL) side, MFM FC, Godwin Enakhena, Oshoala earns N7million monthly – almost 7 times more than what she was receiving at Arsenal Ladies. What is known about Asisat Oshoala salary at Barcelona is simply the fact that there was a massive pay rise in February 2020. This was because of a collective agreement on pay and conditions that guarantees a minimum salary of 16,000 euros for women footballers which was signed by Spain’s top women’s division.

Oshoala is a good example for aspiring female footballers, with the support of the Lagos state government she set up the Asisat Oshoala Foundation to help youngsters seek after their football dream and give them the necessary chance she never had.

In 2019, Barcelona and Asisat Oshoala signed a Memorandum of Understanding with the official licensee of Barça’s Academy in Lagos, Nigeria.

She facilitated the Football4girls competition in Lagos in December with the intention of bringing aspiring female players to the limelight.

BBC Women’s Footballer of the Year: 2015

And if you prefer, you can tweet at her @asisato1