A diaspora group, Anambra State Association in Liberia (ASA Liberia), led by Chief Sir Cosmas Okechukwu, has called for the establishment of a Diaspora Village in Anambra State to aid in boosting relationship with their families down here and to enable those in diaspora to interact and do business, as well as to help ease the problem of sending money home.

The group which said they came on a familiarization visit to the Ministry of Tourism and Entertainemnt, Anambra State, disclosed that the delegation was sent on the mission by their main body.

‘We are here to introduce the generals we have so that if you don’t see me you can relate with others,’ Okechukwu told the Ag. Director of Diaspora Affairs and Entertainment, Comrade Nneka Nwankwo, who stood in for the Commissioner for Tourism and Entertainment, Mr Don Onyenji. 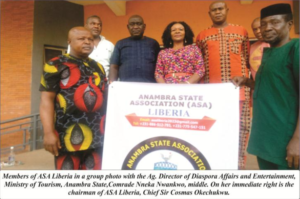 Okechukwu who insisted that having a Diaspora Village would aid them in relating with their families, also pleaded for what he called a Diaspora Day to be held on a generally acceptable date so that many could partake of it, even as he thanked the ministry for past assistance.

For his part, Sir Jude Ewim, a member of the group, expressed concern about the insecurity in the state, noting that such could even affect the holding of the Diaspora Day, and urged the state government to find out the root cause of the situation to enable those outside to be coming home.

Chief Pius Amakeze, who was also in the delegation, expressed concern about what he described as false social media postings whereby what happened elsewhere were attributed to the home front and urged the government to always assure diasporans of their safety to encourage them to come home during festive periods.

Responding, Mrs Nwankwo expressed happiness at their visit, noting that she always cherished establishing relations with Anambra people outside.

She praised the chairman of ASA Liberia for his zeal and efforts to make things happen for his group, even as she harped on the need for diasporans to go through the right channels in all they did and to make the ministry part of their programmes in Liberia.

On the request for a Diaspora Village, she said it had been a long standing issue from the past governments but regretted that frequent change of commissioners had affected the implementation of such things, even as she appealed for patience with the new government so that it would settle down.

She said the new government of Prof Chukwuma Soludo was well versed in diaspora matters and was interested in their affairs.

Mrs Nwankwo recalled efforts of government to fix roads and other projects, noting that it was why the governor needed taxes.

‘I’ve seen many impressive things within this short period he’s been in power and we need the support of diasporans to achieve the governor’s vision,’ she said, while urging them to bring the good things they had in their places home to aid in the development of the state in order to make the homestead enjoyable for all.

The Acting Director said the Diaspora Day in Anambra was earlier fixed for August so that it would fall within the period of the national version of it so that people could easily come down to the state from there.

She maintained that Anambra remained the safest state in the Southeast in security and lauded the governor’s efforts in that direction; charging the diasporans to contribute their own quota in security as no one person could tackle the issue alone.

‘We want the best for Anambra so that everyone will be Happy,’ she disclosed, pointing out that the state now had an entertainment ministry because of the importance attached to it by the Soludo government.

Mrs Nwankwo recalled efforts by government to promote entertainment through fairs and other such programmes.

Highlight of the visit was the presentation of souvenirs to Mrs Nwankwo by ASA Liberia containing her pictures taken during her visit abroad at a diaspora event.