As We Celebrate Christmas…

The many faces of Christmas celebration in Igbo Land. We should use this period to fix some of our pressing problems.

It is Christmas once again. It is the period that means a lot to the people of Eastern Nigeria. They do not joke with it. From far and near, they converge on the home front; sometimes even those who have not been home for years.

Don’t however, for one moment think that the heightened activities in this period are borne out of religious fervour. No. In fact, 90% of those who will be rushing home for Christmas and involved in one activity or the other, are not doing so because they want to celebrate the birth of Jesus Christ, our Saviour.

No way! Many of them may not even know the meaning. But they are all rushing home because of what the period offers: chieftaincy title taking, reunion with friends and family, traditional marriages, weddings, parties, launch of dance groups, umunna meetings, fund raising, political campaigns; and, most importantly, a chance to show off, among many other mundane things that have no relationship with what Christmas really represents. But all follow, as we often say here.

However, as the Igbo Nation prepares to once more celebrate whatever they want during this period, there are some things that should be occupying the front burner of our deliberations this period in order to put things right. Let me outline some of them. 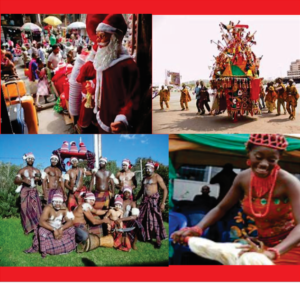 It is said that only a fool does not know when danger envelopes him. In this vein, any Igbo man who does not appreciate the looming danger the Igbo Nation is faced with, is certainly living in a fool’s paradise. The other day, many of us saw gory pictures of Igbo people slaughtered in Eha Amufu, Enugu State, by suspected Fulani herdsmen. It was not as if that was the first time such would be seen. But each time, the feeling we get is a people who are powerless to save themselves from foreign invaders.

But should this be the case? Why can’t the people mobilize and fight back and return fire for fire? Why submit tamely to the invaders like sheep heading to the abattoir? If the Nigerian security apparatus cannot fend off these invaders, what’s stopping the natives from rallying themselves and taking the fight back to them?

What’s stopping our famous Eastern Security Network from confronting the killers, especially after we were told they were formed to protect our people? Or are they just interested in propaganda, ruining the economy of the Southeast and killing their own folks? What about the Ebubeagu Security Outfit formed by the governors of the Southeast? What has happened to them after the initial hoopla?

These are things our people should seriously deliberate on in this period and come up with modalities with which to stem the danger that is creeping up on us as a people. Without security, many people will be unable to come home as I’m sure many will not this time. Thus, every community must embark on serious security deliberations aimed at safeguarding them and the larger Igbo Nation.

My insistence on communities taking the lead is anchored on my belief that every crime is local. Except long range missiles are fired into such communities, the perpetrators usually operate from within and unless the members of that community are mortally afraid of them, they can’t say they don’t know them.

So, we should use this period in our various communities to map out plans to effectively crush these bad elements the way we used to do such back in the days. After all, is it not said that one individual cannot be stronger than his community?

If nothing is done now to check the activities of these hoodlums, we may soon have a situation where some communities would be sacked by them. Sounds fantastic? It may sound so now, but I’m sure the communities in Benue State and other parts of the north will not think so. The time to act is now. Let’s not jollify and forget the looming danger, lest we are caught napping while we eat and booze.

Yahoo and Yahoo Plus

These two have constituted twin terrors in our social space these days. Many young men no longer understand the virtue of hard work and tend to see the few who still work hard as foolish. The craze to make money has led our young men to embark on all manner of atrocious acts. Within the past three weeks in Awka, have come reports of men raping men for ritual.

One of them involved two men who asked a keke driver to take them to a place only for them to gang rape him when they got there. They say it is the latest form of money ritual in town. But it shows young people who have sold their souls to the devil and no longer act like humans.

But more saddening is the fact that all these horrible acts are being done to buy recognition from society. Once these young fellows get money through any dubious means, their communities will give them chieftaincy titles even when they know how they made the money.

They will also attend church bazaars and buy up everything while everybody cheers and claps for them; again even when they know the source of their money. Thus, I’m constrained to ask, mmadu anozi kwa ya eee?

This is therefore another area that communities should focus on during this period. They should agree to stop according any form of recognition to these boys; be it titles, knighthood or being made bazaar chairmen. Whistle blowing against them should be made from the communities.

Anyone who thinks it does not bother them may just realize soon enough that their beloved ones have fallen victims to them. The ancient communal spirit of rejecting evil and evil people should be resurrected as the times are dire.

No one boards a keke or shuttle bus these days without praying against being kidnapped for ransom, being killed for ritual or being robbed. That’s how bad things have become. Should we therefore fold our hands and watch? The choice is ours.

Yes, this is a very important point. It does not matter which party one belongs to or whether one is apolitical. But the Nigerian situation, especially as it concerns the Igbo Nation, has made it mandatory and commonsensical that we all support the presidential ambition of Peter Obi of Labour Party.

While we can choose to vote for any other candidates of our choice in other positions, the Obi option is one that should not be compromised.

Obi represents the best and only hope for the Igbo Nation to return to reckoning. Forget what anyone may say to the contrary. Forget what some would tell you that the time is not ripe for an Igbo president to emerge. This is the best moment for the emergence of an Igbo man as the president of the country.

Luckily, in Obi, Igbos have a man who is more than prepared to give those who have run Nigeria aground a run for their money. As I wrote earlier on this page, Obi is the best choice, no matter the parameter to be used. He is younger, more knowledgeable and without baggage.

He also comes from a zone (Southeast) that can lay a genuine claim to the nation’s number one seat. So why should any Igbo man not look Obi’s way in the coming presidential election?

It has even been made easier by the fact that the vast majority of other Nigerians are all rooting for Obi. And if others are supporting him, why would not his own people do so?

For those who do not like Obi, I’ll like to tell them not to see the quest for the presidency by Igbos as being about Obi. Obi is only a vehicle to be used in getting there. It could have been any other Igbo man if that man is as equipped and as qualified for the position as Obi.

For example, if Ogbonnaya Onu of Abia State had won the primary election of the All Progressives Congress, APC, and been their presidential standard bearer and also enjoyed such national and international support as Obi is getting, I’m sure Igbos would have been left with no choice than to back him, even though he is in APC.

But we all saw how the two major parties treated Igbo aspirants as if they did not matter, despite it being a time it is clearly the turn of Ndigbo to gun for the presidency. If not for Obi, no Igbo voice would have been heard today. It would have been a choice between two sides of a bad coin as the candidates of APC and PDP represent. But as fate would have it, Obi survived their treachery in the PDP Primary and is today the greatest headache of the old, corrupt order.

Let’s add to their headache by proclaiming in the churches, village meetings, markets and everywhere this yuletide that it is mandatory for every nwafo Igbo to vote for Obi. He represents the last hope for the political emancipation of the Igbo Nation. It is as clear as broad daylight and anyone not comfortable with him is merely scheming for their private interests.