Humanity is the climax of God’s creative activities. Thus God said, “Let us make man in our own image and likeness and let them have dominion over the fish of the sea, and over the bird of the air, and over the cattle, and over all the earth, and over every creeping thing that moves upon the earth.

So God created man in his own image, in the image of God he created him; male and female he created them” (Gen. 1:26 – 27). God moulded the first man Adam from the soil of the earth and breathed upon him and he became a living being. But when it came to the making of the first woman, Eve, God changed method. He moulded Adam and fashioned Eve by taking one of the ribs from the side of Adam whom God made to fall into a deep sleep.

God closed the ribs with beautiful flesh and brought her to the man Adam and he was intoxicated with joy as he exclaimed, “This is the bone of my bones, and the flesh of my flesh.

She shall be called a woman, because he was taken from man” (Gen. 2:23). From all indications, the making of man was simple while the making of woman was complex. No wonder women are beautiful and men are handsome. Beauty consumes much time while handsomeness takes less time to achieve.

Some women go by the nickname Beauty or Fashion. Thus all women are fashion oriented. They apply different types of make-up to remain beautiful. Their bodies, especially their faces, are their constituencies. They spend much money in fashion and make-ups. Men make down while women make up. Down symbolizes the pocket while up symbolizes the face.

Hence, men admire women’s faces while women admire men’s pockets. In other words, the beauty of women lies in their faces while the handsomeness of men lies in their pockets. If an ugly man is rich, then he can befriend or marry the most beautiful woman. On the other hand, if a man is very handsome but poor, then he can hardly get a woman to befriend or marry. 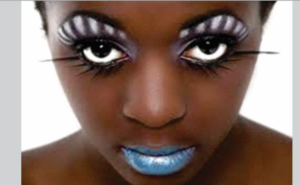 Many rich disabled men have beautiful women as wives or girlfriends. Rarely can you see disabled beautiful women being married to men with heavy pockets. In the dictionary of women, the word ‘beauty’ is very common while in men’s dictionary the word ‘money’ is all over the pages. A man who marries or befriends a beautiful rich woman becomes her houseboy. This is part one, scene one.

Now let us explore into part one, scene two. It is not an overstatement to say that women are insatiable with regard to beauty and money.

Women’s make-ups continue to take different dimensions with the passage of time. It seems that women discovered that God made some mistakes when he was fashioning them. Nowadays, most women use artificial materials and methods to compliment or erase their natural endowments. God is watching.

Do you know what makes the monkey to be ugly? It is the eyelids. When you see a monkey, look at its eyelids and see by yourself. On the other hand, the eyelids enhance women’s beauty. These are well decorated and clustered hairs above the two eyes. Men and women possess them.

It is an idiomatic expression in Igbo language to say that someone does not have eyelids. It means in essence that someone has lost the sense of shame. It baffles me when I observe that some women, if not most, shave their eyelids these days. After shaving them, they use eye black pencil to draw artificial eyelids which is changed from time to time. Recently I saw a lady who drew the figure of a scorpion as her eyelids.

I did not mince words to call her scorpion lady. She looked at me fiercely and shouted, “Foolish man! Does it concern you?” I retorted, “It concerns me. Why are you distorting God’s handwork? I wish that you turn instantly into a scorpion.” She cursed me and shouted, “Back to sender!” I quietly walked away and reported to God my sender.

They are longer and bushy. The attachment is done with the use of gummy and corrosive chemical. Not long ago, a certain lady lost her two eyes to the corrosive chemical during the process of attachment. The chemical entered into her eyes and perpetually blocked her sight. Since then she is wailing and regretting, “Had I known!” She was rushed to popular eye clinics for remedy, but all to no avail. A woman who attaches them looks like a ghost. She continues to blink her eyes at a higher rate like a mad woman.

I was in a city few weeks ago when an emotional drama was watched by passersby. A tall elegant lady was walking majestically with extraordinary buttocks behind. She became the center of attraction. Even motorists stopped to admire her. Unfortunately she missed her steps and fell down flat because she was putting on very high heel pair of shoes. In fact she fell like an iroko tree.

The unexpected happened because pretense does not last. Hardly did anyone know that she was putting on artificial large buttocks. The sudden fall made the artificial buttocks to change position by shifting sideways. In other words, they fell out of alignment. Instantly the passersby and motorists surrounded her like spectators in a football match. Laughter nearly strangled me.

The lady was filled with shame as she now possessed two sets of buttocks: the natural normal ones and the artificial bigger ones. To avoid further embarrassment, she ran into a nearby forest and disappeared like a ghost. Already some of the spectators snapped her with their mobile phone cameras and the shameful scenario has gone viral.

The hair fashion that is reigning presently among women is very funny. It is the long rope hair attachment. Some are moderate while some are overlong and touch the ground from behind. A certain beautiful girl with ground-touching rope hairs came home to spend one-month holidays with her grandmother. The mother was furious over the long attached rope hairs.

One day, her goat cut the rope on which it was tittered and it was wandering and destroying her crops. She had no spare rope at home. An idea got into her mind. She quietly sneaked into her granddaughter’s room as she was taking deep siesta. The grandmother cut two of the attached overlong rope hairs of the granddaughter. She put the two together and used them to tie the goat.

When the granddaughter woke up, she found out that two strands of her attached overlong hairs were missing. She thought that a witch had done it when she was asleep. Hence she screamed. The grandmother ran in and asked her what was amiss. She narrated her ordeal. The grandmother told her that she cut the two strands of her hairs and used them to tie her wandering goat. She cried and shouted, “Grandma, you are a witch!”

In the animal kingdom, eagles and kites hunt by means of their sharp and long nails. The nails and teeth of lions and leopards are weapons used to devour their prey. Men and women are also endowed with nails at the tip of their fingers. They can grow wild.

But as rational beings, they are cut from time to time. We use the tips of the finger nails to scratch the body when need arises. Some women of nowadays attach longer artificial nails to the natural ones as fashion. I wonder how they prepare food or eat manually.

A certain married lady normally brandished her long nails as weapon against her husband whenever they had quarrels. One day she pierced his two eyes with the attached long nails. The husband went instantly blind till today. The wild nail lady was charged to court for attempted murder. She was convicted and sentenced to life imprisonment. Men, beware of long-nail ladies! Artificiality has turned some ladies into beasts.