Several hours before the beginning of 2021, a 9-year-old Argentine boy was saved from a stray bullet by a small metal crucifix on his chest, an event that local media have called “a New Year’s Miracle.”

According to a report from the police office of San Miguel de Tucumán, capital of the Northwestern province of Tucumán, “the event took place around 10:00 pm on December 31, 2020: a 9-year-old boy named Tiziano, from the neighborhood of Las Talitas, checked in with his father into the ER of the Baby Jesus Hospital in the southern part of the capital city with a superficial wound in the thorax, produced by a firearm.” 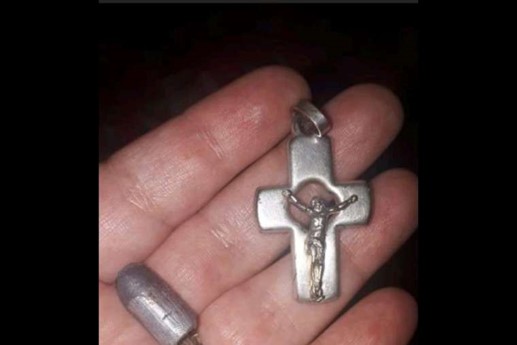 “After being checked thoroughly by several doctors on staff for 48 minutes, the boy was released,” the report says.

Tiziano’s family contacted José Romero Silva, a journalist from Telefé, Jan. 1 to explain how the boy’s life was saved: the bullet hit in the middle of the small metal crucifix that the boy received as a gift from his father. Tiziano’s aunt sent Silva a picture of how the bullet damaged the crucifix, which prevented the bullet from causing any real damage, except for a minor superficial wound.

Silva shared the picture in his Twitter account, writing: “New Year’s Miracle: yesterday, minutes before 00 hours a stray bullet hit the chest of a boy from Las Talitas. But it hit in a crucifix the minor was wearing.”