Argentina had famously blown a two-goal lead before eventually emerging victorious in their last World Cup final triumph 36 years ago, but there appeared little prospect of a repeat of that scenario.

However, the French were suddenly given hope when they won a penalty 10 minutes from time as Kolo Muani was brought down by Nicolas Otamendi.

Mbappe smashed the spot-kick into the net and the watching French President Emmanuel Macron rose to his feet. France had hope, and within another minute they were level. 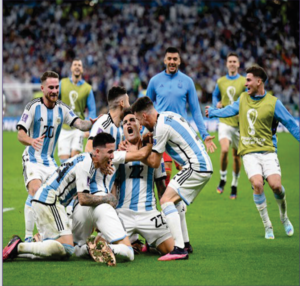 Messi was robbed of possession by Coman in the lead-up before Mbappe found Thuram and then met his partner’s knockdown with a stunning volley.

It will go down as one of the most dramatic moments in World Cup History, and the French players on the bench raced across the pitch to celebrate with their teammates.

Argentina, who lost the 2014 final in extra time, looked shattered, and yet it seemed again that they had won it when Messi followed up to score early in the second extra period after Lautaro Martinez’s shot was saved.

But France were again saved by Mbappe as he converted another penalty following a Montiel handball.

It was end to end, and Argentina needed a brilliant Martinez save from Kolo Muani to take it to penalties and Montiel’s kick proved decisive to sparking wild Argentinians’ celebrations.